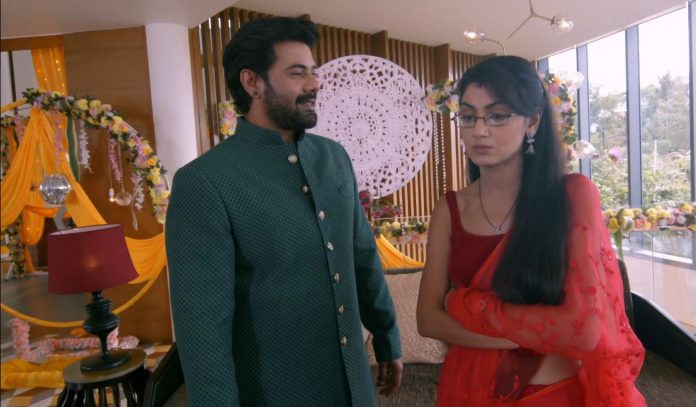 Kumkum Bhagya 3rd June 2021 Written Update Robbery Tanu warns Abhi against ignoring her and her love. Abhi acts sweet towards her. He tells that he will not dare to ignore her love. Pragya asks him not to do overacting, else Tanu will suspect him. She asks him to act within limits. He tells that his acting is affecting Tanu as well as Pragya. He finds Pragya getting jealous. Pragya tells that she doesn’t want Tanu to see them together. He enjoys her jealousy. She refuses to fix the broach. He tells that he won’t go without it. She asks him to do anything. Abhi asks Tanu to apply some mehendi.

Tanu asks for the DJ, it doesn’t look like a marriage function without any music. Abhi tells that he will sing for her, he doesn’t need a DJ. Pragya tells Tanu that there should be many songs to set an atmosphere. Abhi tells that Pragya will see him teaming with Tanu. Pragya asks him to do anything. Somdutt wants Tanu to give his money. Rhea excuses herself from the Antakshari. She doesn’t see Prachi in her room. She rips Prachi’s outfit to keep Prachi away from Ranbir.

Prachi doesn’t intend to please Ranbir by dressing up for him, but Rhea doesn’t understand it. Aaliya wants to ensure that Rhea gets Ranbir’s love and loyalty. She knows that Ranbir maybe loyal towards Rhea after marriage, but he won’t be able to love her. She wishes she could help Rhea and save her from a failing relationship. Abhi asks Pragya to be happy for the family. Pragya awaits Prachi, who isn’t aware of Rhea’s deeds. Tanu asks Somdutt not to trouble her for money, and instead get the jewellery from Abhi. She wants to get rid of Somdutt’s blackmailing. Somdutt knows the truth of Pradeep’s death. He keeps Tanu’s crimes a secret. Will Somdutt get caught while making a robbery attempt? Keep reading.

Reviewed Rating for Kumkum Bhagya 3rd June 2021 Written Update Robbery: 3/5 This rating is solely based on the opinion of the writer. You may post your own take on the show in the comment section below.