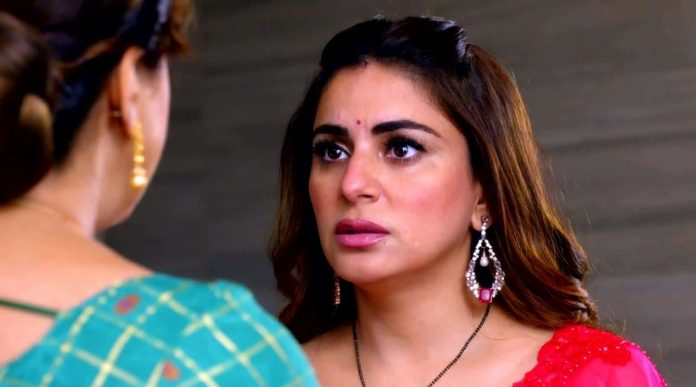 Kundali Bhagya 10th June 2021 Update News for Preeta Preeta also requests the inspector to allow Sarla to meet Karan. Inspector tells that he is just doing his duty, he can’t decide if Karan is guilty or innocent, the court has to give the verdict. Sarla asks him to see Karan’s face and judge it himself. He asks Preeta to take away her mother. Sarla grows restless. Inspector leaves after his shift ends. Sarla tells Preeta that she is feeling really nervous, she wants to see Karan once. Preeta asks her to just let it be.

She pacifies Sarla and takes her home. On the other hand, Sherlyn is tensed because of Megha’s threats. She recalls the recent happenings. Rakhi finds Sherlyn sick. She helps Sherlyn take care of herself. Prithvi wants to meet Sherlyn, and stays outside the door when he sees Rakhi. Rakhi knows that Sherlyn is missing Sanjana. She tells that she is also like her mother, and asks her if she is worried for something. She tells Sherlyn that she can sense the upsetting conflict she is facing. Sherlyn doesn’t want her face to show her real intentions.

Rakhi insists her to share her tensions once, instead of lying. She knows that there are mood swings happening in pregnancy. Sherlyn states that she isn’t well. Rakhi asks Sherlyn not to get worried by the people’s behavior. She wants Sherlyn to share the matter. Sherlyn tells that she was feeling low since she couldn’t meet her mom. Rakhi hugs her to fill Sanjana’s place. She tells that she will call Sanjana home.

Sherlyn asks Rakhi not to call Sanjana, she will not be able to come. She wants to see a doctor soon. Rakhi takes a doctor’s appointment for her. She calls Kritika’s friend, Dr. Deepali for Sherlyn’s check up. She asks Sherlyn to take rest without any tension. She wants to accompany Sherlyn. Prithvi knows that Sherlyn will drag him to the doctor tomorrow. He realizes that Sherlyn is tensed about the money. Meanwhile, Preeta tells Shrishti that Sarla couldn’t meet Karan. Shrishti tells that she would have made Sarla meet Karan at any cost.

Sarla tells that Shrishti would have created a scene there. Preeta adds that even Sarla argued with the inspector. Sarla feels blessed to have such caring daughters. Shrishti calls up Sameer to ask him if she is his true friend or not. She asks him if he loves her, does he value her. He asks her what’s the matter. She asks him to accompany her to meet Karan. Sherlyn thanks Rakhi for the care. Rakhi asks Sherlyn to call her in the hour of need. Rakhi makes a leave, while Prithvi acts emotional to confront Sherlyn about the sweet talks.

He warns Sherlyn not to love the Luthras. He reminds their revenge motives. He tells her that they will bring the Luthras on roads. She tells him that she didn’t forget their motives. She wants him to trust her loyalty towards him. She vows to destroy the Luthras family. She feels they are the ones who are right on their stand. She wants Prithvi to accompany her to the doctor. He agrees to her request.

Kritika speaks to Deepali, who invites her home for lunch. Kritika tells Rakhi that she wants to go and meet her friend. Rakhi asks Sameer to drop Kritika at her friend’s house. Rakhi rushes to see Preeta knowing she isn’t feeling well.

Furthermore, Sameer informs Shrishti that he will come to her house to pick her up. She mentions that Sarla had gone to his house to meet Preeta. He asks her not to take any tension. Kritika teases him seeing him talk to Shrishti. Prithvi asks Sherlyn not to take much time. She asks him to not meet him so often that they get caught.

She vents anger on Prithvi and then makes an apology. She tells that they can’t go out together. He asks her to find another way out. Preeta informs Rakhi that Karan has been shifted to a new jail. Rakhi gets too worried to hear this. She asks the reason for the shifting. She further gets enraged on knowing that nobody from the family is allowed to meet Karan.

Pammi deliberately calls Rishabh and informs him about Sherlyn’s appointment with Dr. Deepali. She asks him to make a video call to Sherlyn and support her morally. She has an intention to expose Sherlyn and Prithvi’s truth. She wishes that Rishabh learns the bitter truth. Alongside, Preeta asks Mahesh to take his medicines always on time. She knows that Rakhi and Mahesh will always support her. They share a sad moment when they miss Karan. They recall the times spent with Karan. Rakhi tells them that they shall visit Karan together and surprise him.

Preeta tells them that she won’t go with them. This makes Rakhi worry. Rakhi asks the reason for Preeta’s refusal. Sameer drops Kritika at her friend’s house and finds them spending some fun time. He goes to meet Shrishti. Sherlyn calls up Dr. Deepali, who asks her to come at her house, instead at the hospital. Sherlyn lies to her that she is coming along with her husband. Prithvi asks Sherlyn why did she lie. He doesn’t want to fall into any trouble. He rebukes her further.

Reviewed Rating for Kundali Bhagya 10th June 2021 Update News for Preeta: 4/5 This rating is solely based on the opinion of the writer. You may post your own take on the show in the comment section below.