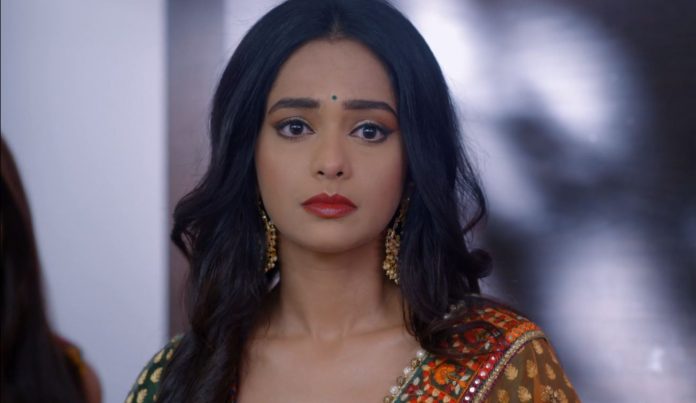 Kumkum Bhagya 17th June 2021 Update Twist for Prachi Prachi’s huge sacrifice gets known to Aryan because of Shahana. Prachi has made the sacrifice for the sake of her parents Abhi and Pragya. She also didn’t believe in their love strength and thought that she should become the angel to unite them by accepting Rhea’s deal. She has seen Rhea posing problems for Pragya. She knows that Pragya is with Abhi just because Rhea is supporting Pragya now. Rhea has kept her promise and supported Pragya against Aaliya and Tanu. Prachi wants Pragya’s happiness, after seeing Pragya crying all her life for Abhi’s love.

Prachi’s big sacrifice for her parents finally comes to the core. Aryan can’t keep the truth to himself. He tells Shahana that he will not let Prachi and Ranbir sacrifice their love for others. He realizes that Ranbir loves Prachi the most, and he won’t be staying happy if he marries Rhea.

Ranbir is just making a compromise by marrying Rhea, he knows that he won’t be finding any love and happiness in his marriage, still he agreed after the heartbreak by Prachi’s rejection. Aryan tells Shahana that he won’t be cheating Ranbir by hiding the truth, Ranbir has all the right to know the truth, its concerning his entire life.

Aryan heads to Ranbir to tell the truth. Ranbir learns the truth of Rhea blackmailing Prachi and snatching her true love. He loses his cool when he confronts Rhea to know if she has hurt her own sister for the sake of her obsession. He tells Rhea that she doesn’t love him, else she would have sacrificed her love and let him free just the same way like Prachi did.

He tells her that she is nowhere close to Prachi, she can never be like Prachi, who is so loving, caring and sincere in her relationship. Rhea is in deep shock when he tells her that he will be going to the temple where Prachi has gone with Pragya to get their Varmala. He adds that he will be marrying Prachi at the temple, and nobody could dare stop him this time. He is confidence that even Pallavi and Abhi will support him on knowing Prachi’s sacrifice. What will happen next? Keep reading.

Prachi meets Shahana and tells her that she can’t tolerate the sight of Ranbir marrying someone else. She tells that she can’t see Ranbir getting married to Rhea right in front of her eyes. She tells that she is going to the temple to demand answers from the Goddess about her Bhagya. She wants to know why the fate has been so unfair towards her, she didn’t get her father’s love at first and now Ranbir. She cries a lot while sharing her sorrow with Shahana.

Aryan gets there to overhear their conversation. He realizes that Shahana was right about Prachi, who had sacrificed her love like nobody could ever imagine. Aryan and Shahana rush to meet Ranbir and tell him the truth. Aaliya tries hard to stop Aryan, but he still reaches Ranbir. He finally breaks out the truth to Ranbir that Prachi really loves Ranbir a lot. He asks Ranbir not to lose a gem like Prachi, who understands the real meaning of true love. He tells everything about Rhea’s deal to Ranbir, which leaves the latter engaged.

Ranbir barges into Rhea’s room to confront her, when she expects him to compliment her. He tells her that he is going straight to the temple to marry Prachi, the girl who deserves his love. Rhea pleads him to not go, but he doesn’t entertain her anymore. He leaves from there, while Rhea calls up Abhi to tell her sobbing story. She asks Abhi to get back Ranbir to her at any cost. Abhi promises to bring Ranbir to Rhea. Abhi doesn’t know the entire love triangle. Rhea feels she has failed to hold her grip on Ranbir. She couldn’t stop him from going to Prachi.

She breaks down emotionally, while accusing Prachi of wooing Ranbir back just before the marriage. She tells the family that Prachi has snatched Ranbir from her. She blames Prachi for ruining her life. Ranbir reaches the temple to meet Prachi. He finds Prachi there. He tells her that he got to know the truth of Rhea’s blackmailing. He adds that Prachi was forced by Rhea to leave her rights on her love. He sympathizes with Prachi for tolerating everything alone. He asks Prachi why didn’t she confide the truth with all the faith.

He asks Prachi to marry him if she respects their true love. He convinces Prachi with a promise that nobody can separate them from now, not even his parents. Prachi gives in to his request. She tells Ranbir that she was holding back her feelings just because of her promise to Rhea. Upon feeling free to express herself, she confesses love to Ranbir. They have a happy love moment and share a hug. Rhea exhibits her madness and anger by destroying the mandap before Ranbir comes back. Tanu worriedly calls Abhi to tell him what Rhea is doing at the farmhouse. She asks Abhi to get Ranbir as soon as possible.

She tells him that he should return home if he couldn’t find Ranbir. Abhi doesn’t understand what’s going on. He calls up Pragya to inform her that Rhea’s marriage has been halted because of Prachi. He also feels that Prachi could be the reason for stopping Rhea and Ranbir’s marriage. Pragya doesn’t think Prachi can ever come between her sister’s happiness. She defends her daughter. Tanu thinks its the right time to get into Rhea’s good books, when Pragya will just defend Prachi. She shows much concern for Rhea to get her faith.

She sends Pradeep to the temple to find out what’s happening there. She asks him to record everything and send her the video soon. Pragya arrives at the temple to get the garlands for Ranbir and Rhea. She finds Prachi with Ranbir. She angrily slaps Prachi when she gets moved by the sight of Prachi and Ranbir getting married. She asks them to stop the marriage right away. Ranbir couldn’t stop himself from defending Prachi. He tells Pragya how Rhea had manipulated Prachi to break them apart.

He adds that he just loves Prachi, and even Prachi loves him, Prachi had sacrificed her love for Pragya’s sake. Pragya’s heart melts down on learning Prachi’s sacrifice. Ranbir asks Pragya to bless Prachi and him, and be a part of their marriage. Pragya agrees to bless them, unaware of Abhi’s reaction on their marriage. Which side would Abhi choose on learning the entire truth? Will Rhea turn evil once again? Keep reading for further news and updates. Comment your views on this surprising twist.

Reviewed Rating for Kumkum Bhagya 17th June 2021 Update Twist for Prachi: 3/5 This rating is solely based on the opinion of the writer. You may post your own take on the show in the comment section below.