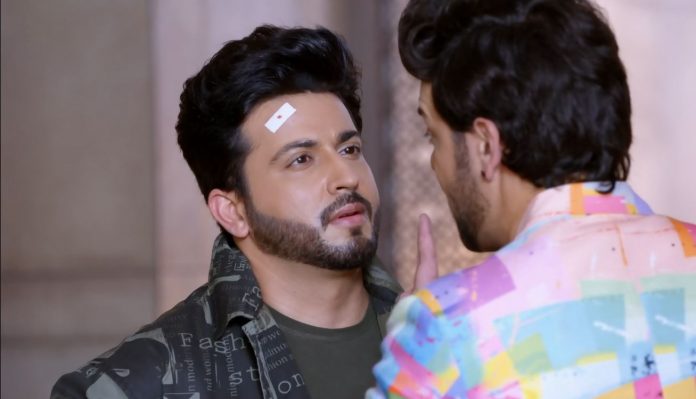 Kundali Bhagya 17th June 2021 Written Update Karan in peril Prithvi and Sherlyn have no idea that Karan is at the home. He wonders where did the entire family go. He thinks if Kritika told his truth to the family. He doesn’t want to face the family and answer them. He is confident that he had turned Kritika guilty by making a story. He likes Kritika’s innocence. He knows that Kritika will cry and never doubt him again. Sherlyn asks Kritika about her fight with Prithvi. Kritika regrets to hurt Prithvi by blaming him badly. Sherlyn tells that he is sensible to forgive her.

Sameer replies that Sherlyn isn’t at home. Karan and Preeta find Sherlyn at home. Karan asks Sherlyn if she isn’t happy to see him. He adds that police released him knowing the real killer is someone else. He shocks her saying the police is coming to arrest her. Sherlyn asks him what does he mean. Preeta and Shrishti show up the evidences. Sherlyn asks them to at least think of her pregnancy. Preeta tells that she can’t spare Sherlyn if she is the real killer. She doesn’t want Sherlyn to use her pregnancy as a shield.

Karan tells Preeta that he wants to be alone for some time. He is worried for Rishabh. He can’t tell Rishabh that Sherlyn is a murder suspect. Prithvi comes across Karan. He asks Karan how did he come home so soon. He begins insulting Karan by his worst liners. He asks Karan how did he come, either by bribing the police or breaking the prison. Karan tells that he has escaped from the prison. Prithvi tells that Karan has done a crime, he has to pay for it. He provokes Karan further. Karan doesn’t want to waste time.

He angrily pushes Prithvi when the latter hurts his emotions. Kritika meets Karan and is glad to find him home. Karan tells that he didn’t get released from the jail. Prithvi acts too hurt. He gets Kritika at his side. Prithvi tells that he will tolerate Karan’s anger. He adds that he loves Kritika, but she doesn’t love him, since she suspected him. He asks her to form trust before loving him. She apologizes to him. He tells her that he will forgive her for the last time. She feels sorry. He asks her to give him some time alone.

Sherlyn is stressed out seeing the evidences against her. She fears of Preeta’s warning. She meets Prithvi to tell him what Karan told her. He asks her not to spoil her mood. He tells that murderers aren’t scared of anyone. He adds that they both are the ruling evil in Karan and Preeta’s lives. He encourages Sherlyn to know that they are the smartest, they will fool the Luthras, they are powerful and will easily outwit Karan.

He tells her that they will prove Karan as the murderer. He boasts of his plan to fool Kritika. She tells him that she lied to Deepali to take things under control. Prithvi tells that they will inform the police about Karan’s escape. He also wants to change the story’s climax. He knows that Karan and Preeta can find out Akshay’s murderer if they are together. He asks Sherlyn to become superpower by supporting him. He wants to protect themselves. He tells her that they need to prove Karan guilty in the murder case. Sherlyn realizes that he is saying right. She asks his plan to send Karan back to the jail.

He shows his spare phone to call the police. He thanks her for saving him from Kritika. He promises to protect her. He calls the police and informs about Karan’s location. Prithvi tells Sherlyn that Karan will be going back to the jail with an additional charge of escaping from the police. Inspector arrives at Luthra house to find Karan. He asks Rakhi and Mahesh not to fool the police by hiding their son at home. He tells that he is just doing his work, and won’t spare anyone who comes between.

Mahesh fears that his family will lose reputation now, with Karan’s escape news coming out. Prithvi threatens Karan once again. Karan doesn’t think Prithvi can succeed in harming him. Mahesh and Rakhi trick the police once again by hiding Karan in time, but get afraid that things may go out of their hands. Mahesh asks Preeta to convince the family to send Karan back to the police station. What will Preeta do now? Keep reading.

Reviewed Rating for Kundali Bhagya 17th June 2021 Written Update Karan in peril: 3/5 This rating is solely based on the opinion of the writer. You may post your own take on the show in the comment section below.