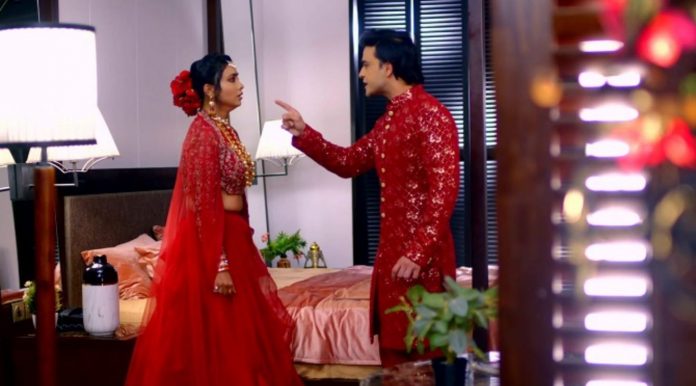 Kumkum Bhagya 16th June 2021 Written Update Ranbir declares Aaliya questions Pradeep if he isn’t Tanu’s husband. He tells her that he would have killed Tanu if she was his wife. He adds that Tanu is paying him money because he is her family member. She asks him how is he able to blackmail Tanu. He tells her that she can’t know his truth, until he tells it himself. He asks Aaliya not to stress herself. Tanu plans to romance Abhi. He fails her plans by snoring a lot. Pragya gets disturbed with the thought of Abhi and Tanu’s marriage.

She checks her room well to know if there is any clue of the person who attacked her. She gets Aaliya’s kerchief there. She realizes that Aaliya had rendered her unconscious. She confronts Aaliya about the kerchief. Aaliya realizes that she left the kerchief with the hired attacker. Pragya tells that she knows that Aaliya is still with Tanu, Aaliya is the back stabber, who ruined Abhi’s life. She asks Aaliya how can she cheat her own brother. She blames Aaliya for ruining everything, and separating Abhi and Pragya.

She tells that Tanu is ambitious like her, she will support her dreams as well. She isn’t sorry for fulfilling her dreams. Pragya feels Aaliya is hopeless. She doesn’t want to tell Abhi about Aaliya. She wants peaceful environment in Rhea’s marriage. She threatens to tell Aaliya’s truth to Abhi. She wants Abhi to oust Aaliya and Tanu. She tells that she will not ask Abhi to forgive Aaliya again. Aaliya takes her word lightly. Ranbir feels bad that he couldn’t convince Prachi. He hugs Pallavi and weeps. He tells that he will marry Rhea.

Pallavi asks him to believe in God’s decision, God makes soul mates. He apologizes to Pallavi. He misses Prachi a lot. Pragya and Pallavi prepare for Ranbir and Rhea’s marriage. Pragya argues with Tanu in front of her daughters. Tanu asks Pragya not to sink in depression. She is ready to take up Rhea’s mother responsibility. Pragya assures that she won’t let Rhea suffer. Rhea asks Pragya not to prove her love to anyone. Aaliya fakes support to Pragya. She argues with Tanu. Pragya asks Aaliya not to spoil the moment for Rhea.

Rhea gets pleased to get love from Abhi and Pragya. Rhea thanks Abhi for accepting Ranbir and her love. Abhi tells that she is his princess, he is proud of Ranbir and her. Ranbir tells Aryan that he is too confused about his marriage, he loves Prachi but he is marrying Rhea. He feels stressed. He wants a drink to get a relief. Pallavi finds Ranbir worried. He tells that he is very happy with the marriage, he is just being nervous.

Shahana finds him happy. She argues with Aryan about Ranbir. Aryan tells her that Prachi refused to marry Ranbir, when he proposed her. Shahana tells him that Prachi also loves Ranbir. He tells that Prachi rejected him to marry a richer guy. He curses Prachi that she will never get love. Shahana defends Prachi. She tells that Prachi is making a big sacrifice for Pragya and Abhi’s love. She reveals about Rhea’s deal with Prachi.

She tells that Rhea had asked Prachi to sacrifice her love for Ranbir, if she wants to see her parents united. She tells him that Prachi wanted her parents’ marriage, she loves them a lot, just like she loves Ranbir. She tells Aryan that Prachi is helpless because of Rhea, she has promised Rhea that she will not come in her way. She adds that Prachi can’t fight her own sister for her love. Aryan feels sorry to curse Prachi. He tells Shahana that she told the truth so late.

Pallavi and Pragya wish Ranbir and Rhea for their marriage happening soon. Prachi gets upset to see them. Rhea can’t believe that her marriage dream is getting fulfilled. Tanu creates a new drama by ruining the garlands. Pragya tells that she will arrange the garlands for the bride and groom. Tanu sends Pragya away. Aryan informs Ranbir about Rhea and Prachi’s deal. He tells Ranbir how Rhea had forced Prachi to sacrifice her love by threatening about their own parents.

Ranbir can’t believe that Rhea can stoop so low. He goes to confront Rhea. He reprimands her for making him away from his true love. He also declares that he will be marrying Prachi, not Rhea. Rhea gets a huge shock with his decision. Will Ranbir marry Prachi? Keep reading and comment your views on Ranbir and Prachi’s wedding track.

Reviewed Rating for Kumkum Bhagya 16th June 2021 Written Update New wedding: 5/5 This rating is solely based on the opinion of the writer. You may post your own take on the show in the comment section below.