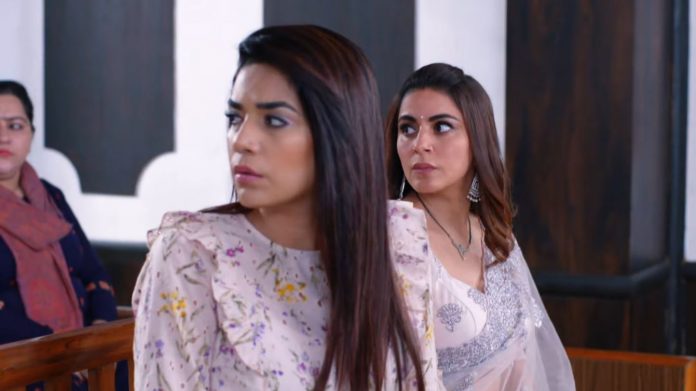 Kundali Bhagya 24th June 2021 Written Update Drama finale Sarla, Preeta and Shrishti make a prayer for Karan, that they succeed to free him from the murder blames. Rakhi is equally tensed for her son. Prithvi and Sherlyn get stressed that Preeta will be exposing their truth. Prithvi doesn’t want to get thrown out of the Luthra family, until his revenge gets fulfilled. Sherlyn also has the same motives to ruin the Luthras for the sake of her lover Prithiv. She is also scared of Preeta’s direct warning.

Rakhi prays that Karan is proved innocent in the court. She doesn’t want her son to suffer when he didn’t commit any crime. Preeta joins Rakhi in the prayers. She also prays that they get strength to expose the actual killer, even if it will break their family. Preeta knows that Sherlyn is the killer. She doesn’t know how will the Luthras react to the shocking revelation. She has to prove Karan innocent at all cost. Luthras meet Karan at the court to motivate him that he will be winning the case.

They don’t want Karan to lose our his hopes. Karan is very hopeful and confident that Preeta will clean his name. Shrishti and Preeta assure Rakhi and Mahesh that Karan will be coming home with them. They try to balance out things. Prithvi secures himself by acting concerned for Kritika, knowing she is the only member in the Luthra family who blindly trusts him. Preeta gets a witness to testify in Karan’s favor. She worries when Sameer tells her that the hote staff couldn’t come to give the statement in the court. Sherlyn asks Megha to keep her secret, and not make any wrong move. Preeta informs the lawyer about the witness.

She tells the court that Karan is innocent, he had falsely confessed the crime just to save her. Karan’s lawyer defends him further. Preeta brings out the shocking truth, which wasn’t known to the Luthra family. She accuses Sherlyn for Akshay’s murder. The entire family is shocked. They never expected the truth to be such. Preeta tries hard to get the witness to the court. She tells the man that his statement can save Karan. The man reaches the court to testify in Karan’s favor, and also expose Sherlyn’s truth. While Karan is proved innocent and also gets free from the accusation, Sherlyn falls in a deep trouble. How will Sherlyn save herself from falling in the family’s sight? Keep reading.

Preeta’s shocking allegation on Sherlyn shocks the family. Mahesh asks the reason for her allegation. Kareena objects to Preeta’s allegation and asks her if she has lost her mind. Judge asks Preeta what evidence she has against Sherlyn. Preeta tells the judge that Karan didn’t commit the murder, he took the blame on himself just to save her from the blame. She knows that the police will find the real culprit. She shares her investigations on the case. She tells the court that Sherlyn Luthra is the killer.

Kritika, Rakhi and Mahira are shocked, while Prithvi worries for Sherlyn. Sherlyn tells the judge that Preeta hates her, she got a chance to frame her. Preeta tells that she has no personal enmity with Sherlyn, she has a proof against Sherlyn and also an eye witness. She adds that the hotel staff person Rohit has seen Sherlyn leaving from Akshay’s room. She tells them that Rohit is ready to give the statement in the court. Karan’s Lawyer calls Rohit there.

Preeta had got to know about Rohit in the last minute and also convinced him to give the statement to save an innocent life. She hopes that he doesn’t lie and break his promise. Rohit tells the court that he had seen Sherlyn in the hotel before Akshay got murdered. He adds that he had seen Sherlyn leaving in a frightened state, she collided with him and behaved weirdly. Sherlyn remembers that she collides with him. She denies the truth.

Rohit tells the court that Sherlyn was behaving weird, and asked him not to die like him/Akshay when he just fell down by the collision. Sherlyn tells that Preeta is framing her to take her revenge, Rohit didn’t come in front of the court in the last hearing, he is bribed by Preeta. Preeta tells them that Rohit was scared of the murderer and didn’t wish to come. Sherlyn accuses Preeta for going against her deliberately. Preeta tells them that she doesn’t want to mix her cheap deeds in front of the family, she wants to prove Karan innocent in Akshay’s case first. She threatens to reveal Sherlyn’s dirty misdeeds.

Moreover, Judge checks the cctv footage. Lawyer tells that Sherlyn had no reason to meet Akshay, she had some suspicious activity hidden from the family. Preeta requests the judge to give the verdict on the same day and free Karan.

She tells that the culprit will get a chance to cover up the crime, Karan will be helpless to stay in the jail if there is further delay. She pleads the court to release her husband. Judge accepts the request. The judge asks the police to investigate about Sherlyn. He declares that the verdict will be given on the same day, and adjourns the court till the police submits the fresh reports. Sherlyn sinks in tension. Kareena supports Sherlyn. Rakhi tells that she didn’t know anything, but Preeta won’t lie, she would have a reason to blame Sherlyn. Preeta awaits the verdict coming after the short break. What would happen next? Keep reading.

Reviewed Rating for Kundali Bhagya 24th June 2021 Written Update Drama finale: 3/5 This rating is solely based on the opinion of the writer. You may post your own take on the show in the comment section below.