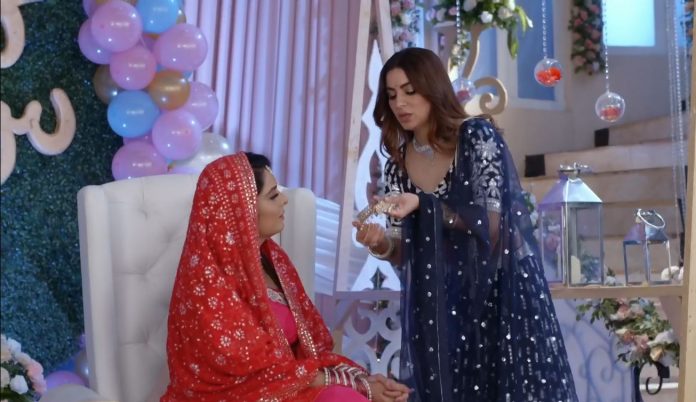 Kundali Bhagya 2nd July 2021 Written Update Revelation Preeta questions Prithvi about his dirty intentions behind proposing her for marriage, when he was already in a relationship with Sherlyn. She confronts him to know his plans. She tells him that she had always seen him expressing his wish to marry her, as if he really loves her, but he was actually hiding an affair. Prithvi tells Preeta that he had an affair with Sherlyn since their college days, he is proud of his relationship with Sherlyn, who is his biggest support.

He makes a confession like never before. He tells Preeta that the truth won’t change that he wanted to marry Preeta because he loves her as well. He adds that he was mad for Preeta after their first meet. He reveals how he had planned to have Preeta in his life. Preeta finds him sick-minded. She tells him that he isn’t loyal to even Sherlyn. She threatens to tell his truth to Kritika and stop his marriage. She sees Kritika and thinks of going to tell her. Prithvi stops Preeta from doing so.

He tells her that Kritika blindly trusts him, Kritika will never believe anyone who speaks against him. He asks Preeta not to waste her efforts. Kritika asks them the matter. He pretends to have a headache. Kritika turns caring towards him. Prithvi asks Preeta to see Kritika’s dedication towards him. Kritika takes Prithvi with him. Preeta gets too worried for innocent Kritika, who has no idea about Prithvi’s real face.

Rakhi finds Preeta in stress. She asks Preeta to take some good rest. She wants everything to be good in Sherlyn’s baby shower. Shrishti and Janki worry for Sarla’s health. They decide to not tell her anything about Sherlyn and Prithvi. They don’t want Sarla’s health condition to get worse. Meanwhile, Sherlyn gets decked up for the baby shower. Mahira seems to get jealous of her, seeing the jewellery and attire. Sherlyn faces her taunts. She asks Mahira to handle her insecurities.

She tells Mahira that she will not be able to trust her again. She advises Mahira to win her trust first, if she wants to be in her good books. Sanjana arrives home to meet her daughter. Rakhi welcomes Sanjana. Rishabh calls Rakhi. He informs that he isn’t able to come home for the baby shower. He apologizes for not doing his duty as a father. Rakhi wants him home at any cost. Sanjana wants Preeta to get out of her sight. She asks Preeta to make a cup of tea for her, and sends her away. Preeta meets Prithvi again, and turns him worried by threatening to expose his truth. She gets into an argument with him.

She adds that she will expose Sherlyn and his affair in front of the family. She shocks him by revealing the fact that she knows everything, Prithvi has fathered Sherlyn’s child. Prithvi loses his confidence and courage on hearing this. She further tells him that he needs to tell Sherlyn and alert her about this. Prithvi doesn’t waste time and runs to meet Sherlyn. He enters Sherlyn’s room and shuts the door. He tells her that he has something really important to tell her. Sherlyn and Prithvi get panicking when someone knocks the door.

Later, Preeta tells Sherlyn that she won’t be saying anything further, instead she will be showing the proof to the family, after all she got to know Prithvi and Sherlyn’s secret. She shocks Sherlyn by telling her that Prithvi has himself made the big revelation about his affair. Sherlyn can’t believe his madness. Preeta tells her that Prithvi has confessed everything in front of her. She grows Sherlyn tensed, warning that Sherlyn will lose everything once the truth comes out. She tells that Sherlyn won’t be able to face Rishabh and Luthras. Sherlyn goes away to confront Prithvi about his big blunder.

Reviewed Rating for Kundali Bhagya 2nd July 2021 Written Update Revelation: 5/5 This rating is solely based on the opinion of the writer. You may post your own take on the show in the comment section below.