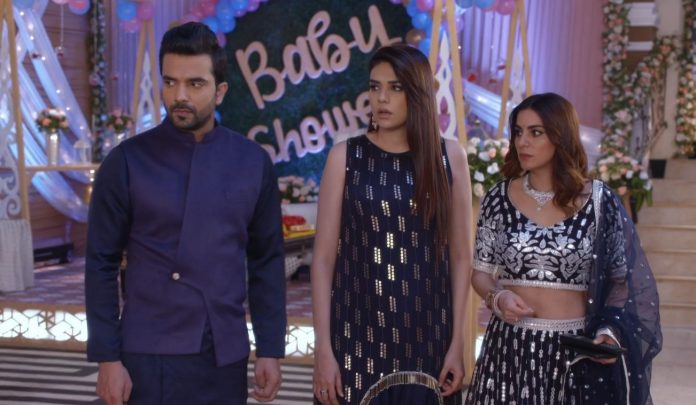 Kundali Bhagya 6th July 2021 Written Update Raging twist After being caught in a compromising situation, Prithvi gets confronted by raged up Rishabh. Rishabh ruins the decorations to express how hurt and bad he is feeling by the cheat. He casts his wrath on Prithvi, while Sherlyn gets saved in time by her choked up drama. Prithvi denies the allegations of the affair with Sherlyn.

Rishabh calms down himself in front of Kritika, knowing Prithvi is Kritika’s would be husband. He tells Prithvi that everybody wants to know the same thing, they have the same question on their mind, that the door was locked from inside. He asks Prithvi why was it locked, like something private was going on. He doesn’t want to doubt on Sherlyn seeing her state. Kritika gets too upset with Prithvi after having watched his insensitive and disgusting side to force himself on Sherlyn.

Prithvi tells Rishabh that he has no answer about the door locked from inside. He tells them that he doesn’t know anything either. He asks them not to suspect him. Preeta reveals him that the entire family has seen his drama with Sherlyn, his truth is out, his relationship is exposed. Prithvi receives a huge shock knowing about the live telecast of the drama seen by the family.

He realizes that’s the reason that everybody has suspicion for him in their eyes. He asks Rishabh whose disgusting idea was it to present a live telecast of Sherlyn and his conversation. He tells that they clearly misunderstood him, he was just concerned for Sherlyn and wanted to help her. Preeta admits that it was her idea to bring out his truth and save Kritika’s life. She tells that she had bugged the necklace worn by Sherlyn, she made the arrangements of the camera set up.

Prithvi can’t believe that sweet Preeta can turn so wise to expose his truth. Rishabh doesn’t have any anger for Preeta, knowing she will never wish wrong for him. He asks Prithvi not to question Preeta, since he isn’t in a position to confront others. Prithvi asks them to wait for Sherlyn to regain consciousness and question her. He wishes that Sherlyn doesn’t put him in trouble.

Rishabh reaches Rakhi’s room and knocks at the door. Kritika calls Prithvi, asking him to open the door. Prithvi is already worried for Sherlyn. He panics that the entire family reached. Sanjana tries to calm down Rishabh. Shrishti stops Sanjana from defending Shrishti. Preeta reaches there. She watches the video screen and finds Sherlyn getting a panic attack. She asks Rishabh to break open the door to reach Sherlyn. When the door opens, Prithvi lifts Sherlyn in his arms and runs out of the room to get her some fresh air and aid. The family rushes Sherlyn to the hospital.

They want Sherlyn and the baby to stay safe. Rishabh keeps his calm seeing the situation. Bani asks Rishabh about the room being locked from inside. Rishabh thinks of the same thing and questions Prithvi. Kritika asks Prithvi to tell them the truth. Prithvi tries again and comes up with a story to save Sherlyn and himself. He tells that he had seen Sherlyn fainting down and got worried for her, he was just offering her help. He attempts to get a clean chit in the matter.

Prithvi and Sanjana then confront Preeta for installing a hidden camera in Sherlyn’s necklace with an agenda. Preeta confesses that she had made that plan. Sanjana and Bani ask Preeta the reason for doing so. Prithvi tells them that Preeta would have had her own reasons. He defends Preeta and praises her like never before. He tells that Preeta’s actions have proved to be beneficial for Sherlyn, Preeta kept an eye on Sherlyn and got to know about the panic attack. He tells that Preeta shouldn’t be targeted by anger. Sherlyn gets treated in the hospital. The family learns that she has gained consciousness. They go to see her.

Sherlyn speaks to Preeta first. She tells Preeta that she knew about the camera. She feels happy to have failed Preeta’s plans. Rishabh apologizes to Sherlyn for always hurting her. Sherlyn acts to show a big heart and forgive him. She wants to punish Preeta for her big plan. Sherlyn and Prithvi save themselves from getting caught once again.

Reviewed Rating for Kundali Bhagya 6th July 2021 Written Update Raging twist: 5/5 This rating is solely based on the opinion of the writer. You may post your own take on the show in the comment section below.