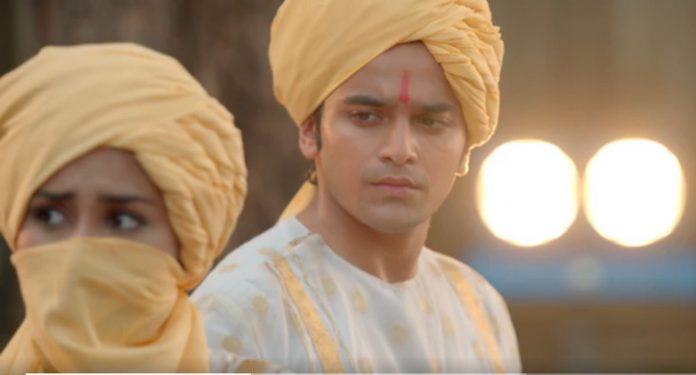 Barrister Babu 5th July 2021 Update Colors Top 3 The temple also gets partitioned owing to the enmity between Krishnanagar’s Thakumaa and Tulsipur’s Roy Choudhary’s enmity. Anirudh gets the rights for his Tulsipur people to perform special prayers in the temple by filing a petition against Thakumaa. Anirudh reaches the temple with Trilochan to worship. Bondita learns the arrival of Roy Choudharys at the temple. She deeply regrets the fact that their personal enmity has resulted in the temple division. She goes for the sword fighting practice by taking a disguise. She veils her face to reach Anirudh, knowing he won’t stand a second on seeing her. She fights against Anirudh.

Anirudh has no idea that he is fighting Bondita. He teaches her the skills. He wants to skill the women of Tulsipur so that they get self-sufficient to save themselves from any unseen dangers posed by Krishnanagar people. Anirudh feels a connection with Bondita. Bondita’s heart starts beating for Anirudh. She realizes her love for him. She wishes to get her old Anirudh back. She turns away before Anirudh realizes her identity. Anirudh grows curious to know about her. Bondita conceals her secret to stay around Anirudh and win his faith. Will Bondita succeed? Keep reading.

Reviewed Rating for Barrister Babu 5th July 2021 Update: 3/5 This rating is solely based on the opinion of the writer. You may post your own take on the show in the comment section below.

Jasmin takes a big move in jealousy when she rams her car into Fateh’s bike, leaving Fateh and Tejo injured. Firstly, she gets happy to see Fateh coming to the cafe to meet Gippy and her. She planned the meeting just to get Fateh into her sight. However, Fateh constantly praises Tejo in front of Jasmin leaving her jealous.

Fateh tells Gippy that Tejo is the best thing that happened in his life. He feels lucky that Tejo is his life partner, since she is very understanding and supporting. Gippy likes meeting Fateh. Fateh tells Tejo that they have to go for the academy work. Jasmin fails to stop Fateh. She sees Fateh taking Tejo on his bike. They both appear very happy. Jasmin realizes that Tejo has taken her place in Fateh’s life. She angrily crashes into Fateh. Fateh and Tejo suffer injuries after the mishap. Gippy rebukes Jasmin for not listening to her when he asked her to slow down the car.

Shakti:
Virat confronts Mahi for not caring for Heer. He asks Mahi to stop using Heer to save her own marriage. Soumya asks Virat to talk to Mahi with respect. Mahi believes that Soumya has filled poison in Heer and Virat’s mind against her. She adds that Virat forgot his values and manners because of Soumya’s instigation. She accuses Soumya for ruining her life.

Virat asks Mahi not to double his problems. Mahi tells that Heer doesn’t value her, how would Virat respect her. She curses Soumya. Soumya replies that Mahi would learn her deeds after some time. Heer looks for Virat. Soumya stops Mahi from meeting Heer. She doesn’t want Heer to know their update. Mahi refuses to go with Soumya, who she doesn’t trust. Soumya takes Mahi away. Virat shows his possessive side to Heer, making her laugh. Heer likes his jealousy. He asks her to not make any new friend. She asks him to remember that they are strangers in the college. Virat wants her to obey him.