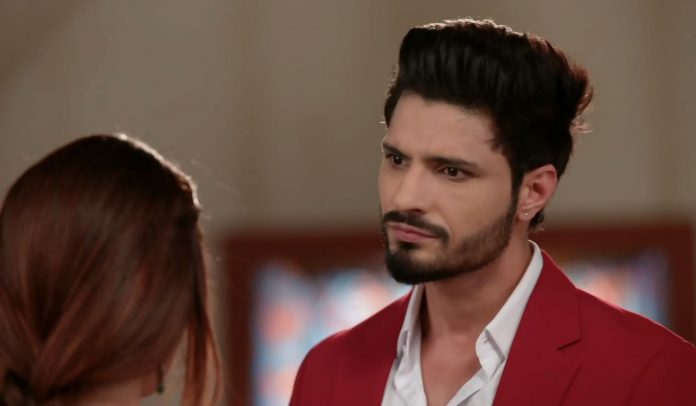 Kumkum Bhagya 6th July 2021 Written Update Purab entry Abhi thinks to take help from Pallavi and Vikram. He informs Pallavi about Tanu’s arrest. He wants Pallavi to help Tanu. Pallavi doesn’t want to help Abhi. She reminds how the past changed their terms. She doesn’t let him meet Vikram. She tags him a betrayer who disappointed Vikram. Pallavi punishes Abhi for Prachi’s deed to marry Ranbir. She tells that Prachi ruined her family, Aaliya ruined their business, but thankfully Vikram handled his company. She asks Abhi why did he spare Aaliya for the fraud. She warns Abhi to get away from Kohli family and never ask for favors.

Abhi faces enough insult by Pallavi. Abhi didn’t know that Pallavi is holding a grudge against him till now. He thought Pallavi will come ahead to help him by considering the old friendly terms. Pallavi accuses Abhi for bringing losses of crores for Vikram as well, by being so negligent when Aaliya was sinking the company for her greedy motives. Abhi regrets that he didn’t pay attention to Aaliya’s misdeeds that time, which resulted in Vikram’s loss as well. He doesn’t care if he has lost all the richness, after he lost Pragya, Rhea and Prachi. He regrets that he lost his best friend Vikram as well.

Purab returns in Abhi’s life to help him in tough times. Abhi rescues Tanu with the help of Tanu. Purab drops Abhi and Tanu home. He arrives in the chawl. He happens to come across Aaliya, who asks him to stop for her sake. He doesn’t have any relation left with Aaliya. He avoids Aaliya. She asks him to explain it to her, what’s the matter. He tells her that he has decided to get separated, he doesn’t want to live with her, even for the sake of Aryan. He doesn’t want Aaliya to further blackmail him.

Moreover, Abhi returns home to confront the family for hiding the big truth of Pragya’s return. He knows that Baljeet would never hide it from him, but Aaliya would have stopped her. He confronts Aaliya and Tanu for the lies. He asks them if they had met Pragya before itself, then what was the need to keep the truth to themselves. He asks if they thought that he will never get to know about Pragya’s survival. He tells that Pragya is the person whose purse was stolen, she had filed the FIR against Tanu.

He rebukes Tanu for not mentioning Pragya’s name when he met her in the police station. He reminds how she shouted to take help from him. Aaliya and Tanu get speechless. They hide the truth that they had tried to murder Pragya by using Abhi’s name. Abhi shares his sorrow on Pragya’s indifference. He tells them that Pragya hates him, and he doesn’t even know the reason.

Purab makes an entry in the police station with his lawyer to get Tanu bailed out. The lawyer gives the bail papers to the Inspector. Inspector asks Purab about his occupation, he would be famous that he arranged the bail so soon. Purab tells him that he isn’t famous, Abhi is a famous rockstar, who didn’t show his name and power to the police. He asks Inspector to talk to Abhi with respect. Inspector tells that Abhi looked like he belongs to a chawl. Purab sings Abhi’s praises.

She asks him the reason for his tension that he started drinking again. Abhi feels he ruined everything himself. Tanu asks Amit not to drink with Abhi. Amit tells that he is on duty, he isn’t drinking. She thanks Purab for bailing her out. She asks Purab to look at his friend’s state. Abhi is hurt thinking of Pragya. Purab asks the matter that made him tensed. Abhi tells Purab that he will make Tanu tensed by questioning her. He asks Purab to meet Baljeet. Purab agrees to meet Baljeet.

Tanu gets happy that she would be sitting in the car after a long time. She clicks selfies with Purab’s car. She wants to have some cool AC air and get detress. Purab takes them to the chawl. The family gets surprised to meet Purab. Purab gets to see Aaliya who argues with the chawl ladies while defending Tanu. She tells the ladies that Purab is her husband. She lectures the ladies, who taunt that Purab has abandoned her. Purab doesn’t defend Aaliya. He watches the cat fight. Tanu asks Aaliya not to argue with the ladies. Abhi makes arrangements for Purab to sit with the family.

Purab shows his humble side. He doesn’t like Abhi staying in the chawl. He wants Abhi to stay with him in his house. Abhi is grateful that Purab paid his losses and also saved him from the court cases. He doesn’t want any more favors. Purab asks Abhi not to feel alienated, they are brothers. Purab taunts Aaliya since she had made his life hell before. Aaliya knows that he still has bitterness for her. Purab asks Baljeet to come with him, then Abhi will follow. She refuses to leave Abhi alone.

Aaliya asks Purab why didn’t he invite her home, when she is his wife, she has first right on him. Abhi asks Purab to end the matter. Purab ignores Aaliya. He respects Abhi’s decision. He asks Abhi to take care of himself. Purab tells Aaliya that he is giving her respect because of their child, he doesn’t want to talk to her or live with her. He adds that she had always blamed Disha and suspected him, when he was always loyal and dutiful in his marriage. Aaliya yells at him. Purab leaves in a hurry. Abhi takes the family for a confrontation.

On the other hand, Ranbir tells Prachi that he will not spare Siddharth if he calls her so late for work. Siddharth asks Ranbir not to get devilish. Ranbir understands that Prachi works well, but she is in work pressure. He lectures Siddharth. He tells that he never called Prachi out of office hours for work. Siddharth teases him about his love story with Prachi. Ranbir asks him not to get mad. Siddharth tells that he likes to hear about their romance. He feels jealous seeing their height of love.

Ranbir asks Siddharth to become a good business, but he can’t become a good husband, when he won’t get a wife like Prachi. He praises Prachi and his pairing. Ranbir tells Prachi that Siddharth is waitng for his death to marry her. Prachi angrily slaps Ranbir. They apologize to each other. They have a moment and hug happily.

Reviewed Rating for Kumkum Bhagya 6th July 2021 Written Update Purab entry: 2/5 This rating is solely based on the opinion of the writer. You may post your own take on the show in the comment section below.