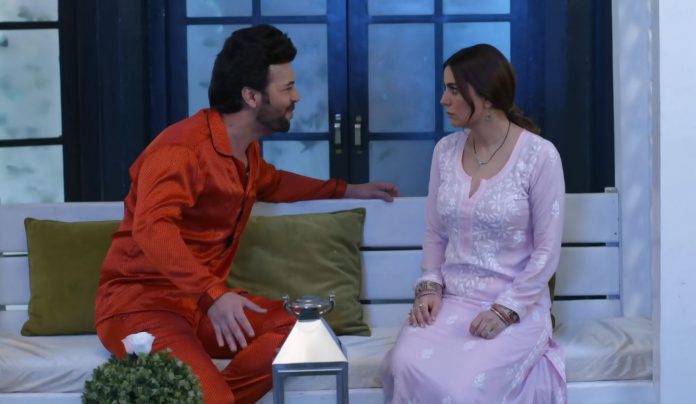 Kundali Bhagya 7th July 2021 Written Update Huge Confession Prithvi has changed the story so well when Preeta had tried to expose his affair with Sherlyn. He becomes a hero from a villain by proving that he was just helping a pregnant woman who was getting a panic attack. He changes his statements’ meanings in front of the family. He tells Rishabh that the door was jammed, whatever he told Sherlyn was just to distract her, he helped Sherlyn and her baby. He doesn’t think anyone should question him, which would mean that Rishabh and family doubt Sherlyn’s character. He requests them not to link his name with Sherlyn.

Preeta makes a favor on Preeta when she gets accused. He saves Preeta cleverly by defending her move to bug the necklace. She worries seeing Prithvi’s double faced personality. He wants the family to forgive Preeta. He gives the credit to Preeta to save Sherlyn and the baby’s lives. He thinks Preeta will remember this favor and turn soft-hearted towards him. The family gets thankful to Preeta for her sharp move. They are equally thankful to Prithvi for saving Sherlyn. Sherlyn has cleverly faked the panic attack in him to fail Preeta.

Prithvi and Sherlyn get saved with flying colours. Rishabh turns caring towards Sherlyn. He apologizes to her. She wins his faith. Sherlyn wants Preeta to apologize. Later, Prithvi meets Preeta. He tells her that the way Luthras were going to insult her and suspect her intentions, even Karan and Rishabh would have not been able to defend her, but the way he himself defended Preeta, the family had applauded her for the move.

He asks her to be thankful to him that he did Karan’s duty for her. He gets counting his favor on Preeta. Preeta silently listens to him until she blows off her anger. Prithvi tells her that he will always be with her. He further reveals to her about Sherlyn’s pretence, how they got to know about the camera fixed in the necklace and planned a panic attack drama to fool the family. Preeta is shocked to know that Prithvi and Sherlyn had learnt her plan beforehand. On the other hand, Mahira meets Sherlyn to praise her acting skills. She knows that Sherlyn had timely played the drama to get a panic attack, which saved her from the family’s wrath.

Sherlyn doesn’t reply Mahira seeing the family members around. She stays cautious. She doesn’t want to repeat her old mistake. Mahira tells that she is impressed with Sherlyn. Sherlyn gets away from her. Prithvi tells Preeta that she is present in the Luthra house today because of him. She asks him how did Sherlyn got to know that the necklace has a hidden camera in it. Prithvi boasts of his smartness.

He tells Preeta that there is nobody such who can outwit him. He asks her not to regard him a fool, he is really smart just like Sherlyn, who just did a drama to save themselves. Preeta gets alert and moved by his confession. What will Preeta do now to save Kritika’s life by stopping Kritika’s marriage with the fraud Prithvi? Will this confession be an eye-opener for Preeta? Comment your views below. Keep reading.

Sherlyn asks Rakhi to take her home, she doesn’t want to stay in the hospital. Rakhi takes good care of her Bahu. She assures Sherlyn that they will be going home in sometime. Prithvi makes fun of Preeta, who had failed so miserably this time. He tells her that noboby can catch him in smartness. He reveals that Sherlyn faked the attack just to gain sympathy from the family, after all the family believes that Sherlyn is carrying Rishabh’s baby, the family will do anything for the heir’s safety.

He explains Preeta how he got to know about the plan and brought the big twist in the drama. He tells that he doesn’t want to marry Kritika, who is mad for him. He adds that Kritika wants to marry him, he is marrying Kritika just to be close to Preeta. His talks makes Preeta feel disgusted. Sherlyn comes home with Rishabh and family. Mahira applauds her pretense. Sherlyn avoids Mahira to undo all the risk factors.

Kareena asks Sanjana to stay with them to look after Sherlyn. Sanjana doesn’t want any troubles because of Prithvi. She wants Sherlyn to spend time with Rishabh. She asks Rishabh to look after Sherlyn. She refuses to stay back. Rishabh starts taking care of Sherlyn’s diet and medicines, which pleases the family. Preeta gets angered on Prithvi’s dirty intentions. Kritika asks her if there is any problem. Prithvi tells Kritika that Preeta was just praising him for being understanding. Kritika wants to go for shopping. She asks Prithvi to take her for shopping. He charms her up.

They plan their shopping trip. Preeta wants to open Kritika’s eyes and plans to accompany them. Sherlyn asks Rishabh if he really suspected her to have an affair with Prithvi. Rishabh regrets that his mind was really off the track for some time. Moreover, Karan wants to know what is Preeta planning against Sherlyn. Preeta doesn’t want to involve him in house matters. She asks him to focus on his cricket practice and do his best. Sherlyn can’t take the insult from Preeta. She decides to teach Preeta a lesson of lifetime by getting her killed. She hires someone to instruct about killing Preeta. What will happen next? Keep reading.

Reviewed Rating for Kundali Bhagya 7th July 2021 Written Update Huge Confession: 5/5 This rating is solely based on the opinion of the writer. You may post your own take on the show in the comment section below.