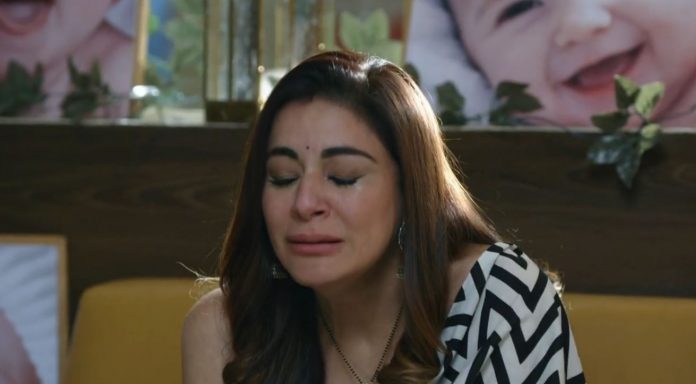 Kundali Bhagya 28th July 2021 Written Update Major twist Preeta is shocked by the doctor’s revelation that the pregnancy isn’t confirmed. Preeta isn’t pregnant. She tells that she has confirmed it by using the pregnancy test kit also. Doctor tells that the case is rare, but the test results are false. She asks Preeta to know that she had undergone all the tests. She wishes that Preeta’s confirmation was right, but the reports prove that she isn’t pregnant. Preeta gets disheartened.

She tells the doctor that even Daima had confirmed about the twin babies, Daima has told the family about her pregnancy. Doctor asks Preeta to believe in medical science when she is a doctor herself. She tells that Daima can’t declare that Preeta is carrying twins. Preeta doesn’t want to believe the truth. She tells that Daima has never been wrong in her diagnosis, how can she be wrong in this case. She wants to get the tests done again. Doctor tells that reports aren’t wrong, the pregnancy news is wrong.

She wants Preeta to understand. Preeta cries a lot knowing the family’s hopes will break down. Her heart, dreams and hopes break. Preeta checks the reports herself. Doctor reveals another shocking thing, which leaves Preeta shattered. Doctor tells that Preeta’s womb is weak, she will face fertility complications, she can never carry the baby after conceiving. Preeta can’t believe this major shock.

Doctor feels sorry to break her hopes. Preeta acts strong and leaves from there. She doesn’t know how to face the family and tell them the shocking news. Karan finds the family making arrangements for the trip. He asks Sherlyn about Preeta. She tells that Preeta was going to come with him. He tells that Preeta has left from the hospital when he called for her. He expects her home soon. Karan jokes on Kritika’s heavy luggage. She tells him that he will need to carry more stuff for Preeta. Sonakshi calls Karan.

She confirms that he is coming with his entire family. He tells that he has booked a luxury bus to arrive at the wedding. She compliments Preeta and his pairing. He wishes that Sonakshi and her groom’s pairing is also stunning. She adds that she is looking forward to see him, and the family, which seem to be her own family. Karan laughs at her madness. She asks him to come soon. Preeta returns home, only to see the family so happy for her. She cries in loneliness. Rakhi calls Preeta to the baby’s room. Preeta sees Rakhi’s expectations.

She gets emotionally tortured by keeping the news to herself. Rakhi tells Preeta that she is so happy to get Karan’s twins. Preeta cries and hugs Rakhi. Kareena asks them to come downstairs and prepare to leave. Kritika finds Rakhi and Preeta crying with joy. Kareena asks Rakhi to spend much time in the room after the babies come. Rakhi can’t stop sharing Karan’s childhood stories with Preeta. Preeta breaks down.

Meanwhile, Prithvi calls Sherlyn. She rages at him. She calls their relationship over. He tells her that he has done everything for her betterment, if anything happened to Preeta, then she would have suffered a lot. She tells that she is happy with Rishabh, she is married to Rishabh now, she is now happy with Luthras. She knows that he always talks sweetly and fools her in his words. She doesn’t want to believe him again and incur loss. She blames him for ruining her plan and also getting her slapped by Kritika. Preeta and Sameer happen to come there.

Sherlyn tells Prithvi that their relationship is over, since he got married to Kritika, their relation was just because of the baby, who is no more, everything is over between them now. She asks him to stop calling her and focus on his relationship with Kritika. She talks positive in favor of Kritika, which relieves Preeta. Preeta and Sameer overhear Sherlyn’s partial conversation. They believe that Sherlyn is really changing now. Sherlyn doesn’t care seeing them and walks away.

Sameer asks Preeta why does she look upset. Preeta pretends to be happy. Prithvi wonders how did Sherlyn end the relation in a moment. He can’t let the relationship break. He hopes that she comes back to him once her anger calms down. Preeta decides to tell the truth to the family. Karan finds her crying. He asks her the reason. Preeta hugs him. The family smiles seeing them share a hug. Sameer and Kritika tease Karan and Preeta.

Karan tells that Preeta was crying. Rakhi explains the mood swings that happen in pregnancy. Karan tells that Preeta didn’t wait for him and went to the hospital alone. He apologizes to her. Rakhi also apologizes and wants Preeta to be happy. Preeta asks them not to feel sorry. Karan tells that he will always stay with Preeta and never let her miss him. Will Preeta gain courage and tell them the saddening news that she isn’t pregnant. Is the false pregnancy news really true or someone’s conspiracy against Preeta? Is Sonakshi planning to marry Karan? What’s Sonakshi’s role in their lives? Comment your views on the shocking major twist. Keep reading for latest news and updates.

Reviewed Rating for Kumkum Bhagya 27th July 2021 Written Update Shock for Abhi: 2/5 This rating is solely based on the opinion of the writer. You may post your own take on the show in the comment section below.