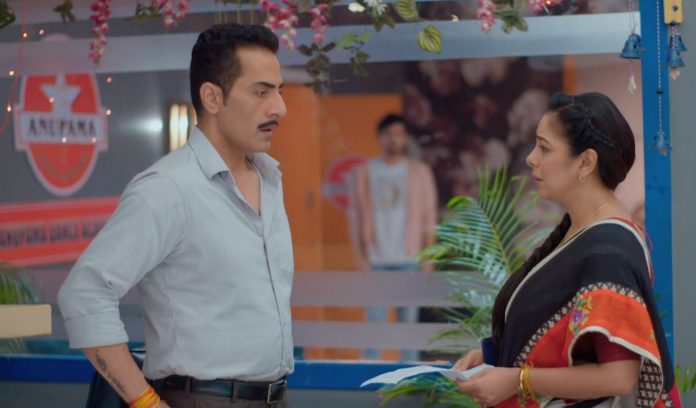 Anupama Vanraj New Crisis 30th July 2021 Upcoming Anupama helps Kavya on her request. Leela doesn’t want the food critic to write anything negative about their cafe. Kavya tells Vanraj that its a problem to serve Anupama’s special dishes. The lady orders the special dishes. Kavya knew it that Anupama will ruin the cafe one day. Anupama tells Kavya that she is going to make the dish and serve the lady on time. She doesn’t want Kavya and Vanraj to stay worried. Vanraj sings a song and spreads happiness. Anupama and Vanraj impress the critic.

They get glad to know that the critic will be passing a positive review about the cafe. The lady asks for a picture with the cafe owner. Vanraj falls into a fix. He wants to call Leela and Hasmukh for the picture. He requests Kavya to let them join in the picture. Kavya tells that they aren’t taking any family picture. She keeps the elders out of the picture. She poses with Vanraj, excluding everyone who made the cafe a success. Anupama and Leela expect that everything goes well for Vanraj’s cafe.

Kavya makes sure that she changes Vanraj’s mind against Anupama. Vanraj and Anupama get into an argument, while he feels his ego is getting hurt. Kavya wants him to throw the rent on Anupama’s face. Anupama makes sure that Kavya gets to learn a lesson. She knows Kavya is scheming against her, and shows what she can do in defence. Kavya knows that nothing is important to a man than his ego. Vanraj is hurt that Anupama got all the praise and didn’t even mention his name when she was giving her statement for the review.

Anupama was hoping to set an example of friendship by being good to Vanraj, but things stay the same. He still finds her self-obsessed and misunderstands her. Vanraj gets into big troubles because of his arrogance. He gets a pending property tax notice. He has no money to clear the tax. He wants to seek help from Anupama, but stops himself by recalling their argument. Anupama gets the tax notice herself. She is much worried about the huge amount. She extends her help to Vanraj. She enquires about the payment scheduled.

Vanraj worries that they need to clear the tax in a month time. She asks him to stay strong and not let anything shatter his dreams. Anupama and Vanraj share a moment of motivation, when they become each other’s strength Rakhi also offers financial help to Vanraj, but he refuses. Kavya worriedly asks him to accept Rakhi’s help. He decides to take a bank loan. Rakhi clears that nobody will be giving him a loan to pay the tax. She asks him to come back to ask her for money when he fails to get a loan. Vanraj feels discouraged by the life’s strike.

Reviewed Rating for Anupama Vanraj New Crisis 30th July 2021 Upcoming: 3/5 This rating is solely based on the opinion of the writer. You may post your own take on the show in the comment section below.