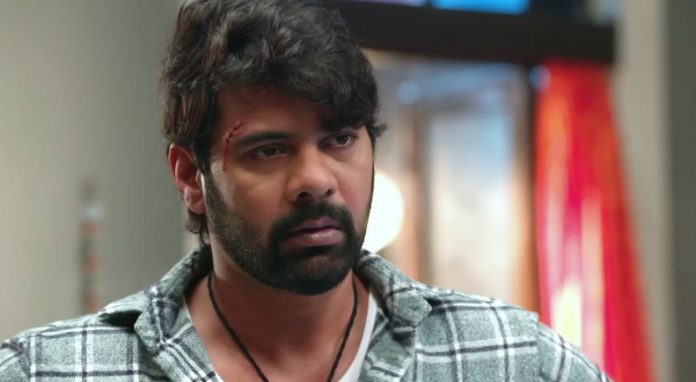 Kumkum Bhagya 29th July 2021 Written Update Abhi blamed Pragya alerts Sushma that Abhi can do anything because he has nothing to lose. Sushma knows that Abhi’s ego can’t defeat Pragya’s courage. Pragya tells her that she will not let Abhi win. She repeats Abhi’s words. Sushma gets reminded of their conversation. Pragya tells that love can still be Abhi’s weakness, but its not her weakness. She wants him to know that he doesn’t mean anything to her. She decides to prove it to him. Sushma knows that Pragya is falling weak, she is hurting Abhi while venting anger on herself also.

She wants to teach a lesson to Abhi to warn him for staying away from Pragya’s life. Abhi returns home with a wound. Baljeet worries for him. His state doesn’t ring an alarm for Tanu. Abhi learns that they have no medicine at home. Tanu gets into an argument with Abhi. He stays cool. Aaliya asks him to quit drinking. He tells that Tanu hurts him a lot by her arguments. Aaliya tells that his health is getting spoiled by alcohol. Baljeet asks Abhi to never drink. Abhi tells that he can’t stop drinking.

Tanu does the aid to Abhi’s wound. Abhi gets reminded of Pragya. Tanu smiles seeing him smile. She asks him about the earring. Abhi tells that it belongs to a lady. Tanu suspects him to be meeting Pragya. Sushma gets the call from the garage. She learns about the car accident. She realizes that Abhi is responsible for this. He tells her that Abhi is Sumit’s friend, he doesn’t work for him.

Sushma feels Abhi has done this to take revenge. She decides to break his courage by filing a FIR. Abhi lies to Tanu that he was really with someone special. He makes Tanu enraged. Tanu wants to know about the lady, if she isn’t Pragya. She asks Aaliya to support her. She unknowingly comments on Aaliya’s personal life and hurts her sentiments. Aaliya angrily leaves the house. Abhi tells Tanu that she did wrong to comment on Aaliya’s marriage. He stops Tanu from questioning him. He lets Tanu assume anything and go mad.

Tanu worries that he is cheating on her. Abhi clears to Tanu that he never needed her, she can leave the house and fix her broken fate. Tanu refuses to leave. She asks him if he is still meeting Pragya. He denies it. He tells that the lady he is meeting these days isn’t his old Pragya, she is someone who leaves him upset all the time. Aaliya informs that Sushma has arrived with the police to get him arrested. Abhi receives a shock.

On the other hand, Vikram survives the attack. He gets treated in time. Dida wants to give him the good news that Ranbir and Prachi will stay with them from now. Vikram wants to know it from Pallavi. He asks the family to call Prachi. Ranbir calls Prachi there. Pallavi lets Prachi meet Vikram. Vikram requests Prachi to return Ranbir to them. Prachi realizes that Pallavi was right to ask for Ranbir’s return. Pallavi had asked her to get separated from Ranbir for Vikram’s sake. Vikram doesn’t mean to separate Ranbir and Prachi.

Prachi misunderstands Vikram. Vikram tells that he wants his son back, he needs Ranbir with him, else he won’t be able to live. Pallavi asks Ranbir to just think of his dad at this moment. Prachi tells Vikram that Ranbir will always stay with him. She wants him to get well soon. Pallavi gets relieved that Prachi agreed, Ranbir will return to the family soon. Vikram clears the misunderstanding by stating that Ranbir and Prachi will stay with the family. Prachi gets too happy. She doesn’t feel compelled to listen to Pallavi.

Moreover, Sushma meets Abhi. She accuses him for the car accident. Abhi recalls the accident. Sushma asks him to pay a price for his mistake. The garage owner asks Abhi why did he go to deliver the car. Abhi tells that its Sushma’s mistake, Sushma has turned Pragya so short-tempered, he had stepped in between just to help Sumit. Sushma asks him why did he not deliver the car. Abhi tells that the accident happened by mistake, Pragya had enraged him. Aaliya and Tanu ask Abhi why did he go to meet Pragya. They show their hatred for Pragya. Sushma wants Abhi to pay the damage charges, else face an arrest. Abhi doesn’t have one lakh to pay Sushma. What will Abhi do now? Keep reading.

Reviewed Rating for Kumkum Bhagya 29th July 2021 Written Update Abhi blamed: 3/5 This rating is solely based on the opinion of the writer. You may post your own take on the show in the comment section below.