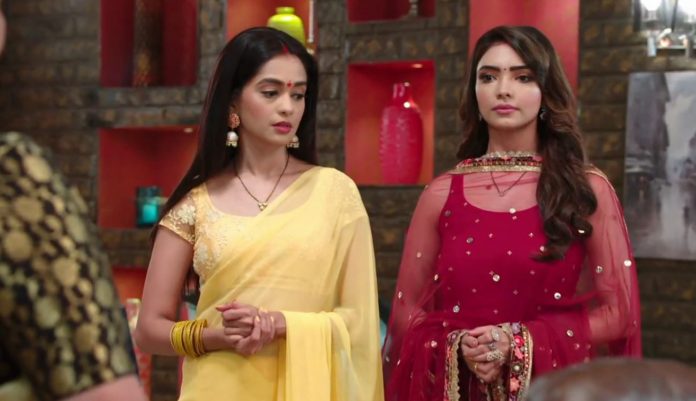 Kumkum Bhagya 3rd August 2021 Written Update Too Expected Pragya knows that she gets unsettled when Abhi is around, she melts down by his touch, she loses to him and becomes the old Pragya. Abhi tells her that she knows that she will surrender to him if he hugs her. He understands her, going through the same emotions like her. He tells that he will also melt down by her touch. He adds that they both can know each other by their touch, he can identify her in the crowd as well. He senses her feelings. She wants to fire him. He asks her to give a one-month notice and also compensate his loss. He tells that if she signs the papers to fire him, then she has to tolerate him for a month.

Meanwhile, Pallavi tells Ranbir and Prachi’s entire story to Teji. She regrets that Vikram wanted Ranbir back, and she had to accept Prachi as well. She hates Prachi. She finds tough to tolerate her. She tells that Ranbir has come back, but there is still a glitch. Dida announces that she wants to pass the responsibility to her grandson’s wife. She tells that Pallavi had been perfect in handling the house, its time to retire her and pass the responsibility to the next generation bahu.

She wishes that Prachi handles the responsibility well. Pallavi asks Rhea to go ahead and accept the responsibility from Dida. Dida clears to Pallavi that she wants to hand over the entire responsibility to Prachi. Rhea and Pallavi get disheartened. Pallavi doesn’t trust Prachi. She tells that Siddharth is elder to Ranbir, Rhea is elder to Prachi in relations, she has the first right on the responsibility. She wants Rhea to serve the family. Pragya asks Abhi how can he trick her. Abhi shows her the legal papers which she signed for his hiring. He tells her that she has much time, but she acts busy.

He reminds her the past. He asks her to give him one lakh and bear him for a month. She refuses to take his service. She asks the manager to fire him from work. Abhi asks the manager to explain Pragya the same thing in simple language. Pragya gets mad at Abhi. Dida tells that Ranbir got married before Siddharth, Prachi is their first Bahu. Pallavi and Teji call Dida wrong. Pallavi tells Dadi that they shall give a one week time to both Prachi and Rhea, and see who is more efficient in running the house responsibility well.

The family agrees with Pallavi’s suggestion. Dida tells that she will give the responsibility after taking a test. Ranbir enjoys family time after two years. He feels he missed them a lot. Prachi is happy that Ranbir got his family back.

Reviewed Rating for Kumkum Bhagya 3rd August 2021 Written Update Expected: 3/5 This rating is solely based on the opinion of the writer. You may post your own take on the show in the comment section below.