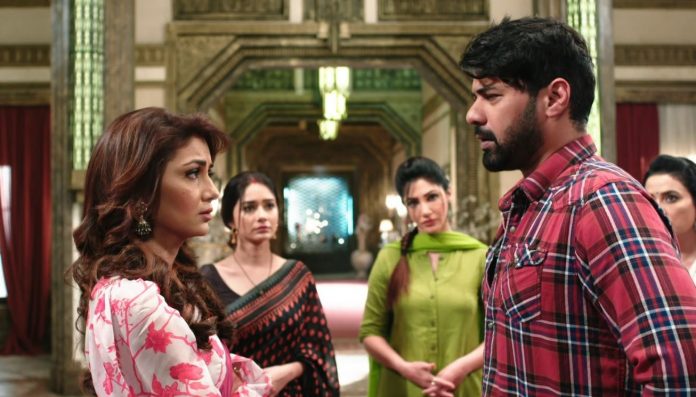 Kumkum Bhagya 31st August 2021 Written Update Abhi’s price Abhi gets regretful that Pragya means nothing to him now, just like the old times when Pragya didn’t mean anything at the time of marriage, but Pragya always respected the Kumkum. He feels sorry seeing Pragya not valuing her Kumkum and putting it on sale. He didn’t know that she will buy her Kumkum from Tanu. He is saddened and makes Pragya emotional reminding their old moments. He just wanted a life of peace with Pragya, which didn’t last long.

Their lives turned complicated because of the contract marriage. He wants to become Pragya’s happiness again, but doesn’t think his dream will turn true. He tells Pragya that she always took marriage as a vow of lifetime, but now she is the one who is making fun of it. He feels Pragya’s old thinking doesn’t matter now, their marriage will be just on papers. He blames Pragya for playing with his heart and emotions. He tells her that he is ready to sign the papers. Tanu asks them to sign the papers without any delay.

Abhi and Pragya sit to sign the papers, while Tanu watching them happily. Tanu just fulfills her greed. Pragya breaks down into tears by Abhi’s emotional words. They sign the contract. On the other hand, Rhea becomes Prachi’s enemy again. She overhears Pallavi and Prachi’s conversation.

Pallavi lets Prachi make the Janmashtami preparations. She tells that nothing should go wrong in the puja, Prachi can ask for her help if needed. Prachi asks her not to worry, she will do her best. Pallavi tells that she wants results, not her attempts. Rhea plans to fail Prachi in her attempts. Furthermore, Pragya pays the money to Tanu. Abhi gets offended seeing the money and tells that its his price. Tanu tells that she didn’t sell him forever, its not his price but just a rent of six months, he will have to return to her after six months. Pragya finds Abhi shattering. She keeps silence with a motive to save his life from sorrow. Keep reading for further updates.

Pragya is misunderstood by Abhi. Ranbir asks Prachi why did she run out of the room. She tells that she ran after Rhea. He asks if everything is okay. She adds that she got tensed for Rhea, who locked the door for a long time. He tells that its a normal thing. She tells that Rhea behaved strange, Rhea was feeling vomitish. He asks her why is she so happy. She tells him that Rhea called her a sister and hugged her with love. She feels she got her sister back. He tells that everybody is happy with their return.

He finds her happy. She tells that she is also very happy. They have a moment. Prachi tells Ranbir that Pallavi gave her special responsibility of the special festival. Ranbir tells that its a special festival for Dida, because Dida loves her Krishna, that’s him. He romances Prachi. Tanu asks Sushma not to get emotional. She asks them to proceed legally.

Sushma asks what’s the need for the contract when Abhi and Pragya are already married. Aaliya tells that Abhi and Pragya don’t want to keep the marriage, it will resolve after six months. Abhi tells that if they get real feelings in the fake relation, then the contract will show them the reality. Sushma asks him to behave like a good husband in front of the world. He tells Sushma that he will learn good acting from Pragya. He assures that he will be a good husband. He plans to do bad with Pragya.

Aaliya and Sushma worry seeing their fights. Sushma doesn’t want Gaurav to harm Pragya’s image. Abhi feels Pragya is still selfish. He thinks he is entering her life just to take revenge, she won’t even know what’s happening with her. Pragya thinks she has to let Abhi live with her because of Prachi’s wish. Prachi prepares for Janmashtami. Siddharth meets her. Ranbir asks Siddharth to crack jokes in front of him. Siddharth tells Ranbir that he likes Rhea a lot, he loves Rhea.

Rhea tells Ranbir that the pink dress is really suiting her. Ranbir tells that he was just teasing Siddharth. Rhea tells that he can tease her with all the right. Siddharth likes her spirit. She means something else, but acts sweet. Rhea asks everyone to keep smiling. Rhea sees Prachi’s Janmashtami preparations. She offers help. Prachi asks Rhea to rest. Pallavi makes it clear that she won’t tolerate any mistake from Prachi. Prachi assures that she will give Pallavi the desired results, and not let her down this time. Rhea vents her anger on Prachi by making her fall down the stool.

Ranbir catches Prachi in his arms. They get into a romantic moment. Siddharth clicks their perfect picture, leaving Rhea angered. Lawyer tells Abhi and Pragya that they are married now. Tanu demands her money. Sushma pays the money. Pragya feels sorry for Abhi. Abhi takes it on his heart. Tanu and Aaliya turn rich again, by selling Abhi. Stay tuned.

Reviewed Rating for Kumkum Bhagya 31st August 2021 Written Update Abhi’s price: 1/5 This rating is solely based on the opinion of the writer. You may post your own take on the show in the comment section below.