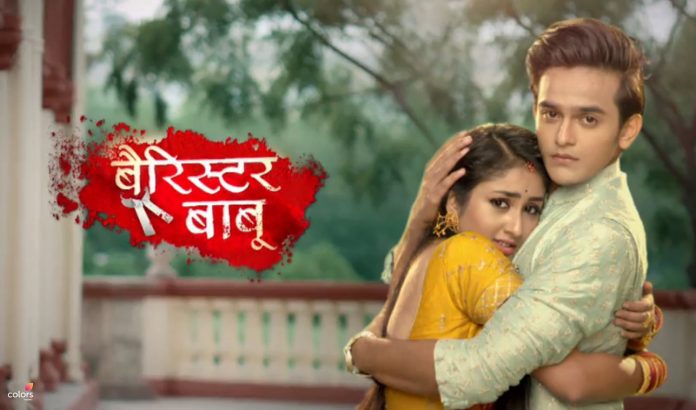 Barrister Babu 31st August 2021 Written Update Wedding bells Bondita and Anirudh get shelter at an old lady’s house, and get busy in the wedding preparations. A girl recognizes Bondita and tells her that she is being called inside by Thakumaa. Bondita and Anirudh get worried thinking Bondita’s Thakumaa has tracked them. Fortunately, Bondita meets someone else to her relief. Anirudh is asked to take the sacks outside.

Anirudh and Bondita get struck with the same idea, that they shall get married on the next day. Anirudh asks Bondita if they shall get married tomorrow. Bondita asks him the same thing, out of excitement. They both decide to get married. Bondita takes it as a sign that their fates will unite again. Anirudh tells her that she doesn’t need to get sad, that there will be no one from their families to attend their marriage, since he will try his best to make their marriage a memorable event of their lives.

He promises to make her his bride, by bringing an amazing baraat for her. He tells her that the sky will witness their marriage, while the stars will be the guests attending their marriage. He tells Bondita that they shall take the marriage vows and rounds under the sky, holding hands and making a vow to be together forever. Bondita gets too happy listening to him. Anirudh and Bondita plan their romantic marriage, far from their families’ knowledge. Will the couple get married or not? Keep reading.

Bondita feels bad for Anirudh seeing him lift the heavy sacks and get hurt, despite being a rich guy himself. She assists him in the work and also saves him from getting hurt. Anirudh can do anything for her love. Bondita and Anirudh learn about Thakumaa, but their fears subside when they meet someone else. A sweet old lady happens to meet Bondita. Anirudh feels happy that Bondita has found good company.

Bondita impresses the old lady Kali with her words. The old lady predicts her future. She tells that Bondita will live a really good life like a queen. She asks why did she become a maid. Sumati asks Chandrachur why didn’t he find Bondita. Thakumaa is angered that Bondita got the family insulted once again. Sumati wants to end her relation with Bondita forever. She thinks Bondita has broken her swear, Bondita can never be her daughter. She doesn’t want anyone to defend Bondita. Anirudh and Bondita stay busy in their work.

They hear the pandit’s words about the auspicious marriage. They both get happy planning their marriage, which will get blessed by the Gods and Goddesses. Anirudh tells that they will get married and convince their families to accept them. They hide under a table and have a moment. He tells her that she can talk to Sumati. Tupur worriedly takes the call. She doesn’t want the family to know that she made Bondita flee with Anirudh. Bondita asks Tupur to make her talk to Sumati, but Tupur lies to Sumati.

Bondita gives the good news to Tupur, that she is going to marry Anirudh. Bondita wants Sumati’s blessings. She wants to tell Sumati about her marriage. She asks Tupur to inform Sumati and wait for her return. Anirudh calls home to inform the family. He gets to speak to Binoy and Sampoorna. He informs that he is going to marry Bondita, he wants their blessings. Anirudh gets his blessings from his parents. Anirudh tells Bondita that they will have the marriage done by fulfilling the rituals. He plans a lovely marriage under the dark sky with shining stars. Bondita loves his sweet ideas. Will Trilochan learn about Anirudh’s marriage plans and create chaos? Keep reading.

Reviewed Rating for Barrister Babu 31st August 2021 Written Update Wedding bells: 3/5 This rating is solely based on the opinion of the writer. You may post your own take on the show in the comment section below.