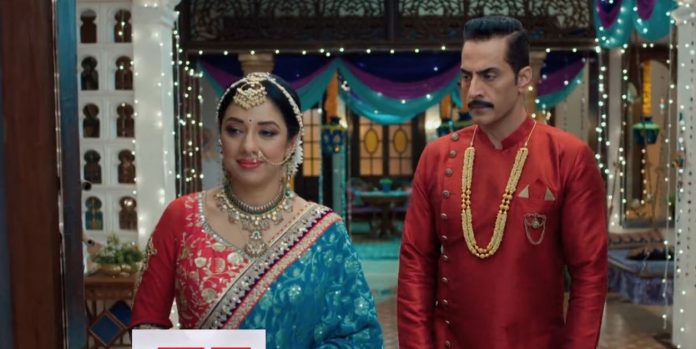 Anupama 8th September 2021 Written Update Insecure Vanraj Shah family welcomes Anuj and GK into their home. Vanraj tells Anuj that he saved Samar and bought all of them. He hugs Anuj emotionally. Anuj tells that Samar is okay, they can stop thanking and crying. He asks Anupama to calm down. Samar asks Anuj who won the bet. Anuj tells that its nothing much. Kavya asks Anuj to celebrate Janmashtami with them. Samar also requests Anuj. Samar tells that Anuj’s mummy has come along. Mama ji goes to welcome the lady, and instead sees GK.

Anuj introduces GK as his mum and every relation. GK meets Anupama. Anuj tells GK that Anupama is his college friend. He introduces Anupama’s family. Hasmukh takes them inside the house. They see Anupama’s traditions. Anuj compliments them for the lovely house. Vanraj finds Anuj and Samar bonding. Anuj tells that he didn’t know they are so rich in terms of relationships. He tells them that he respects family. Leela asks him to come to the point directly. Kavya tells that Anuj is a business tycoon, he is just doing poetry.

Kavya, Kinjal and Paritosh sing praise of Anuj. Gopi adds up by boasting about Anuj. He tells that Anuj is his Raja beta. Anuj stops him from doing it too much. Gopi tells that he gets emotional about Anuj, since he raised Anuj after his parents’ death. Kavya wants to utlize the situation in their favor. She tells that Anupama should treat Anuj well and set their lives. Anupama is thankful that Anuj saved Samar. Kavya doesn’t feel any shame to ask help. She thinks Anupama is foolish. She decides to befriend Anuj.

Anuj leaves an impression on the entire family. Pakhi tells that Anupama teaches at her school. Anupama tells that she takes the cooking classes. The family praise Anupama’s cooking skills. Kavya tells that they have come home coincidentally. GK tells that it was Kanha’s plan, they were going to the temple to perform puja. Hasmukh stops them for the puja at home. Anuj doesn’t want Anupama to face any awkward situation. GK tells them that its Anuj’s birthday today. Anuj feels shy. Vanraj and the family wish him happy birthday.

Reviewed Rating for Anupama 8th September 2021 Written Update Insecure Vanraj: 5/5 This rating is solely based on the opinion of the writer. You may post your own take on the show in the comment section below.