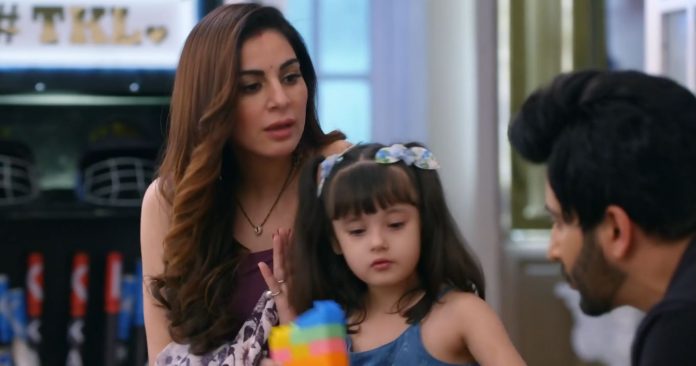 Kundali Bhagya 15th September 2021 Written Update Rishabh arrival Karan and Preeta take care of Pihu and spend time with her. Preeta doesn’t want Sonakshi’s presence to affect their mental peace. Preeta is happy that Sonakshi isn’t claiming Pihu now. She wants to show Sonakshi that Pihu will get a complete family, financial security, emotional security, many loving relations along with parents’ love if she stays as a part of the Luthra family. She wants Sonakshi to understand that Sonakshi can just give a single relation of a mother to Pihu, while Karan’s love will be lacking in Pihu’s life.

She is hopeful that Sonakshi will not interfere in their lives and go away from them once she is also assured that Pihu will be more happy with them. Karan believes Preeta’s decision, though he is against Sonakshi’s stay in the house. Karan tells Pihu about Rishabh, who is his elder brother. He praises Rishabh, that he is the perfect example of a brother. Pihu asks Karan why does she not have any elder brother.

Karan and Preeta get speechless by her cute questions. They enjoy the quality time. They look ahead to welcome Rishabh back. Sherlyn informs Prithvi that Rishabh is returning home. Prithvi tells that Rishabh’s coming will be troubling him, Rishabh will not let him overtake the companies and properties if he comes back.

He adds that he will have to hurry up and get entire properties and businesses transferred to his name before Rishabh arrives. Sonakshi also showers her love on Pihu. She wants Pihu to love her. She tells the nurse that Pihu is her daughter. She wants to get love from her daughter. She wishes to spend time with Pihu. Sonakshi gets more inclined towards Pihu. Will Sonakshi pose a problem for Preeta? The coming track will see Rishabh’s return, along with Sherlyn’s new conspiracies. Sonakshi’s agenda isn’t clear till now. What do you think about Sonakshi’s real motives to stay in the house? Comment your views. Keep reading.

Karan informs Preeta that Rishabh is coming. Preeta likes the news. Karan tells Pihu that she doesn’t have a brother, because babies trouble them a lot. Pihu tells them that if they give her a baby, then she will take care of the baby. Karan tells her that he will give her a brother when Preeta gives his time. Pihu asks Preeta to love Karan, instead scolding him. Sherlyn gets scared seeing Prithvi uninvited in her room. He tells her that he has come to meet her secretly. She tells him about Sonakshi.

He replies that Sonakshi is injured. She tells that Sonakshi is playing a big game with the Luthras, she isn’t injured but acting. He tells that she is just helpless because of the situation. She receives Rishabh’s message. She learns that he is coming back. Prithvi tells that he won’t waste any time and take over the Luthras’ business. Sherlyn isn’t happy with the news of Rishabh’s return. Preeta scolds Karan. Karan gets Pihu on his side. She asks Preeta to say sorry to Karan.

Karan is happy that Preeta is saying sorry so easily. Pihu asks them to be friendly. Karan hugs Preeta on Pihu’s saying. Rakhi meets them and finds them happy. Pihu asks Preeta not to fight with anyone. Rakhi laughs. She makes a shopping plan with Preeta. Preeta informs Pihu about Ganpati event. Karan wants the event to be grand with Pihu. Rakhi accepts his request. Pihu wants a new dress. Preeta tells that she will get many dresses for her. Sameer also joins them to play with Pihu. Sonakshi hears Pihu’s voice. She realizes that Pihu is playing with the family. She wants to go and see her once. She tells the nurse that she had time to go close to Pihu and get her love, but she is away from her daughter.

She tells that she is Preeta’s friend, but regards her a sister. Pihu cares for her injury. Karan asks Pihu to come with him. Sonakshi thanks him. Karan asks her to thank Preeta. Sonakshi tells Preeta that Pihu just left. She asks Preeta not to feel guilty. Nurse tells that Sonakshi needs complete bed rest and shall recover in few days. Sherlyn keeps an eye on Sonakshi. Rakhi gives Sonakshi’s responsibility to Sherlyn. Sherlyn thinks Sonakshi is acting. Prithvi finds her tensed. She tells that Sonakshi is really cunning, she is making Preeta take care of her by her sharp planning.

She bets that Sonakshi won’t go to London, she will stick in the family for long. Prithvi tells that Sonakshi is a simple girl, she can never become Karan’s wife, Karan is madly in love with Preeta, Preeta rules on everyone’s heart, the family will never accept Sonakshi, they are just helping Sonakshi, they will oust her once she gets fine. Sherlyn asks him not to underestimate Sonakshi. He asks her not to assume the world as Karan and Preeta’s enemy. She tell that she is sharp-minded and can see Sonakshi’s plans. Prithvi asks her to bet on Sonakshi’s intentions. Sherlyn is so sure of her intuition that Sonakshi is a wrong person.

Reviewed Rating for Kundali Bhagya 15th September 2021 Written Update Rishabh arrival: 5/5 This rating is solely based on the opinion of the writer. You may post your own take on the show in the comment section below.