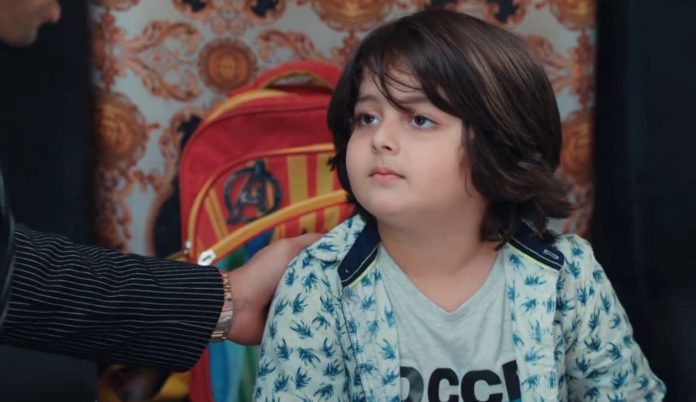 Yeh Hai Chahatein 7th October 2021 Written Update Saaransh missing Prisha goes to Khurana mansion terrace. She feels happy seeing the decoration made by Rudra for their date. She calls Rudra, he comes in front of her. Prisha makes Rudra happy by running into his arms. She praises the decoration made by Rudra and also his looks. She asks him why he asked her to dress so simple. He shocks her by showing her the clothes he bought for her. On the other side, Armaan and Sanya get happy seeing Anvi crying and their plan getting successful.

Armaan tells Sanya that Rudra has planned a date for Prisha. He tells her that according to his plan Prisha will not attend the date. Sanya tells Armaan that earlier he was so classy and a husband material, but now he is behaving like evil, stupid and unclassy man in love. He blames Sanya for him becoming like this. He tells her he would not have to perform such cheap tricks if she would have married Rudra earlier.

Armaan says everything is fair in love and war. He adds that he loves Prisha and can have war (fight) with Rudra for Prisha. Sanya says she understands that he is using her Anvi to get Prisha. Armaan tells her she can leave. Sanya says that police have restricted her from leaving the city. Armaan asks Sanya to stay and help him in his plans. He asks her to bring an onion to execute their plan.

At Khurana house, Rudra asks Prisha to wear his brought dresses. They get naughty and romantic. Prisha feels shy and calls him a goon. He sends her to change. Prisha changes into a police officer’s uniform. Rusha gets romantic and dances with each other on the song “Mere Rang Mein Rangne Waali”. At Armaan’s house, Armaan tries manipulating Anvi against Prisha. While he asks Anvi to stop crying, Sanya keeps an onion under Anvi’s pillow.

Sanya and Armaan make Anvi believe that she has got a fever. At Khurana house, Prisha next dresses up in white Saree. Rudra and Prsiha get more romantic. Armaan, on the other hand, puts the thermometer in hot water to increase its temperature. Then he goes to check Anvi’s temperature and make her believe that she is down with a high fever. He asks Anvi to forget Prisha as she doesn’t love her anymore. Sanya puts fuel in the fire and says that Prisha doesn’t love Anvi because she got her real son Saaransh back.

Sanya promises that she and Armaan will love her a lot. They make her lay on her bed. Prisha on her date changes next into a purple Saree and gets more romantic with Rudra. Armaan and Sanya tell Anvi that her fever is increasing. They blame Prisha for Anvi’s condition. They get scared when Anvi tells them that she is getting the onion’s smell. Armaan and Sanya scares Anvi by telling her that they may have to admit Anvi to the hospital. Next Prisha is seen dancing with Rudra on old hindi songs wearing a white suit.

Prisha feels a little uncomfortable seeing the last dress brought by Rudra. Rudra asks her to not wear it if she is uncomfortable with it. Prisha picks up the dress. Armaan and Sanya on the other side scares Anvi a lot by saying that the doctor will give her the injection. Sacred Anvi refuses to go to the hospital. She asks for Prisha. Armaan tells her that Prisha can’t come. Sanya says she is calling Prisha.

On the other side Prisha comes wearing Rudra’s favorite dress but covering herself with a white sheet. Both Rudra and Prisha get in a full romantic mood. Rudra praises Prisha’s beauty. He says he waited a lot to be with her. They get interrupted when Sharda loudly calls them. She tells them that Sanya called and came to inform them that Anvi got down with high fever. They get tense and Prisha leaves to change. Rudra asks Sharda if Anvi’s fever could be a part of Armaan’s plan? Sharda says Sanya looked tense, maybe it is not Armaan’s plan.

Prisha blames herself for Anvi’s condition. Rudra tries to lower Prisha’s plan. Sanya fakes concern for Anvi in front of Khurana’s. Rudra goes with Prisha to confirm if it is one of Armaan’s plans. Armaan throws the onion away to not let Prisha know the truth. Prisha reaches Anvi and assures her that she will not let anything happen to her. Rudra and Prisha get shocked on knowing that Anvi has 103.4 fever. Rudra feels Armaan really looks concerned and it may not be his plan. Prisha asks Armaan why he didn’t call her earlier. He says he didn’t want to trouble her but failed to handle Anvi.

Prisha and Rudra take care of Anvi. Prisha asks Armaan to rest as she will take care of anvi. Rudra informs Sharda that Anvi is really down with a high fever. Sharda asks Rudra to stay with Prisha. Rudra asks Sharda to take care of Saaransh. Armaan overhears Rudra and Sharda’s conversation and feels happy thinking that Rudra fell in his plan. He then secretly enters Khurana mansion and kidnaps Saaransh. While leaving, Armaan by mistake hits a vase making a noise. Sharda wakes up and wonders what happened seeing the fallen vase and the main door opened.

In the next episode, Sharada will go to Saaransh’s room. She will be shocked to find Saaransh missing. She will call Rudra to inform him about the same. Prisha and Rudraksh will get tensed. Sanya will try to stop Rudra and Prisha from going to Armaan to inform him about them leaving to find Saaransh. On the other side, Armaan will be seen running with Saaransh. Rudra and Prisha will knock on Armaan’s room, while Sanya will try to alert Armaan.

Reviewed Rating for Yeh Hai Chahatein 7th October 2021 Written Update Saaransh missing: 2/5 This rating is solely based on the opinion of the writer. You may post your own take on the show in the comment section below.