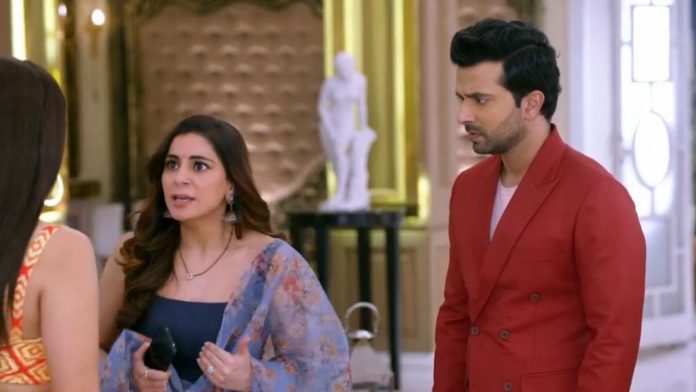 Kundali Bhagya 7th October 2021 Written Update Preeta breaks down Preeta tells Rishabh that she has an evidence against Sherlyn and Prithvi. She adds that she has a recording where he can see them romancing. She goes to play the video on the screen. Rishabh asks Sherlyn to confess if she has an affair with Prithvi. He tells that if he gets the proof of her lie, then he will break their relations, if she can’t keep the relations, then she can better leave than making their relations dirty. Sherlyn denies the allegation. Rishabh asks her to pray that the proof is in her favor, else he will not spare Prithvi and her.

On the other hand, Karan handles an event in Rishabh’s absence. He calls Rishabh to take his help. Rishabh goes away to call Karan. Preeta runs to her room to get her phone. She wants Prithvi and Sherlyn to get exposed. She rushes to Rishabh to show the truth. Karan asks Rishabh to come and attend the event. Rishabh tells that he is stuck in a worse matter, he has much work, he can’t talk to him right now. Karan asks him if he is worried for something. Rishabh tells that he has to settle some scores. Karan finds something wrong. Preeta tells Rishabh that she had recorded Sherlyn and Prithvi’s love confession.

Preeta tells Rishabh that she caught them at night, she wanted to tell the family, but they both pleaded her and promised in front of Bappa that they will not do any wrong with the family, they promised to break their relation, she thought to give them a chance, but they are disgusting to break their promise in a day. She tells that either Prithvi or Sherlyn had deleted the video. Prithvi claps for Preeta’s story. He asks her why is she doing this, if she has any problem with Sherlyn and him. He accuses her for blaming them and ruining four lives altogether. Preeta tells that evidence can disappear, but truth remains the same.

She explains Rishabh that she didn’t wish to break anyone’s relations, they are lying to him. Sherlyn asks Preeta to talk to her, if she is staining her character. She accuses Preeta for her hatred, for her motives of breaking Rishabh and her marriage. Preeta isn’t interested in talking to the disgusting duo. Prithvi asks Preeta to stop it, its too much of insult. Rishabh asks them to stop the arguments, he doesn’t want to hear anything. He gets disturbed by Preeta’s shocking disclosure. He lashes out at Preeta. Preeta breaks down into tears.

He warns Sherlyn to stay away from him. Prithvi goes to meet Preeta. He angers her further. He tells that he is God gifted, he cleanly lies, he doesn’t let his truth come out. He admits that he has deleted the video from her phone. She had made a mistake to leave her phone in the room, he had seen her hiding it inside the cushion and knew that something is wrong. Preeta threatens him that his game will end soon, the truth will come out and his sin pot will break. She promises to end his game. Prithvi makes an innocent face. He asks her to let Sherlyn and his affair go on. She asks him to leave.

He tells that her life will be ruined if she comes in his way, if he does his wishful. She asks him not to threaten her. She decides to expose his truth to the family. He decides to break her confidence. He warns her against angering him. She isn’t scared of his threatening. She tells him that she will not spare him. He asks her if she succeeded in exposing him, if Rishabh believed her. She tells that she will soon gather the proof and show it to the family. He goes to his room. Sherlyn secretly meets him. They share a hug.

She is glad that he saved her once again. She tells that she felt everything is over today. He tells that he had to save her, she is his love, they can never get exposed. He tells that he will do anything for their victory. He explains her that they can’t meet for few days, nobody shall doubt on them. She turns upset, but agrees to him. He asks her to win Rishabh’s heart and confidence. He tells that she should plan against Preeta, Rishabh will lose faith on Preeta, then Preeta can’t expose their truth.

Sherlyn tells that its too easy for her to win Rishabh’s love, because he wants to move on in his life. He tells that he doesn’t want Rishabh to love her. They confess love to each other again. She tells that she will poison Rishabh’s heart against Preeta. She meets Rishabh and thanks him for trusting her. She asks him if he suspects her character. She wins him by her sweet words. She reminds him what he told her the last night. She tells him that she wants to move on with him. She asks him to break his silence. He tells that he trusts her. He adds that he just believes his instincts, rather than someone’s words. Sherlyn gets relieved that he didn’t come in Preeta’s words.

Rishabh isn’t able to forget whatever Preeta told him. He knows that Sherlyn asked him to trust her, this is the difference between Sherlyn and Preeta, Preeta has earned his trust. He trusts Preeta. He knows that Preeta has seen something wrong, else she would have never raised her voice against Sherlyn. He wants to keep an eye on Sherlyn and find the truth himself. Thankfully, Rishabh doesn’t regard Preeta wrong.

Reviewed Rating for Kundali Bhagya 7th October 2021 Written Update Preeta breaks down: 2/5 This rating is solely based on the opinion of the writer. You may post your own take on the show in the comment section below.