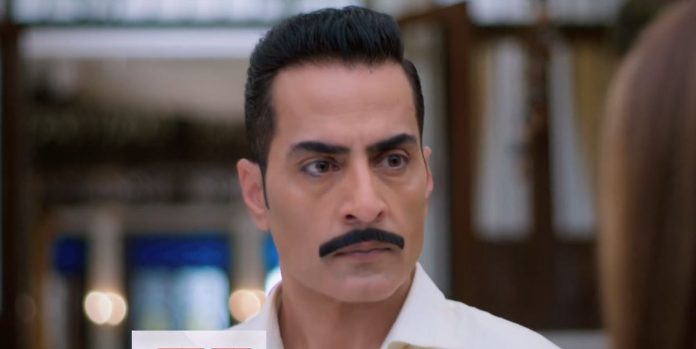 Anupama 8th October 2021 Written Update Reality check for Vanraj. Anuj is delighted to know Anupama’s thoughts on her family. She doesn’t feel her family is a cage for her to get freed from them, but a nest where she wants to live. She doesn’t want to move ahead by leaving her family behind, after all she is progressing in her life for the sake of her family. He apologizes to her for his wrong advice, that he asked her to leave her family. He wants her to forget everything and do what makes her happy. She is grateful to him for becoming such a good friend. She feels her fate is really good to get good friends like Devika and him. Anuj feels he has reached a phase where he can’t live without Anupama. He enjoys working with Anupama. Kavya gives a reality check to Vanraj.

She asks Vanraj to get over Anuj and Anupama for his own sake. She exclaims that he can never progress if he is just after them. She asks him to better keep Anuj and Anupama’s names in the cafe menu. She taunts him over his bitterness and jealousy. Vanraj gets to realize the truth, but doesn’t care. The family witnesses Vanraj and Kavya’s argument. Vanraj’s ego forms back. Leela accuses Anupama for making the family relations bad. She asks Anupama to change her decision, her friendship with Anuj is breaking her relations with everyone in the house. She misjudges Anupama once again.

Anupama meets Vanraj to find out the reason for his fear of losing her, when she doesn’t belong to him. She tells him that he never valued her, and now he is claiming his rights on her when she isn’t his wife anymore. She confronts Vanraj for his objection to her friendship with Anuj. She explains him the mistake he is doing, instead respecting her for being the mother of his children. She advises him not to question her, because he has lost his rights. She doesn’t think he should care, he can’t decide for her. She tells that his family belongs to her as well.

Vanraj is questioned by her. She remarks his mistake of punishing her. She doesn’t want to pay a price for being his wife after the divorce. She requests him to give peace in her life. She is also a person who deserves to live. She asks him to stop the family from breaking. Vanraj seems to understand everything she said, but it happens to be his imagination. His heart becomes kiddish to expect a moment with Anupama. He finds Anupama and goes to speak to her, but finds her already speaking to Anuj. Vanraj gets too upset, while Anuj is happy with the fact that Anupama is in his life.

Sitting in Anuj’s cabin, Anupama completes her work. She asks him what else she has to do. Anuj asks her if she will complete the work today itself. Anupama leaves the work and says bye to him. Before she could leave, Anuj falls back on his chair. Seeing Anuj with his head in his hands, Anupama asks him if he is fine or not. Anuj explains to Anupama that he just felt dizzy because of not sleeping the previous night. She asks him why he didn’t sleep the previous night. Anuj says he couldn’t sleep due to migraine. Anupama says migraine continues till 3-4 days. She asks Anuj, did he take medicines. Anuj replies he can’t have medicines because he hasn’t eaten anything.

Anupama gets shocked on knowing that Anuj hasn’t eaten anything since morning. She scolds Anuj saying he is not a kid, nobody will run behind him with food and medicines. Anupama further scolds him saying, he should have eaten something and taken medicines if he knew he felt unwell. Anuj asks her, why is she scolding him for being hungry. Anupama again scolds him saying he did the work of getting scolded. Anuj tries standing, but Anupama asks him to be seated. She goes outside and Anuj wonders where Anupana went. Anupama returns with Anuj’s chocolate milk and asks him to drink it completely in the count of 10. Anuj drinks the milk in 8 seconds. Anupama laughs seeing Anuj’s milk moustache. He cleans it.

Anupama apologizes to Anupama for scolding him. Anuj confuses Anupama with his shayari. Anupama tells Anuj that she is sending food for him and asks him to have it. She leaves and Anuj stares at her leaving. Anuj thinks why he feels like stopping Anupama with him. Anupama reaches Vanraj’s cafe. She tries explaining to Vanraj to not feel angry. She advises him that they should not fight with each other and do their own work. Anupama further asks Vanraj, why is he feeling scared of losing her, when she is not his anymore. She asks him why he is showing his rights to her now, when he didn’t care about her even when she was his wife.

Anupama further says to Vanraj that he had an affair with Kavya when they were married. But now, when she (Anupama) is not his wife, why can’t she even keep a friendship with Anuj. Anupama asks him what is this obstinacy of his that she (Anupama) is his even when he doesn’t consider her his (Vanraj). But she (Anupama) can’t keep a friendship with anyone even after he (Vanraj) has become someone else’s (Kavya). She also tells him that they can’t interfere in each other’s lives even after they live under the same roof for their family. She asks him, did she ever question him.

Anupama says to Vanraj that he committed a mistake, then why is she getting punished. She asks till when she will get punished? She asks till when she will have to pay for being his ex-wife. She further asks him can’t he let her live in peace even when she didn’t ask any alimony from him. Anupama tells Vanraj that they can stop their family from breaking into two parts. All this turns out to be Vanraj’s imagination. He sees Anupama in her dancy academy and goes to her. He stops in between hearing Anupama and Anuj’s conversation about an upcoming meeting. At Anuj’s house, GK asks Anuj what has happened? Anuj says he is missing Anupama. GK tells him to call Anupama using some excuse. Anuj refuses saying he can’t increase Anupama’s trouble by breaking Anupama’s trust in him.

Nandini tries to explain Baa, but the latter shuts her down. Baa asks Anupama to not ruin relations in other’s house. She calls Anupama Shameless. Baa also humilates Anupama and Anuj’s friendship. Baa, Kinjal, Anupama and Nandini witness Vanraj and Kavya’s fight from Kitchen. Kavya scolds Vanraj for not concentrating on his cafe work and getting busy thinking about Anuj and Anupama. She further compares Anupama with chaas, Anuj with strong and rich coffee and Vanraj with burned tea. Kavya fights with Vanraj for not letting her work with Anuj Kapadia. Baa advises Anupama to break her friendship with Anuj as it is breaking other relations in the Shah house.

Kinjal tries to lighten Anupama’s mood. Anupama says she just felt bad but can’t change Baa’s orthodox thinking. Vanraj and Kavya’s fight continues. Both of them insult each other. Vanraj asks Kavya to not come to the cafe with him if she doesn’t feel like. He warns her to not dare insult him in front of his family. Baa again blames Anuj and Anupama’s friendship for all the fights in Shah house. She prays to god to end Anuj and Anupama’s friendship. Nandini helps Anupama to make her email id on Anuj’s company’s website for work. Anuj receives Anupama’s first email and gets happy.

Anuj receives a call from someone. After ending the call he thinks he has to call Anupama now. GK says to Anuj that Lord Krihna gave him this chance to talk to Anupama. Anupama receives Anuj’s call and says tomorrow. Next morning, Vanraj sees Anupama with luggage and asks her where she is going. She does not but Samar is going to Delhi for work. Vanraj snatches Anupama’s phone and scolds Samar for not informing him about his corporate award function. Baa tells Vanraj that Anuj Kapadia is sending Samar to Delhi.

In the next episode, Vanraj will wonder where Kavya went. He will think Kavya may have gone to get a job from Anuj. Kavya will shock Anuj and Anupama saying she came to discuss Anuj’s job offer. Anuj will discuss it with Anupama and will tell him that he doesn’t want her to get uncomfortable.

Reviewed Rating for Anupama 8th October 2021 Written Update Reality check: 5/5 This rating is solely based on the opinion of the writer. You may post your own take on the show in the comment section below.