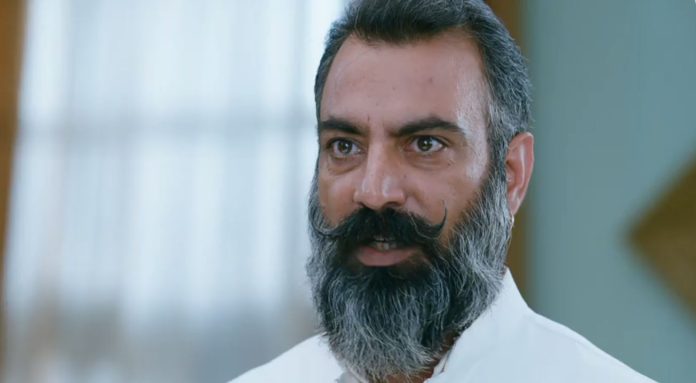 Udaariyaan 8th October 2021 Written Update Khushbeer in danger Tejo shocks Jasmin by showing her the two passports. She tells Jasmin that she knows it well that Jasmin has burnt Rupy’s passport instead her own just to fool Fateh and prove her love to him. She laughs on Jasmin’s dirty tactics to get her love. She asks her if she can play more such games to always keep Fateh with her. Jasmin and Tejo hold each other’s secrets. Tejo asks her to not tell anyone about Candy at home.

She tells that she will expose Jasmin’s truth to Fateh if she dares tell anyone about Simran and Candy’s relation. Jasmin gets helpless to obey Tejo, because she can’t lose Fateh. Tejo and Jasmin settle on a mutual deal to keep their secrets. Tejo knows that Fateh will some how learn Jasmin’s truth soon, she doesn’t need to tell him anything. She also realizes that Candy’s truth will come out some day, until then she has to make Candy win the family’s hearts. Jasmin realizes that Tejo has earned a good place in the house just because of Khushbeer. She wants to weaken Tejo and Khushbeer’s bond.

Tejo tells Khushbeer that she will get the tea for him. Jasmin adds some powder in the tea to harm Khushbeer. She wants Tejo to get blamed. She wants to weaken their relation and break it. She knows that everyone will hate Tejo if anything happens to Khushbeer. She tells Tejo that she got the tea from the kitchen. Khushbeer asks Tejo to get it. Tejo takes the tea cup from Jasmin’s hand to serve it to Khushbeer. Jasmin wants him to drink the tea and fall ill. What will happen to Khushbeer? Will Jasmin stoop to this level to harm someone’s life? Keep reading.

Tejo shocks Jasmin and acts just the same way as Jasmin was mocking her. She tells Jasmin that if she tells anyone about Simran and Candy, then she will tell the entire truth to Fateh, then Jasmin will be out of Fateh’s heart and life. Jasmin tells that Fateh will never believe Tejo, since he loves her a lot. Tejo asks her to keep the misunderstanding if she wants. She knows Fateh well. She tells that she can’t imagine Fateh’s reaction on knowing the truth.

Tejo tells that Fateh will not love her, after knowing her lies. She tells that her lie is just to unite a mother and a daughter, its better than any number of lies, she is lying for someone’s happiness, not to ruin someone’s life. Jasmin returns home with an upset mood. She complains to Fateh about Tejo. She tells that she has decided to move on after hearing so many taunts. She brainwashes him against Tejo. Fateh asks her if Tejo told this, Tejo can’t do this. Jasmin asks him if she is wrong. She tells him that she doesn’t want him to talk to Tejo, but she just informed him to be true to him. She asks him not to trust Tejo if she tells anything. She lies that she wants their relation to have transparency.

He can’t believe her words against Tejo. Tejo and Jasmin find the family with Candy. Tejo threatens her, stating she still has Rupy’s passport with her. She informs Simran that Jasmin is under control, there won’t be any problem. Jasmin goes close to hear Tejo and Simran’s talks. Tejo tells Simran that Jasmin is interested in her talks. Jasmin finds Tejo busy with Candy. She goes to Tejo’ room to search for the passport. She finds a locker there. She wants to unlock the locker. Tejo tells the family that she needs to go to college.

Tejo asks the family to look after Candy. Jasmin runs to get the locker keys from Tejo. Tejo leaves for the college. Jasmin asks Fateh to go to Tejo and get the locker keys, she needs some important documents. Fateh believes Jasmin’s story. He stops Tejo to get the academy papers. He gets the locker keys from Tejo. He asks her to go to the college without getting late. Jasmin asks Fateh to see their room’s broken tap. Fateh gives her the locker keys and tells the password. Jasmin creates a mess in the bathroom to make Fateh busy. Jasmin checks the locker. Fateh tells her that he will find the papers. Jasmin doesn’t get the passports. She finds it in Fateh’s hands.

She snatches the papers containing the passports. She fools him and gets glad that he will never know his truth. Tejo realizes that Fateh would be seeing the passports she kept. She returns home to ask him if he got the keys. He tells that he got the papers. He returns the keys. Jasmin tells Sweety that Tejo can’t ruin anything now. Sweety asks her to think of her family, who knows the truth, Rupy can tell the truth to Fateh and expose her lies. Jasmin wants to break Khushbeer and Tejo’s bond.

Tejo doesn’t check the locker. She doesn’t know that the passports are missing. Khushbeer praises Tejo, who cooks everything’s favorite things. Jasmin plans to drug Khushbeer, and put the blame on Tejo. She adds the pill in the tea to raise his BP. Khushbeer consumes the double dose of the medicines because of Jasmin. What will happen to Khushbeer? Keep reading.

Reviewed Rating for Udaariyaan 8th October 2021 Written Update Khushbeer in danger: 5/5 This rating is solely based on the opinion of the writer. You may post your own take on the show in the comment section below.