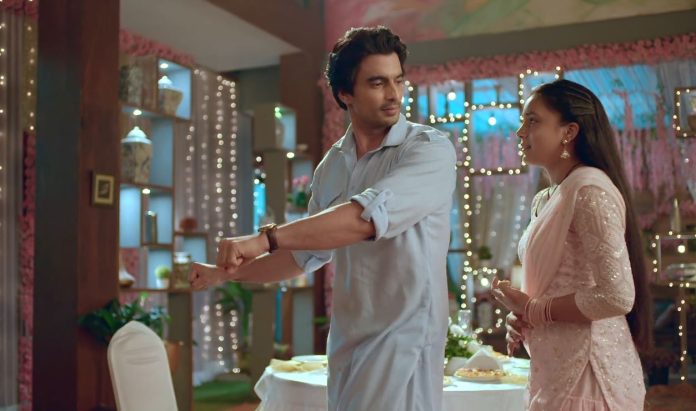 Imlie 8th October 2021 Written Update Romance twist Malini’s doctor informs her that she has an allergy from smoke. Malini pretends innocent and asks him when he told her that as she doesn’t remember anything. Aditya says the doctor called her in the evening. Doctor asks Malini to let him check her up. Malini says to him that she will meet him next morning for a check-up. She says to Imlie that she for no reason called Dr.Sharma. After hearing Malini’s words and seeing her behavior for many days, Imlie’s doubt gets confirmed that Malini doesn’t care about her child.

Aditya tells Malini that Imlie is right, she should let the doctor check her up. Rupi stops him from going with Malini. Malini tells Rupi that she will manage but anyhow Rupi takes her away from Aditya and Imlie. Aditya recalls Sundar’s advice. He praises Imlie’s looks. Aditya pretends to be with Imlie on bike. He makes Imlie smile with his cute antics. “Mai Tera Ban Jaunga” Plays in the background. He makes Imlie hug and hold him from behind. Imlie gets very happy with his cute gesture. He further pretends and welcomes Imlie in Babu Sahib’s garden kitchen. He jokes and Imlie smiles. Aditya makes Imlie sit on the date table organized by him. He also pretends to be a waiter.

Aditya asks Imlie what she would like to eat. He reads a dish like a waiter. Imlie finds Aditya’s behavior cute. She replies to Aditya that she found the restaurant (his preparation) very unique. Aditya expresses his feelings to Imlie and says he likes her a lot. Imlie says she can’t bear him not having trust in her. Aditya says he believes her and asks what she wants to tell him? Imlie tells Aditya that Malini doesn’t care about her upcoming child. She further tells him that Malini is intentionally not taking care of herself. Aditya says that Malini has always been emotionally weak and unstable. He further says that he doesn’t know that it’s Malini’s mood swings or insecurities.

Aditya tells Imlie that he wants to tell Malini that his mother once told him that even a worse woman can’t hurt her child intentionally. Imlie apologizes to Aditya and says that she told him Malini’s reality without proof. She adds that he will soon come up with a proof. She leaves saying that she hopes that this time he would not delete the proof that she will bring against Malini. Aditya thinks when he will be able to express himself properly. On the other side, Rupi and Imlie will try to get Malini out of her room. Imlie fools Malini by asking her to open the door in Anu’s voice.

Malini opens the door and Imlie forcibly gets inside. Malini asks Imlie to leave her alone. She further asks her to not fake concern for her. She tells Malini that she is pregnant, not ill. Malini says that she first wants to be Aditya’s wife and then a mother. She says to Imlie that she wants her rights on Aditya first. Imlie asks Malini to have some shame for risking her child’s life for her own selfish motive. Malini shuts Imlie for lecturing her. She challenges Imlie to snatch Aditya back from her. Imlie tells Malini that if she doesn’t care for her own child, she (Imlie) will take care of the child till her last breath.

Imlie asks Aditya why didn’t talk to Malini when wanted to. Aditya tells Imlie he is not able to understand and process what is going on in his life. He says that he is not able to handle his personal life properly. Imlie thinks that Aditya feels divided. She thinks about doing something and asks for help from god. Next Morning, Aparna and Aditya have a cute mother-son moment. He requests Aparna to pack lunch for Imlie. Imlie overhear them and feels happy. Imlie sees that even being unwell Malini is planning to go college with Aditya. In the next episode, Imlie will say that she has decided that today no female of the house will work and enjoy their time and relax. Aditya will hear this and leave for work.

Reviewed Rating for Imlie 8th October 2021 Written Update Romance twist: 3/5 This rating is solely based on the opinion of the writer. You may post your own take on the show in the comment section below.