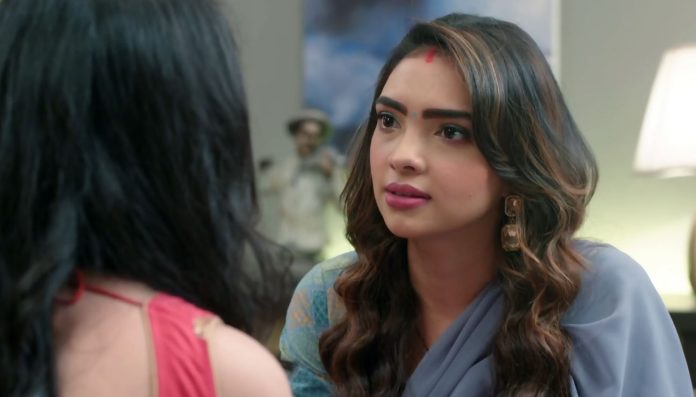 Kumkum Bhagya 9th October 2021 Written Update Deranged Rhea Dida directly alerts Ranbir and Prachi about Rhea, who is eyeing their marriage to break it. She asks Prachi not to care for her own sister, if the latter tries to snatch her husband. She advises Prachi to fight for her husband. Prachi is really stressed about Rhea’s foot injury. She wants to take care of Rhea and remove the ill thoughts coming into her mind. She wants Rhea to turn sweet and happy just like before.

Ranbir finds Prachi in the kitchen. He comforts her on finding her really worried. They get into a sweet romantic moment. Ranbir makes sure that Prachi doesn’t get sad. Shaina happens to see them together. She goes to inform Rhea that she has seen Ranbir and Prachi romancing in the kitchen, Ranbir is really a perfect husband, he is so sweet and loving. Rhea tells that whatever she has seen is the reality, but temporary, it will soon change, Ranbir will soon become of her and that will be the permanent reality.

Meanwhile, Pragya and Abhi have a mature talk after a long time. Pragya gives him a makeover, to boost his self-confidence back. She wants him to quit drinking and live a good life. Abhi thanks her, and she also thanks him. He further apologizes to her, saying that she didn’t react knowing the fact that his sister Aaliya is going to join Pragya’s business rivals. He tells that Aaliya is working with Gaurav Thapar.

She tells that she doesn’t care if Aaliya is working with Gaurav, as long as Abhi is with her. She adds that its not important to know how many people are against you, but that to know how many people are supporting you. She thanks Abhi for supporting her, which means a lot to him. Pragya aims to bring him back to the music world and plan his amazing re-launch as a singer. She thanks Abhi for the trust he showed on her.

Abhi and Pragya challenge each other for the dart game. Abhi shows off his talent by hitting the bull’s eye. Baljeet tells that Abhi is so talented, he is her tiger. Pragya is no less. She chants mantras and hits the bull’s eye. Abhi finds her cheating to chant mantras. She asks him to call someone to make a team if he is afraid to lose. Mitali and Tai ji become the audience to cheer Abhi during the game. Abhi tells that he got a team. Mitali asks Tai ji to dance as the cheerleaders. They cheer Abhi and ask him to win. Abhi misses the second shot. Pragya jokes on his poor shot. She asks him to watch her second dart.

She misses her important calls just because of the game. Shagun and Anchal join Pragya’s team and support her. Abhi tells that Pragya will lose and need many people’s support afterwards. Sushma asks Pragya to concentrate. Even Pragya misses the second shot. Abhi tells that its a big miss. Pragya asks him not to laugh on her defeat, she will get much once he loses. Mitali cheer for him. He asks her not to make noise, else he can’t concentrate. Pragya asks him to find an excuse to lose. Baljeet tells Sushma that their plan worked, Abhi has forgotten the alcohol. Sushma tells that Abhi will soon forget alcohol because of Pragya. Abhi hits the bull’s eye again in the third shot.

Mitali tells that Abhi can also hit the bull’s eye by tying the blindfold. Baljeet wants their love to win. Pragya and Abhi’s match goes on. Pragya loses out. Abhi wins the competition. He happily dances with his family. He enjoys his win. Pragya is glad that their plan worked. Anchal tells that she will be in Abhi’s team next time. Sushma asks Pragya not to worry, their plan has worked. Pragya worries that she lost and Abhi will command her for 24 hours now. She stresses that he will get after her like a bull. Abhi celebrates his win. He dances with Mitali and Tai ji. Aaliya and Tanu ask Abhi what’s happening.

Aaliya asks Abhi about his celebrations, what did he achieve that he is so happy. Abhi tells her that he has defeated Pragya in the dart game, he enjoyed the game a lot, he wants to have such games every day to enjoy his life. He is very happy to win. Tanu asks Aaliya if they have come to see Abhi and Pragya’s bonding. She doesn’t want Pragya to succeed. Aaliya asks her not to worry, Pragya will receive a big shock tomorrow at her office when she sees Aaliya joining the office with Gaurav. Aaliya tells that Pragya will be losing out in business. Tanu gets too happy.

Meanwhile, Rajeshwari calls up Pallavi and gives her a honour, by offering her the chairperson position of the Rajshri foundation. She praises Pallavi for her administration skills. Pallavi invites her home to thank her. Dida is glad to hear this good news from Pallavi. Pallavi tells that just her name is selected as of now. Dida dances for her. Sushma tells Pragya that its her win that she has diverted Abhi. Pragya tells that she could have won the game and controlled Abhi. She adds that Abhi will trouble her, Sushma doesn’t know him. Sushma tells that Abhi has won just to trouble her. Pragya replies that she didn’t know that he will win.

Abhi meets them to taunt Pragya on her defeat. He tells that she has failed, they will play the game again tomorrow. Pragya tells that she is feeling sleepy. Abhi taunts Sushma for not raising Pragya well. Sushma tells that she didn’t raise Pragya, he didn’t care for Pragya well. Abhi asks her to slap Pragya to change her. He tells that he will see her getting beaten up and enjoy the sight. Sushma finds him very naughty. Pragya scares him. Pragya and Abhi argue. Abhi reminds her the condition, that she will obey him for 24 hours, he will sleep on the bed, while she sleeps on the sofa. He wants to enjoy a king’s life.

He tells that he will win the bet every day and celebrate. He looks for the alcohol. Pragya stops him. She succeeds to distract him. He asks her not to stare at him, else she will fall in love with him. He goes to sleep. She wants him to stay happy, and out alcohol from his life. Next morning, Pragya and Abhi reach the office. She complains of her bad sleep because of him. She calls him a ghost.

They have a sweet argument. She is stressed for the big tender. She tells that the company which wins the tender will be successful. He replies that she is poor in games, but good in business, she will win the tender. They are shocked to see Aaliya there. They ask Aaliya what is she doing here. In the flashback, Gaurav and Aaliya have joined hands to ruin down Pragya’s company. She promises to steal the confidential information from Pragya and give to him.

She tells him that she is living in Pragya’s house, she has free access to Pragya’s room. Gaurav welcomes her in his company. She asks for an equal partnership. Aaliya tells Abhi that she is working for Gaurav, she doesn’t know who is her boss. Abhi stops her from this madness, knowing Gaurav is a disgusting man. She tells that Pragya had asked her to do some work, so she has become Gaurav’s employee. Stay tuned.

Reviewed Rating for Kumkum Bhagya 9th October 2021 Written Update Deranged Rhea: 3/5 This rating is solely based on the opinion of the writer. You may post your own take on the show in the comment section below.