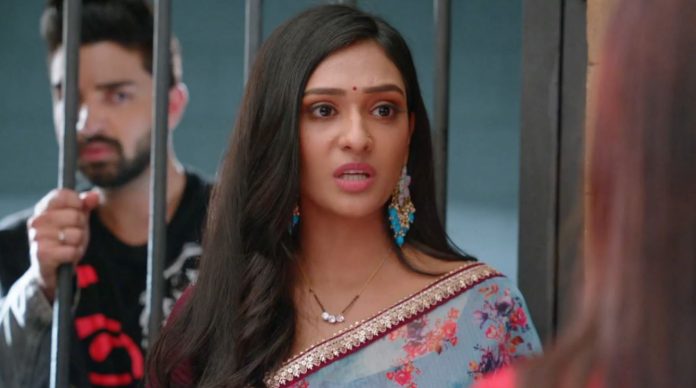 Bhagya Lakshmi 8th October 2021 Written Update Lakshmi stuns Lakshmi is serving tea to all the family members and Neelam is tensed that Rishi has only got bail but his reputation has been massively spoiled. She says that till this case will drag this kind of drama will happen daily. Sonia is angry with Lakshmi and refuses to drink the tea. Virendra says to Neelam that she is telling the truth but she should have informed them and gone to Shanaya’s house. Neelam says that when Lakshmi had gone without asking anyone that time Virendra was silent. Virendra replies that everybody was shouting at Lakshmi so he did not feel the need to say anything. Neelam argues with Virendra. Rishi asks them to stop arguing and says that he has got bail and sits with all of them and now the case is filed then we all will fight it.

Rishi assures his parents that he will win the case. Karishma says that Shanaya is too smart, clever, and cunning as compared to them. Dadi taunts Karishma that yesterday she shouted at Lakshmi that she is a village girl and not from a city then what Neelam did today is also not right. Karishma informs Neelam that she should have not gone to Shanaya’s home. Aayush tells Karishma that yesterday also he tried to make her understand that everybody is trying to help Rishi. He tells her mom that if she cant help at least do not criticize them. Karishma threatens to slap Aayush. Police come to Oberoi mansion. Virendra tells them that they were not expecting them so early in the morning.

Neelam says that she has done it and Rishi was not aware of it so how can he arrest Rishi. The inspector says that she can say whatever she wants in court. Lakshmi says that Neelam went there because she is a mother. The inspector tells her that she is Rishi’s wife. She too had gone yesterday and next time Virendra will go because he is a father and the process will continue but the poor girl Shanaya will keep suffering.

The inspector warns Rishi that he tried to show his power of money and now he will show him the power of law. Dadi tries to explain to the inspector that he can find out if the person is the culprit or not by their look and that Rishi is innocent. The inspector replies that nowadays the culprits are hiding behind the mask of a good person so it is difficult to judge. Aayush asks the inspector if he has an arrest warrant and he provides it to him. Virendra promises the inspector that nobody will go to Shanaya now but he doesn’t listen to them. He puts handcuffs in Rishi’s hands and takes him away.

Lakshmi runs after him and Virendra asks Aayush to go after her. Karishma informs Malishka that Rishi has been arrested again and she is shocked. Neelam is trying to explain to her dad that she didn’t want to go to Shanaya’s house but she went out of concern for Rishi. Neelam asks her dad to get Rishi back home. Malishka gets to know that Rishi is arrested because of Neelam and she didn’t have the need to go there. She asks Karishma some time to think but before that she will go and meet Rishi.

Lakshmi reaches the police station and tells Rishi that she saw a dream where Rishi is free from all the accusations and happy like before. Rishi asks her that she came here to tell this and she says that she saw this dream in the morning and the dream she sees in the morning always becomes true. Lakshmi motivates Rishi to stay positive. Aayush comes and says sorry that the paperwork is late but he shouldn’t worry. Rishi asks Aayush to take Lakshmi home but she is not ready to leave his hand. Malishka enters and holds Rishi’s hands and tells him that Karishma informed her. Rishi indicates Malishka to leave his hand and she says sorry.

She is about to leave when Lakshmi stops her and tells her that she knows what place Rishi has in her heart which shocks everyone. Lakshmi calls Malishka a true friend who reaches out to help even before the family. She thanks Malishka for helping out Rishi every time like a true friend and Malishka smiles at her. The lady inspector declares that the time is up and Lakshmi tells him about the morning dream.

Neelam is crying thinking about Rishi and Karishma instigates her against Lakshmi and tries to push her in Malishka’s favor. Lakshmi is seeing Shanaya’s interview and Aayush forbids her from doing so. Lakshmi has a plan to save Rishi and shares it with Aayush. She tells him that they will compel Shanaya to confess her own truth. Lakshmi comes up with an interesting plan and Aayush says that it is very difficult but Lakshmi requests him to give it a try.

Aayush agrees to partner with Lakshmi to save Rishi. Lakshmi prays to Mata Rani that she always helps the people who are true and Rishi is also speaking the truth and that is why she should support them. A lady constable informs Rishi that his wife’s morning dream has come true and she trusts him a lot. Aayush makes a fake website to trap Shanaya. Lakshmi asks him to arrange for fake hotel papers. Rishi is thinking about Lakshmi holding his hand and telling about her dream. He remembers all the memories he had with Lakshmi and smiles shyly. Is Rishi falling in love with Lakshmi? Will Lakshmi’s plan of trapping Shanaya be successful? Keep reading.

Reviewed Rating for Bhagya Lakshmi 8th October 2021 Written Update Lakshmi stuns: 4/5 This rating is solely based on the opinion of the writer. You may post your own take on the show in the comment section below.