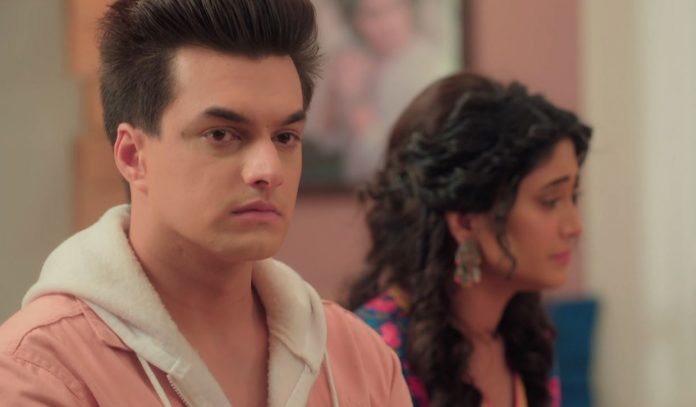 Yeh Rishta Deadly twist for Kartik 8th October 2021 Update Goenkas are having fun and playing dumb charades where Kartik is enacting a movie given by Dadi and Manish is unable to guess it. Manish says that if his mother has given the name it must be an old movie but Kairav says that it is a new movie. Dadi says that they are not capable of playing this game. Manish and Akhilesh are unable to guess the movie. Kairav informs everyone to stop as Sirat is calling. Sirat asks what is happening and Kairav says that they are playing dumb charades and no one is able to guess.

She asks Kairav to show Kartik’s action and immediately guesses the name of the movie as Kal Ho Na Ho. Kartik says loudly that it is Kal Ho Na Ho and Dadi also says yes. Kairav asks her how did she guess did his father prompt her. Sirat says that to understand Kartik’s speech she doesn’t have to depend on words. Kartik asks everyone to carry on as he wants to speak with Sirat. Kartik tells her that he is missing her a lot and asks if he should come to pick her up. Sirat says that it is halftime only and asks if she can leave the practice and come.

Kartik warns her to not miss practice or think about it. Sirat also tells Kartik that she is missing them but has made her heart understand that after the tournament is over they will have lots of picnics and parties. Sirat is practicing with coach Arvind when Mukesh enters and starts recording her actions. Arvind and Sirat are shocked to see Mukesh there. He came to know when he was checking Sirat’s phone and had found a text from Arvind asking her to come at 6 for practice in the same place.

Mukesh says that Sirat training with him had the fear of not getting selected but by training with Arvind she can lose out on her participation chance too. Mukesh threatens Sirat to expose her in front of federation officials. She also answers him that she will tell them about the torture he gives her daily. Mukesh informs her that nobody will speak against him as they all fear him. Mukesh says that he had decided to declare her unfit and disqualify her but now she will be out of the game.

He tells her that she now has to bid goodbye to the Asian championship. Kartik throws away Mukesh’s phone and threatens him that he has recorded his video where he has spoken about troubling Sirat and now he will send this video to the federation. Kartik holds Mukesh and asks Sirat to delete the video. She does it and gives her phone back to Mukesh. Kartik warns Mukesh to not trouble Sirat ever again. Mukesh pushes Kartik and he gets hurt, seeing this he runs away. Sirat gets worried and asks him to go to the hospital but Kartik says that he is fine. They both head home.

Goenkas are happy after coming from the picnic. Goenkas are tensed seeing Kartik in pain and ask what happened. Sirat tells everyone about Kartik’s shuffle with her coach Mukesh and how he pushed him. Manish gets angry and vows to get Mukesh punished. Surekha blames Sirat but Kartik takes her side. Manish says that when the doctor will tell him that Kartik is fine then only he will believe. The doctor checks on Kartik and says that he cannot see any outer injury but based on whatever they have told him it seems that an internal injury has taken place. He asks them to bring Kartik to the hospital the next day and get his X-ray and some tests done while he will prescribe a painkiller for the night.

Dadi gets upset but Kartik pacifies her. They all leave so that Kartik is able to rest. Sirat says that she will break Mukesh’s head but Kartik informs her that after she wins the medal we will decide how to punish Mukesh. Kartik asks Sirat to sleep as the next day is her qualifying match but she refuses to participate and leave Kartik and go. Kartik motivates her that her dreams are important for him and he wants her to fulfill them. Sirat insists on coming to the hospital the next day but Kartik says that he has taken the painkiller, he will be fine, and assures her that he will also get the X-ray done.

Kartik convinces Sirat to not worry about him and focus on the match. Kartik’s pain is not relieved and it starts becoming unbearable but he controls it for the sake of Sirat. He asks God to help him to tolerate the pain as he can’t become a barrier in Sirat’s match the next day. The next morning Sirat finds Kartik missing and gets worried but he brings tea for her. Kartik assures Sirat he is completely fine and she should leave for the match. He lies to Sirat about his pain being decreased. Sirat is happy and prays to god that Kartik should remain healthy. Kartik is unable to control his pain and sits down after Sirat leaves. Sirat is upset and tensed about Kartik’s injury.

At the hospital, the doctor informs Manish and Kartik that they have to do few more tests as there is an internal injury and if it is a serious one they might have to operate on him. Sirat calls Kartik and he asks Manish that they will hide the issue from Sirat as it is an important day for her. Manish cries and prays to god to make Kartik healthy soon. Kartik lies to Sirat and she insists on speaking to his doctor. He is trying very hard to hide his pain from Sirat when she is called for her qualifying match. Sirat senses that Kartik is hiding something from her.

The doctor informs Goenkas that there is a loss of blood from Kartik’s body since yesterday and they need to give him blood but his blood group is not present in their blood bank. Mukesh is at the hospital keeping a tab on Kartik’s status. Sirat gets to know that Kartik’s operation was stopped as they could not get the blood matching Kartik’s blood group. Will Sirat leave her qualifying match or fight back for Kartik? Keep reading.

Reviewed Rating for Yeh Rishta Deadly twist for Kartik 8th October 2021 Update: 3/5 This rating is solely based on the opinion of the writer. You may post your own take on the show in the comment section below.