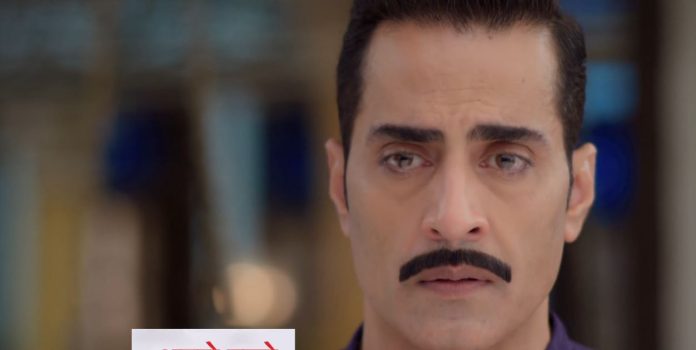 Anupama 11th October 2021 Written Update Vanraj in tears Kavya comes home along with Anupama. The former tells Vanraj and Leela about her new job in Anuj’s company. She wants to earn well and get back her lost status. She doesn’t want to sit idle at home and become a victim of Vanraj and Anupama’s clashes. Vanraj gets too upset knowing Kavya has joined Anuj’s company. He tells Kavya that Anuj is just a puppet for Anupama, Anuj has agreed to take Kavya onboard because of Anupama’s decision. Anupama knew that Vanraj will get frustrated knowing Kavya’s decision to join Anuj.

She stays silent and watches them arguing. Kavya tells that she has got the job on her merit, Anuj and Anupama’s friendship has nothing to do with her job. She doesn’t think Anupama did a favor on her by agreeing to take her in the big project. Anupama also feels that Kavya can be proved as an asset for Anuj’s company, because of her good experience. Kavya tells Vanraj that she feels he has really lost his mind, he needs medical help. She asks him to visit a doctor. Vanraj gets angered on her taunt.

He angrily hits a flower vase, and gets his hand injured. Leela blames Anupama and Kavya for his pain. She asks them to attend Vanraj’s wound. When Anupama gets concerned for his wound, Vanraj shoves her away. Kavya holds Anupama in time and saves her from the fall. Vanraj shouts on Anupama and asks her not to touch him.

Leela supports her son. She feels his every word is right. She is already against Anupama and Anuj’s professional tie-up. She doesn’t want Kavya to follow Anupama’s path and leave Vanraj upset. Pakhi witnesses their loud argument, and gets heartbroken. She is tired of the family drama. She tells Vanraj that parents take divorce when they get troubled by each other, but what should a child do, when a child gets troubled by the parents. She cries seeing her parents fighting. Vanraj breaks into tears hearing Pakhi’s emotional statement. Will he realize his blunt mistake and apologize to Anupama? Keep reading.

Kavya accepts the job and promises Anuj that Vanraj won’t pose a problem for them. He advises her to go home and explain Vanraj to not do any drama further. Kavya gets happy to get the big opportunity. He asks Kavya to thank Anupama for giving her the job. Leela finds Pakhi a cake and is shocked. She doesn’t know Pakhi can bake a cake. Pakhi gives the good news that she has topped the exams. She plans a surprise for Anupama and Vanraj. She wants to bake a cake for them and give them the good news.

Leela congratulates Pakhi. She helps Pakhi in baking the cake. Kavya thanks Anupama for giving the job to her, without considering their past. Anupama tells that she doesn’t want to become Kavya’s enemy and stop her from profession. She expresses her great thoughts. She tells that she will always remember Kavya and her bitter terms, but they can work together. She remembers that Kavya had fought for her once and always paid her respect. She promises to pay back the same respect to Kavya. She doesn’t regard Kavya a wrong person. She requests Kavya not to break anyone’s hopes and dreams.

Kavya accepts her request. Anuj respects Anupama even more after hearing her thoughts. Pakhi awaits Vanraj and Anupama. She tells them that she has topped the exams. The family celebrates with Pakhi. Devika reacts on knowing about Kavya’s job. She asks Anuj to not hire Kavya knowing about Vanraj’s temper issues. Anuj believes Anupama’s decision. Devika asks him to protect Anupama. She warns him against the problems that will arise after Kavya’s joining. Anuj loves Anupama. Devika knows it well. He tells that he wants to empower Anupama, he is hurt to be with Anupama and realize the feeling that he can never win her. He doesn’t want to do injustice with Anupama.

Anuj has learnt greatness from Anupama. He is proud that he loves a woman like Anupama. Devika tells that Kavya can’t create a great drama independently. She warns him to stay normal and not become great like Anupama. She asks him to handle Anupama. He knows that Anupama needs care and protection from Vanraj and Kavya’s evil plans. Vanraj and Kavya get into a big argument because of the job. He asks her to keep her husband’s respect. Kavya tells that its not humiliation, its her self-esteem to work rather than begging others for money. He asks her to beg some stranger than begging Anuj and Anupama. Pakhi cries a lot seeing his parents fight. Anupama is afraid that their fights will make them lose the family.

Anuj tells Kavya that she can take time to decide if she wants to work in his company or not with terms and conditions discussed. Kavya desperately within one minute answers him that she will work with him. She also promises that Vanraj will not create any problem in his company and project. Anuj says it will only be better for them and for Vanraj too. He asks Kavya to warn Vanraj that in Bhoomi Pujan he met Anuj, but if tries anything cheap again he will meet Anuj Kapadia. Kavya agress and refers to Anuj with his name. Anuj tells her that only his friends and Partners can call him Anuj, his employees call him Anuj Sir.

Kavya apologizes to Anuj and calls him as Anuj Sir. She thanks Anuj, the latter asks the former to thank Anupama. He further tells her that she got the job because of Anupama and should thank her instead. Kavya assures him that she will surely thank Anupama. At Shah house, Baa asks Pakhi what she is doing in the kitchen as she never steps in the kitchen. Pakhi tells Baa that she is baking a cake as she stood first in her half-yearly exams. Baa blesses and praises her.

Pakhi says that Anupama remains busy while Vanraj stays stressed so she will surprise them in the evening. She also asks Baa, will her parents like her surprise. Baa replies that parents find happiness in children’s happiness. Pakhi replies Children also find happiness in their parents’ happiness.

Pakhi asks Baa and wonders why people call today’s teenagers selfish people. She says yes sometimes teenagers act selfish but they never feel happy in their parents’ bad times. She hopes that everything will become normal for sometime. She teases Baa saying that she doesn’t spit out interesting taunts nowadays. Pakhi, tells Baa that she proudly used to tell her friends about the entertaining fights in their house. She also says that these days fights in their house make everyone sad. Baa assures Pakhi saying that nobody will become sad as the daughter of the house has topped the class.

Kavya goes to Anupama and thanks her. Anupama asks her to thank Anuj instead. She tells Anupama that she deserves to be thanked. Kavya further asks Anupama, didn’t she remember their old fights when she made the decision of giving her the job. She replied to Kavya that she just thought how a person feels when they do not get what they deserve or what’s their right and agreed to give her the job. She explains to Kavya that they should not fight anymore as people with orthodox mindset take advantage of it and doesn’t let women grew successful in professional life.

Anupama says to Kavya that they can at least try working together. She tells Kavya that she respected her when she didn’t knew about her and Vanraj. She indirectly praises Kavya’s thinking for women’s success. Anupama further requests Kavya to not ruin anything in the project as many women’s future depend on it. Anupama’s respect increases in Anuj’s eyes when the latter hear and see Anupama’s behavior with Kavya. He hopes Vanraj doesn’t come in between Anupama’s success this time as he will not let any harm to Anupama.

Bapuji tells that Vanraj in anger fired their cafe’s chef Vinod. Baa tries to defend Vanraj. Bapuji asks Baa why she is never able to see her son’s mistakes. He asks her who will run the cafe. Baa blames Anupama for everything saying the latter is stressing Vanraj. Bapuji defends Anupama by giving Baa a befitting reply. He tells Baa that Anupama is not with Vanraj to save his Cafe this time. Baa gets stressed thinking that Vanraj will break down with Cafe’s present condition. She prays to god for Vanraj’s happiness.

Nandini tells Kinjal about Samar’s small stage accident in delhi. She asks Kinjal to not worry as Samar is safe now. Nandini tells Kinjal that Samar’s friend told that it seemed like a planned accident. Kinjal asks her to not worry. Everyone reaches home and Pakhi gives them the good news of her coming first in her half-yearly exams. Whole family praises and blesses Pakhi. Pakhi jokes with Vanraj and Anupama. They cut cake and celebrate. Kavya interrupts Pakhi by requesting herv to please video call her brothers in her room and give family some time to talk about important thing.

On the other side, Devika gets shocked when Anuj tells her about Kavya joining their company. She asks him how he believed Kavya’s promises? She further tells him that why is he acting like Anupama and giving a job to Kavya. She tells him that he should protect Anupama and he laid a landmine in his own office. Devika warns Anuj that someday this landmine will explode. At Shah house, Vanraj questions Kavya where she went. She angers Vanraj by telling him about her meeting with Anuj.

Anuj tells Devika that he loves Anupama. He also tells Devika that he feels happy as well as painful seeing Anupama daily in front of him. Anuj further states his point telling Devika that he gave Kavya the job because he wants to be fair with every woman as in this time they need it to prove their worth. Kavya tells Shah’s that she is joining Anuj and Anupama’s team as project marketing head. Vanraj asks Kavya to have some self-respect. Kavya tells Vanraj that a person loses self-respect in asking for a loan, not when he/she asks for a job. She tells Vanraj that her final decision is that she will work with Anuj and Anupanma. Anuj and Kavya will see a family picture of Anupama, Pakhi and Vanraj on social media.

Anuj tells Devika that he is learning to be a good person from Anupama. They also discuss how to protect Anupama from any upcoming trouble. Both Kavya and Vanraj fight with each other. Vanraj tells Kavya that Anuj is Anupama’s hand puppet. He tells Kavya to have begged for a job in front of someone else. In the next episode, Vanraj will push Anupama and Kavya will save her from falling. Pakhi will come in between and cry. She will ask what a child should do when they get frustrated by his/her parents. Both Vanraj and Anupama will discuss to end their fight to stop their family from breaking or getting ruined.

Reviewed Rating for Anupama 11th October 2021 Written Update Vanraj in tears: 5/5 This rating is solely based on the opinion of the writer. You may post your own take on the show in the comment section below.