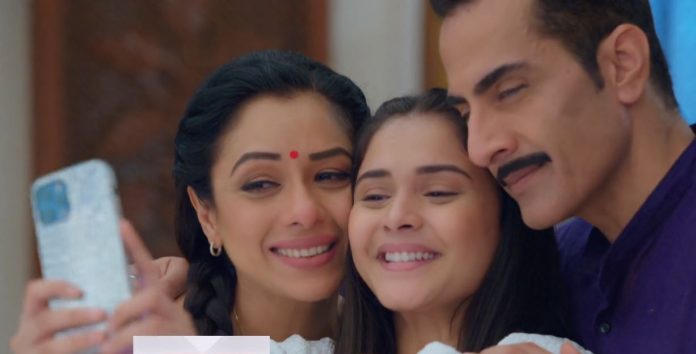 Anupama 12th October 2021 Written Update Happy family Pakhi breaks down after seeing Vanraj and Anupama’s argument. Vanraj feels humiliated because of Anupama and now Kavya. He asks Kavya to beg some stranger than Anupama. Both Anupama and Kavya find Vanraj’s thinking disgusting. He argues with them and gets himself hurt. Vanraj will push Anupama and Kavya will save her from falling. Pakhi will come in between and cry. She will ask what a child should do when they get frustrated by his/her parents. Vanraj cries on hearing this from Pakhi.

Both Vanraj and Anupama will discuss to end their fight to stop their family from breaking or getting ruined. Pakhi has an emotional outburst in front of the family. Anupama and Vanraj grow worried for Pakhi. They are Pakhi’s parents and love her a lot. They don’t want Pakhi to get subjected to more negativity and sorrow. Anupama tells Vanraj that Pakhi got upset because of their fights, Paritosh had already left them to stay nuclear, he got fed up with them and now Pakhi wants to get away.

She fears that the family will break apart because of their fights. She wants to end the fight with Vanraj for the sake of her children. Vanraj respects her decision, taken in the interests of the family. Anupama and Vanraj go and cheer up Pakhi. They appear happy together and click a selfie with Pakhi. Kavya finds a happy family picture seeing them. She grows insecure, while Pakhi’s online post reaches her new friend Anuj. Anuj too is shocked to see the picture of them. Should Anupama forgive Vanraj over the past? Comment your views. Keep reading.

Vanraj says to Kavya that Anuj gave her a job only to humiliate him. Kavya smiles and asks Vanraj if he really thinks that Anuj Kapadia needs to spend so much money and effort to humiliate him. She angers Vanraj saying that to humiliate him, Anuj just needs to crosby him. Kavya asks Vanraj, does he really think that a big business man like Anuj would think about him 24 hrs. She increases Vanraj’s anger by explaining to him that even if she doesn’t think about him 24/7, then why will the other person. Vanraj gets out of control and hurts himself when Kavya asks him to see a doctor as he needs help. Everyone gets shocked.

Kavya and Anupama try to check Vanraj’s wound but he doesn’t let them. Anupama asks to control, as this way he himself is proving Kavya’s words right. He asks Kavya to tie her handkerchief in Anuj’s hands. Kavya replies to him that he has got a wound on his hand not Anuj, then why will she tie the handkerchief on Anuj’s hand. Angry Vanraj, tells Kavya and Anupama that he doesn’t want any of them. He also says that Anuj has ruined his life. Anupama and Kavya ask Vanraj why he blames others for everything. They also ask him how Anuj ruined his life, when he gave his wife Kavya a good job?

Kavya asks Vanraj to grow up and stop thinking that someone is planning against him. Anupama agrees to her. She asks Vanraj to himself take responsibility for his happy and sad times. Kavya agrees to it. Vanraj asks Anupama and Kavya, if they are on the same team now? He warns them to stay away from him. Angry Kavya gives Vanraj’s first responsibility to Anupama. Vanraj pushes Anupama when she tries to apply the medicines on his wound. Kavya saves Anupama. Pakhi witnesses all this and falls from the stairs. Everyone gets worried for her and cares for her.

Pakhi says she got hurt and wounded from inside, whose marks cannot be seen. Pakhi says she has got fed up with family fights, which have been going on for years. She tells Vanraj that she feels scared seeing everyone always fighting. Pakhi also says that she feels most scared when her parents (Vanraj and Anupama) fight. She asks, from where did they get so much stamina to fight. Pakhi further asks why he uses foul or bad words with Anupama. She says that she doesn’t need to have bad friends or to see bad things on TV as she is learning bad words from the elders of her family itself. Pakhi asks Anupama to understand Vanraj, as he is facing the same type of jealousy that she feels when her best friend gets more marks than her.

Pakhi also asks Vanraj to try understanding Anupama as she never got jealous of him even though he in his whole life scored more than her. She asks Vanraj why he interferes in Anupama’s life when the latter doesn’t interfere in his. Pakhi also asks Baa to not always stretch the matters in the family. She also asks Kavya to try calming down sometimes. Pakhi explains they can’t control the situation but can control the way they react to it. She says parents take divorce when they get fed up with each other, but what should a kid/child do when he/she gets fed up with his/her parents.

Pakhi says she feels like taking divorce from her whole family. Kavya says everyone does drama in the Shah family. Anupama and Vanraj hug Pakhi and apologize to Pakhi. They ask Pakhi from Pakhi to solve their problems. Pakhi agrees to give them time and asks them not to fight again. After getting consoled, Pakhi clicks a picture of herself with Anupama and Vanraj. She says that this picture will be a reminder of their promise to her. Anuj sees the same picture on his social media handle and recalls Pakhi’s words from the bhoomi pujan, when she said that she can’t see her family breaking up.

Vanraj goes to Anupama and discusses with her that Pakhi was right. On the other side, Baa and Bapuji discuss their fights too. Anupama-Vanraj and Baa Bapuji discuss their faults and decide to try not fighting anymore. Anupama calls Vanraj, Sweety’s (Pakhi’s) father. Vanraj feels good about it. Both of them discuss that they need to understand each other. She tries to make Vanraj understand that she never tried to hurt him as she knows it will hurt her kids too. She explains to Vanraj to not always get angry as he ruins his own personal and professional life by doing it.

Anupama also explains to Vanraj that Kavya being an educated woman for her mental peace needs to work. She further explains that it is better for Kavya to work with her and Anuj instead of working with a man like Dholakia. Anupama tells Vanraj, he shouldn’t have any expectations from their broken relationship. She requests him to finish off their fight as it is breaking their family, Vanraj agrees. She tells Vanraj that she doesn’t want to defeat him, she is just walking on her path to success. Vanraj returns to his room and sees Kavya with love and care. Anupama on the other hand goes to Pakhi’s room and cares for her. She promises sleeping Pakhi that she will never hurt her ever.

Next morning, Anupama tells Anuj that she wants to succeed but not by hurting her children. She shocks Anuj by telling him that she would not be able to work with him anymore. In the next episode, Anupama and Vanraj will try to make Pakhi happy. Nandini will shock Anupama by telling her that if she does not return to USA, then Rohan will kill Samar.

Reviewed Rating for Anupama 12th October 2021 Written Update Happy family: 5/5 This rating is solely based on the opinion of the writer. You may post your own take on the show in the comment section below.