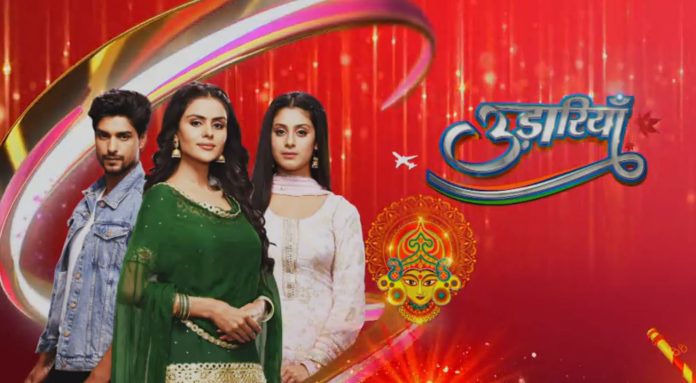 Udaariyaan 12th October 2021 Written Update Navratri twist Tejo finally brings Simran home in front of Khushbeer and the entire family by failing Jasmin’s plans. She convinces Simran to meet the family and reveal that Candy is her son, before Jasmin brings out the truth in a wrong way, that could hurt them further. Tejo supports Simran, knowing her hardships in raising Candy alone. She wants the family to accept Simran, and get her married to Buzo to give a good family to Candy. Tejo’s motives are good and her moves are clear. Khushbeer understands that Tejo can never do wrong.

He loves Tejo, but his anger on Simran makes him hate the latter. He is helpless to his heart which isn’t ready to forgive Simran. Jasmin takes an advantage of the situation, when everyone in the family is so tensed about Khushbeer’s reaction. They don’t know if Khushbeer will get convinced by Tejo and accept Simran. They await Khushbeer’s decision, and find Jasmin provoking Khushbeer against Tejo. Jasmin tells Khushbeer that his favorite daughter Tejo has lied to him and kept him under darkness for so many days just to make their bonding with Candy stronger.

Tejo pleads Khusheer to forgive Simran. Khushbeer yells at her and declares that he hates Simran, he will never forgive her for the humiliation she served the family by eloping with her lover. He decides to not accept her back in the family. Tejo feels she has failed in convincing Khushbeer. She loses hope and asks Simran to come with her, because the family isn’t able to accept her. She takes Simran and Candy to the house exit, hoping that Khushbeer will stop them for Candy’s sake. Candy asks Khushbeer to stop him. Candy’s innocent plea melts Khushbeer’s heart. Will Khushbeer ultimately accept Simran? Keep reading.

Tejo reminds Khushbeer that he used to call Simran as his house Laxmi. She asks him to open the doors of his heart for Simran once again. Khushbeer asks Tejo why did she get Simran back. He doesn’t want to forgive her. He finds it hard to forgive his daughter. Jasmin tells that Tejo lies to everyone and brought Candy home. He is much upset that Tejo has made fun of his love. Tejo accepts that she has done wrong to hide the truth from him, just because she feels attached to him.

She wants him to feel the same attachment with Simran. Fateh agrees with Tejo. He wants Khushbeer to think calmly. Jasmin asks Fateh not to support the lie. Fateh asks Jasmin to stop it. Jasmin tells that Tejo has planned everything to make Candy bond with the family. Rupy and Satti grow angry on Jasmin for her upfront evil. Jasmin rebukes Tejo for playing a game with Khushbeer. Fateh stops Jasmin from speaking in between if she doesn’t know anything. Khushbeer doesn’t listen to the entire family, who beg him to forgive Simran. Jasmin tells that Tejo had lied about Candy’s mother with an intention to cheat them.

She asks Tejo why was she helpless to lie to them. She tells that Simran is hiding a big truth about her son. Tejo angrily slaps her to make her mouth shut at once. She asks Jasmin not to question Candy’s identity, he is Simran’s son. Khushbeer asks Tejo to take Simran away. Tejo asks Simran to come with her, she has no place in the family’s heart and house. The family cries for Simran and Candy. Candy refuses to go away leaving Khushbeer behind. He runs to Khushbeer and makes him emotional. Tejo and Simran ask Candy to come with them. Candy asks Khushbeer why is he upset with him. He wants Khushbeer to talk to him.

Tejo asks Candy not to request Khushbeer and just come with her. Khushbeer stops Candy from leaving. Finally, he melts his heart for Simran and her son. He asks Candy to stay with him in their house. Candy tells that he can’t stay without them forever. Khushbeer tells that Simran can also stay with them. He accepts Simran in the house. Tejo finally unites Simran with the family. Her plan succeeds. She makes sure that Simran gets an acceptance by Khushbeer. The family celebrates happiness with Simran’s comeback. Rupy and Satti bless Tejo for her big move to unite a family. They feel proud of her.

Fateh realizes what Tejo has done for the family. Tejo takes Simran in the aarti. Tejo and Fateh perform the aarti together. Fateh goes to thank Tejo for her generous deed. He tells that nobody could ever convince Khushbeer, but she has done it. She tells that she didn’t do this for him, but the loving family. She had to fulfill her promise towards them. He tells her that he was wrong before, the situation was different, he is feeling very sorry. She asks him to leave. She wants to convince the judge to free her from the six-month condition for the divorce. She wants to leave soon.

Jasmin asks Fateh why was he thanking Tejo. He gets angry on her. He knows that she can never understand what Tejo has done. She blames Tejo for the lies. He tells that she has done wrong, Tejo did a big favor on him. He asks her if she doesn’t love Candy, Simran is his sister, he is really happy with her return. He doesn’t want to hear anything wrong about Simran. Gurpreet thanks Tejo for fulfilling her promise and bringing Simran home. Tejo consoles her and asks her to never cry.

She prays that Khushbeer accepts Simran. Simran meets Khushbeer to thank him for accepting Candy. Gurpreet tells that she never got to know about Simran’s struggles. Tejo feels hard to tell the truth of Simran’s past. Tejo knows that Simran’s past will open you and bring a phase of sorrow again. Keep reading.

Reviewed Rating for Udaariyaan 12th October 2021 Written Update Navratri twist: 3/5 This rating is solely based on the opinion of the writer. You may post your own take on the show in the comment section below.