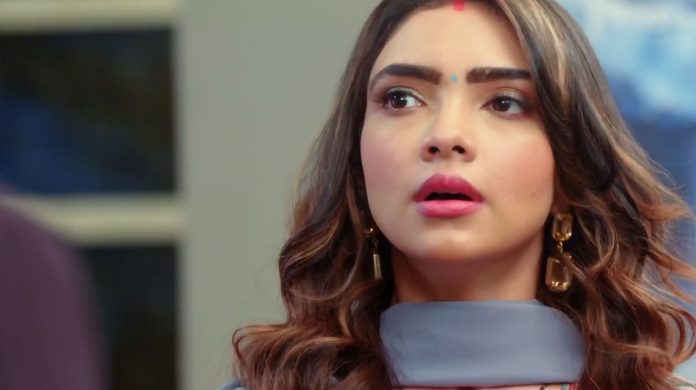 Kumkum Bhagya 14th October 2021 Written Update Shameful Rhea plans to give the spiked tea to Prachi. She asks Shaina to give the right cup to Prachi. She gets too happy thinking Prachi has picked the spiked cup of tea and now she will out of her way. Prachi takes the spiked tea and consumes it. Rhea waits to see the reaction of the medicine. On the other hand, Abhi asks Aaliya to stop working for Gaurav. He tells her that she shouldn’t work for Gaurav, who is Pragya’s enemy. Aaliya doesn’t listen to him. She explains that she didn’t help Gaurav against Pragya, she joined his company, not his enmity. She further adds that she didn’t leak any quotations to help Gaurav.

Abhi catches her lie and asks her why did she bring up the matter when he didn’t even ask about the quotation leak. She tries to cheat him again by cooking a story. Abhi understands that she is lying. He declares his final decision that she will not work for Gaurav, if she wants to stay in Pragya’s house. He asks her to leave the house if she wants to convince the job. Aaliya gets compelled to agree to his decision. She tells hat she will quit her job. Pragya overhears their arguments.

She mentions that she has no objections with Aaliya’s job in Gaurav’s company, Aaliya can work for Gaurav if she wants. Abhi gets raged on Aaliya. He remains firm on his decision to stop Aaliya. Abhi angrily leaves. Pragya gives a warning to Aaliya and asks her to never attempt to hurt her business. Aaliya feels insulted by Pragya.

Next morning, Rhea wants to leave for the honeymoon trip. She is happy to see Ranbir coming alone with his bags. She assumes that Prachi fell sick and won’t be able to join them. She receives a shock when Prachi comes with her bags and joins Ranbir. Rhea learns that Shaina has consumed the spiked tea and fell unwell. She didn’t wish her plan to fail this way. She thinks Shaina has made this blunder. Rhea gets upset when the elders ask the couples Ranbir-Prachi and Siddharth-Rhea to enjoy their honeymoon. Rhea doesn’t want to see Prachi with Ranbir. She has no option than to tolerate Prachi.

Both the couples leave for Manali. Siddharth gets hopeful that Rhea is trying to save their marriage. He tries to talk to Rhea, but she behaves rudely with him once again, leaving him puzzled. Rhea asks him to focus on the road while driving. She wonders how Ranbir and Prachi would be romancing alone in their car. Ranbir and Prachi get into a cute banter. He asks her to live the moment and confess love to him. He wants her to speak out her heart. They have a series of cute moments.

She sees Siddharth’s car parked on the side of the road. She then finds Siddharth and Rhea waiting on the road. She asks Ranbir to stop the car and find out what’s the matter. Ranbir stops the car and asks Siddharth about his car failure. Siddharth replies that the car ran out of fuel. He adds that Ranbir and he took their cars to get the fuel tanks filled up. He wonders how did the car ran out of fuel so soon. Rhea recalls that she has broken the fuel tank to leak the fuel.

She wanted the car to run out of fuel, so that Ranbir and Prachi give them a lift. Ranbir asks Siddharth and Rhea to get into his car, they will cross the journey together. Rhea happily sits in Ranbir’s car. They reach the hotel. Rhea goes aside to speak to Aaliya. She tells Aaliya that her plan has failed badly, Prachi hadn’t consumed the spiked tea and she is totally fine to accompany them. She adds that Prachi has become a headache for her. She wants to share her plans with Aaliya, but the call gets disconnected. Aaliya gets angry that she couldn’t complete the talks. She sees Tanu there.

Rhea goes back to Siddharth to know about their room. She gets sad when she learns that her room is too far from Ranbir’s room. She wanted a room close to Ranbir’s room to execute her plan. Prachi and Ranbir go inside their room, leaving Rhea jealous. Prachi confesses her love to Ranbir. She finally fulfills his wish. She asks him to never stop loving her, and she will also love him forever. They have a romantic moment. Rhea stoops much low to cross all the limits and win Ranbir. She attempts to win over Ranbir by entering his room at night. She begins creating a situation to present themselves in a compromising position. Will Prachi have faith on Ranbir? Will Rhea succeed? Keep reading.

Reviewed Rating for Kumkum Bhagya 14th October 2021 Written Update Shameful: 3/5 This rating is solely based on the opinion of the writer. You may post your own take on the show in the comment section below.