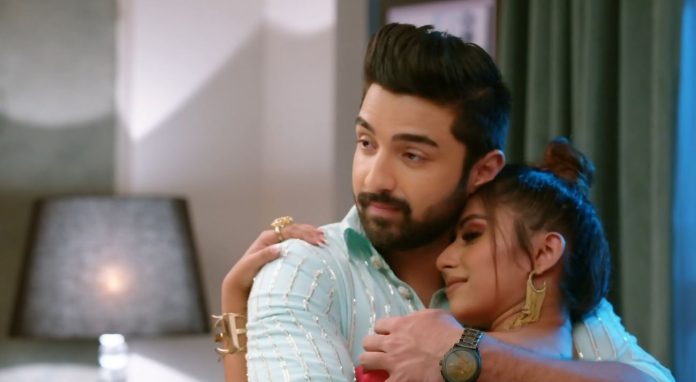 Bhagya Lakshmi 14th October 2021 Written Update Affair news out Lakshmi tells Rishi that he doesn’t know how much the family loves him. She adds that everyone was worried for him, nothing existed without him. Rishi feels Lakshmi’s true love, which he doesn’t deserve. He feels guilty and shares his feelings with Ayush. Virender thinks Rishi has fallen in love with Lakshmi, he is lying to himself that he loves Malishka but the truth is, he just loves Lakshmi. Lakshmi thinks Rishi has bought the love bands for himself and her. She thinks its a sign of his love. She wants to give him a return gift. Rishi waits to meet Malishka and present the gift.

Rishi goes to meet Malishka. He gifts her the love bands. Lakshmi thinks Rishi has ordered the love bands to show their forever love. She is happy that they have become a lovey-dovey couple. Rishi hugs Malishka and gets into a moment, while Lakshmi plans a surprise for him at home. Karishma foils Lakshmi’s surprise by ruining the decorations. She doesn’t think Lakshmi can do anything so soon. Malishka wants to see what can Lakshmi do in the party. Lakshmi gets worried seeing the decorations falling down.

She struggles to manage the party arrangements. She gets ready to meet Rishi, who is busy romancing Malishka. Malishka has called him just to make him say I love you to her. She adds that he is of her forever. Rishi tells I love you to Malishka. She tells that they are of each other. Rishi hugs Malishka. Lakshmi happens to reach the room. She spots Rishi with Malishka. He breaks the hug and gets scared thinking if Lakshmi has seen him. Lakshmi has incomplete wishes awakening in her heart. She is about to confess love for Rishi, but his love is for someone else. Lakshmi receives a big shock when Rishi and Malishka’s affair truth comes out. Keep reading.

Rishi surprises Malishka with the love bands. He hugs her and tells that he loves her a lot. Shalu argues with Ayush about his mother. He asks her to see Lakshmi’s loving side and learn from her. He jokes on Shalu’s personality. They get into an argument. She doesn’t want to spare him. She goes to meet Lakshmi. She surprises Lakshmi. Lakshmi gets too happy seeing her sister, whom she dearly loves. Shalu realizes that Lakshmi is in love with Rishi.

Lakshmi asks Virender and family to come in the party at 7 pm. She checks the decorations. She asks Shalu and Ayush not to fight and waste time. Malishka shares her happiness with Karishma. She tells that Rishi has gifted her the love bands. Sonia sees Lakshmi commanding the house. She tells Karishma that Lakshmi is making all the arrangements perfectly and fulfilling her promise to Virender. She has no issues if her parents’ anniversary party gets ruined. She wants them to put out Lakshmi from the house.

Neelam asks him to let her relax. She has no answers to him. She tells that it was her dad’s decision that she gets married to Virender. Sonia and Karishma cut some rope to ruin the decorations. Lakshmi’s hard work gets ruined. Karishma informs Malishka that Lakshmi’s face has turned pale after the shocking fall out of the decorations. She feels Lakshmi is totally finished. Lakshmi asks Shalu to help her. Ayush asks Lakshmi to take the DJ’s call. DJ informs Lakshmi that he can’t come because of a personal issue. Lakshmi doesn’t know how will she handle everything. She speaks to her uncle. She tells about the problems faced. She thinks of a plan to fix things.

Reviewed Rating for Bhagya Lakshmi 14th October 2021 Written Update Affair news: 3/5 This rating is solely based on the opinion of the writer. You may post your own take on the show in the comment section below.