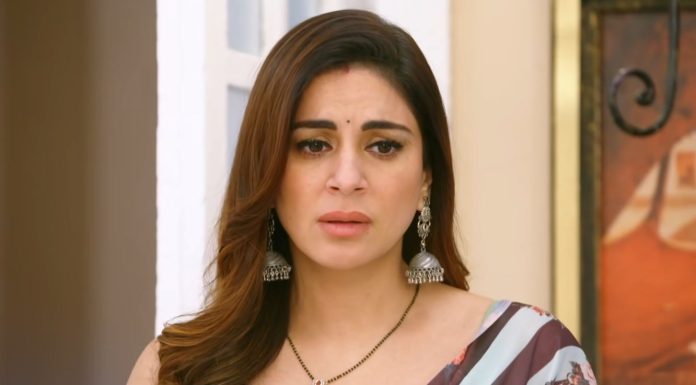 Kundali Bhagya 15th October 2021 Written Update Mission Rishabh begins Preeta tells Sameer, Kritika and Karan that Sandeep’s statement wasn’t right, there is something wrong which they have to find out. This way, they can prove Rishabh innocent. She decides to spy on Sandeep. Preeta, Shrishti and Sameer go to meet Sandeep’s doctor, to know if Sandeep’s injuries are really fake. They want the doctor to testify against Sandeep. They reach the doctor’s house to have a talk.

She meets Sandeep’s doctor and asks him about Sandeep’s injuries. He rebukes her for faking a broken leg in front of the constables just to get an entry. He tells her that Sandeep’s injury isn’t fake like hers. He adds that Sandeep is really hurt, he can’t walk or be on his own because of severe head injury. Shrishti sympathizes with Sandeep, knowing about his serious condition. Doctor lies to Shrishti and sends her away. Shrishti informs the same to Preeta, who isn’t easily convinced. How will Preeta find the truth?

Preeta asks Shrishti to sit in the car, she will go and speak to the doctor. Shrishti tells that she will make a Dabangg entry if the doctor lies to them. Preeta asks Sameer to hold Shrishti’s hand and not let her move. Shrishti scolds Sameer for misbehaving. Preeta tells that she will call Karan, he is too tensed, he went to say sorry to Rishabh, he is worried for his brother, but he should know that Shrishti is troubling them. Shrishti asks her not to call Karan.

Preeta goes to the doctor’s house gate. She sees the cops and returns. She tells Sameer that she can’t get through, there is police guarding the house. Shrishti goes in speed, and takes a turn. She apologizes to Preeta for not listening to her. Meanwhile, Rakhi and Sherlyn wait at the police station to meet Rishabh. Rakhi goes to talk to a doctor. Rishabh sees Sherlyn and recalls the wounds given by her cheat. Sherlyn doesn’t want to anger him. She tries to avoid him. Rishabh gets mad at her and turns to go. Rakhi meets him. She hugs him. Sherlyn knows that Rishabh will not tell the truth to Rakhi at such a place, when Rakhi is already tensed. She tells him that Rakhi isn’t taking proper food and is just crying for him.

Rakhi tells him that even Sherlyn isn’t looking after herself. Sherlyn fakes her tears and concern for Rishabh. He knows that she is faking emotions to fool Rakhi. He doesn’t even like to see her face. She tells him about Mahesh’s unwell state. She adds that things will get fine when he returns home. She hugs him. He tolerates her just for Rakhi’s sake.

Rishabh asks Rakhi to take proper food and look after herself. Rakhi asks him to just come home soon. Sameer asks why are they scared of the police when they didn’t do anything wrong. Preeta tells that police will not let them go inside. Shrishti finds Sameer senseless. He asks Preeta to take his side, Shrishti always insults him. Shrishti tells that Preeta had gone to meet Sandeep as a doctor, he is a victim in the case, he has accused Rishabh, no member from the Luthra family can meet him.

Preeta explains that they came to ask the doctor about Sandeep’s truth, if Sandeep knows this, then he will file a complaint against them that they tried to bribe the doctor. Sameer tells hat they shall really bribe the doctor. Preeta and Shrishti disapprove the idea. She tells them that she isn’t from Luthra family, she is just Shrishti, she can go inside and meet the doctor, she isn’t related to Luthras, she isn’t famous, she can easily get the work done. Preeta likes the idea and asks her to go inside. Shrishti tells that she will behave hurt and act like a patient. Shrishti and Sameer have their banter going.

Preeta wishes Shrishti all the best. Shrishti goes to play the drama. Sameer tells that Shrishti argues with him all the time. Sameer and Preeta wait outside. Shrishti fakes a twisted leg and goes inside the doctor’s house to get help. Constable asks her to go to some other doctor. She asks why is the police at the gate. She asks if there is any robbery case. She refuses to go. She tells that she can’t go anywhere else, she is in much pain. She cooks a long story to fool them.

She asks constables to let them go inside and meet the doctor. Constable questions her a lot. She tells that its an internal injury, fracture won’t be seen externally. She asks him to let her go inside for his mum’s sake. Preeta and Sameer find her overacting. Constable flirts with Shrishti, which angers Sameer. Preeta calms down Sameer. Shrishti scares the constables and gets an entry in the house. Shrishti meets the doctor, who asks her about the internal injury. She shuts the door. He asks her why did she barge into the house by a lie. He threatens that he will call the police. She takes his phone.

She tells that she is Preeta’s sister, she has come to get information from him. He tells that he can’t talk to anyone from the Luthra family. He asks Shrishti to leave. She refuses to leave without knowing the truth. She asks him if Sandeep is really hurt. He testifies that Sandeep is really hurt, he may never walk again. He adds that he doesn’t know if Rishabh wanted to kill Sandeep, but the truth is that Rishabh has committed the accident. Shrishti apologizes to him and runs away from the house. Constables think the doctor is really great that the girl recovered from fracture and went out running. Shrishti informs Preeta that doctor has testified that Sandeep’s injuries are real. Preeta gets worried on knowing this. What will Preeta do next? Keep reading.

Reviewed Rating for Kundali Bhagya 15th October 2021 Written Update Mission Rishabh: 3/5 This rating is solely based on the opinion of the writer. You may post your own take on the show in the comment section below.