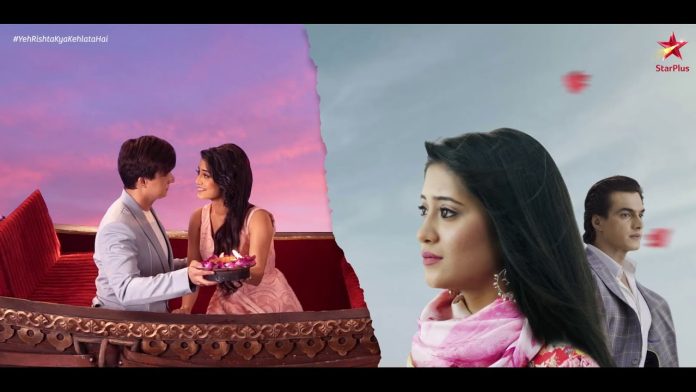 Yeh Rishta New Track 15th October 2021 Written Update The Goenkas watch the CCTV footage of the Pharmacy and realize that it was Mukesh who changed the medicine and they thought Surekha was behind it. Dadi and Suwarna feel guilty that they accused and blamed Surekha for a crime she did not do. Kartik comes and informs Sirat that the federation has told him that Mukesh can go to jail and they will also get him banned from the boxing field but the problem doesn’t get solved as there are still traces of drugs in her blood. This issue can refrain Sirat from playing in the championship. Sirat is worried about bringing back Surekha to the house and wonders if she will forgive all of them. Karwa Chauth festival is going on in the Goenka house and Dadi misses Surekha and feels she has hurt her badly.

Gayu says that despite convincing so much, Surekha is not in the mood to listen. Suwarna asks Akhilesh to go and meet Surekha as she will not break her fast without seeing his face. Sirat asks Suwarna to go with Akhilesh but she says that she doesn’t have the courage to face Surekha. Kartik comes with good and bad news. The good news is that there are no traces of drugs in Sirat’s blood and her reports are normal so she can play the match. Everybody cheers for Sirat but the bad news is that the Asian Championship is today itself. Sirat is shocked.

Dadi tells Kartik that Sirat has kept a fast for Karwachauth. Kartik tries to make Sirat understand that the match is more important than the fast and she should break it for the sake of her dream. Dadi also gives two options to Sirat to either seek an apology from god or break the fast because it’s mandatory to win the match. Kartik is very happy to listen to his Dadi’s words and says love you to her. Kartik asks her to break the fast but Sirat is adamant to break it as it’s her first fast for Karwachauth.

Kartik tries to explain to her that she requires energy from food to fight the match but Sirat says that mental strength is enough to win the match and she has it in huge amounts. Sirat is not afraid as Kartik and her whole family is behind her so she will not faint or back out. Sirat asks Kartik to wish her luck and he does that. Sirat offers sweets to Kartik but Suwarna tells her that Kartik will not eat as he too has kept a fast for her today. Kartik explains to Sirat that it is not necessary that his wife should fast always and so he decided to keep fast and support his wife in today’s match. He says that husbands also need to pray for their wives’ long lives and not just them. Sirat and Kartik hug.

At the Boxing match, the announcer takes Sirat’s name and praises her. Kartik motivates Sirat and tells her that she needs to win the match to prove that she can be defeated by her conspirators. She has to win and become an example for all the girls out there. Sirat is sad as all the members are there to cheer for her but not Surekha. Kartik assures her to fix everything later but right now she needs to concentrate on her match. Sirat moves inside the ring and coach Arvind gives her the final advice. Suwarna is disturbed by Surekha’s words and starts crying. Sirat plays well and wins the first round. Surekha is crying as she misses her family members. Suwarna goes to convince Surekha and tells her that she has come to take her younger sister back with her. Surekha says that she doesn’t have any elder sister and asks her to go away.

Kartik says to Sirat that she is playing well and asks to defeat her competitor in the final round. Suwarna tries to convince Surekha that it was Sirat who found the proof and proved her innocence as she was sure that Surekha cannot do such a thing. Surekha is shocked as she doesn’t like Sirat and why she did so much for her. Suwarna tells Surekha that she is her culprit and she will leave the Goenka house if she promises to come back. Suwarna says that it is an important match for Sirat and not being present there is very disheartening for her and that is why she should come to cheer her. Suwarna also tells Surekha that all the family members are blaming themselves for thinking so bad about her. Sirat gets unconscious and falls to the ground. Kartik encourages her to get up as the referee starts the countdown.

Surekha comes with Suwarna to the boxing match and cheers for Sirat. The Goenkas are shocked as well as happy to see Surekha at the venue. Surekha blackmails Sirat that if she feels that she should come home back then she must win the medal. Kartik tells Sirat that Surekha’s re-entry and the match are all dependent on her now. Sirat is motivated by their words and gets up. The crowd cheers and claps for her. Sirat is ready to fight when the bell rings. Kartik asks her to have some water as she will gain energy. Sirat doesn’t want to break her fast but Kartik says that her match is more important as the whole nation is watching her. Kartik asks her to consider him as her moon and break the fast. He tells her that she cannot betray her country for his long life. Suwarna prays for Sirat.

Sirat is not ready to drink water and says she doesn’t require it. She tells Kartik that Surekha coming to her and her family members cheering for her has given her immense strength and motivation to win the match. Sirat says that she will drink water only after she wins the match. Kartik is angry with her and asks her to stop this foolishness. Sirat promises Kartik that she will ask him to give her water when she really needs it but now she doesn’t require it. Sirat begs Kartik to grant her a chance to show her potential and win the match without drinking water.

Sirat motivates herself as the bell rings and she gets up to fight. Everyone cheers for Sirat but she is too weak to fight. The next day, the whole Goenka family celebrates Karva Chauth together. Kairav informs them that the moon has come up. Arohi starts crying and Kairav insists on taking her out on the lawn. A mysterious lady takes Arohi with her and leaves another kid in her pram. Kartik is shocked to see another kid in Arohi’s place. Sirat is stunned. Keep reading.

Reviewed Rating for Yeh Rishta New Track 15th October 2021 Written Update: 3/5 This rating is solely based on the opinion of the writer. You may post your own take on the show in the comment section below.