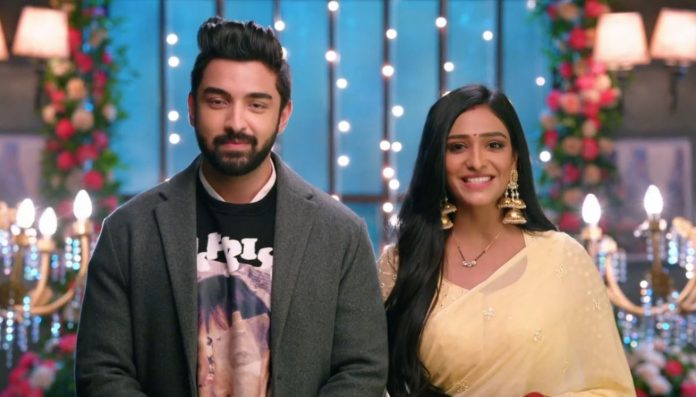 Bhagya Lakshmi 16th October 2021 Written Update Rishi feels love Lakshmi is shocked to see a love band in Rishi’s hand which couples wear. Rishi is disturbed to know that Lakshmi did not like his gift. Neelam’s friends are eager to meet Lakshmi and Virendra says that she must be somewhere around busy in the preparations. Lakshmi is lost in thoughts and does not notice Neelam calling her. Aahana tells Lakshmi that Neelam is calling her and she comes out of her thoughts abruptly. Lakshmi greets the guests warmly and they all praise her decorations and attire.

Lakshmi tells them that they have arranged a designer to help them with the Punjabi attires for the party. The guests are thrilled. Lakshmi says to Virendra that she has some work for 5 minutes and will come back post doing it. Virendra tells her to go. Virendra teases Neelam and calls her Billo Rani. Neelam gets pissed at him and goes away. Aahana laughs at Virendra but he scolds her. Malishka waits for Rishi in a room but he doesn’t come there. Eventually, Malishka goes into his room and tells him that she was tense as she wanted to check if Lakshmi had gone or not.

Rishi tells her that Lakshmi did not like the gift he gave her. Malishka says to Rishi that he should not care for her feelings but she definitely liked the gift he gave her which proves that they will be forever together. Malishka asks Rishi to say I love you 5 times as he did not say it to her for 2 days. Lakshmi plans to change her Dupatta and wear the one she wore during her marriage as it is considered auspicious. In order to remove it, Lakshmi hurts her finger and it bleeds. She hurriedly goes towards her room. Rishi tells I love you 4 times only and pushes Malishka as soon as he sees Lakshmi.

Lakshmi’s finger hurts when she tries to open the door and again bleeds but does not see Rishi and Malishka. Lakshmi enters the room and finds her dupatta missing. Rishi and Malishka hid in the gallery and Lakshmi’s dupatta is stuck in Rishi’s wrist. Lakshmi finds her dupatta near the window but it slips from her hand. She again goes to pick it up when she hurts her leg and sits on the bed. Rishi tries to get rid of the dupatta but is unable to do so. Aahana asks Aayush if he has seen Malishka as Lakshmi has finalized a dress for her too. Aayush pulls Aahana’s legs and she goes away irritated. Shalu observes this and says it is good that God did not give her a brother like him. Aayush irritates and makes fun of Shalu to the core that makes her angry and she decides to teach a lesson to him by complaining to Lakshmi.

Lakshmi picks up the dupatta and finds Rishi and Malishka hiding behind the window. Lakshmi starts crying and says that she is simple but not stupid and she is aware that something is going on between them. Lakshmi says to Rishi that she forgot herself for him and he behaved like that with her. Malishka stops Lakshmi and says that she is low-class and it was her who convinced Rishi to marry her. Lakshmi slaps Malishka for playing with a pious ceremony like marriage and understands that they both are having an affair and that is why she always sees them together in the kitchen, hospital, and now here. Neelam and Karishma enter and Lakshmi asks them if they were aware of Rishi and Malishka’s affair and they hang their heads. Lakshmi realizes that she is made a fool as the whole house except her knew about Rishi and Malishka’s relationship.

Malishka tells Lakshmi that she had enough of her drama and tells her to leave the house when Rishi says that Lakshmi saved him and he will leave her and not Lakshmi. Rishi says to Malishka that he doesn’t need her anymore but only requires Lakshmi. He slaps her and Malishka’s dream breaks. Malishka is shaken to see such a bad dream. Lakshmi feels that her dupatta might have been stuck in an iron pin and goes to get it and Malishka tears it from Rishi’s wrist and throws it to the ground. Lakshmi picks it up and finds it torn and feels that it is inauspicious if the marriage dupatta remains torn and decides to stitch it.

Lakshmi prays to god that no one should come between Rishi and her. Rishi feels bad for Lakshmi but remains silent. Aahana enters the room and asks if she has seen Malishka. Lakshmi tells her to make a call as she might be busy. Malishka becomes alert and tells Rishi that she threw her phone on the bed in anger. Rishi slowly goes and gets Mlaishka’s phone. Aahana calls Malishka and her phone rings but Rishi puts it on silent. Lakshmi and Aahana feel that the phone rang in their room only but ignore it.

Aahana tells Lakshmi that Malishka is not answering her calls and sends her a text. Aahana helps Lakshmi put her marriage dupatta on her head and calls her beautiful. She teases Lakshmi that she is planning to marry Rishi again. Lakshmi says that marriage only happens once and they get tied together for seven births. They both leave and Malishka and Rishi come out of hiding. Malishka says that it was really close and she became suffocated hiding behind the window.

Rishi seems tense and Malishka asks him why he is troubled. Rishi says that he is fine. Malishka goes to get ready in Sonia’s room. Rishi fights his inner conflicts and he is unable to understand why is he getting affected by Lakshmi’s mood or why is he feeling bad if Lakshmi did not like the gift he gave her. Rishi is asking himself why he felt bad when Lakshmi’s dupatta got torn and she became sad. Rishi is going crazy with all these thoughts and feels that he might have fallen for Lakshmi.

Reviewed Rating for Bhagya Lakshmi 16th October 2021 Written Update Rishi feels love: 3/5 This rating is solely based on the opinion of the writer. You may post your own take on the show in the comment section below.