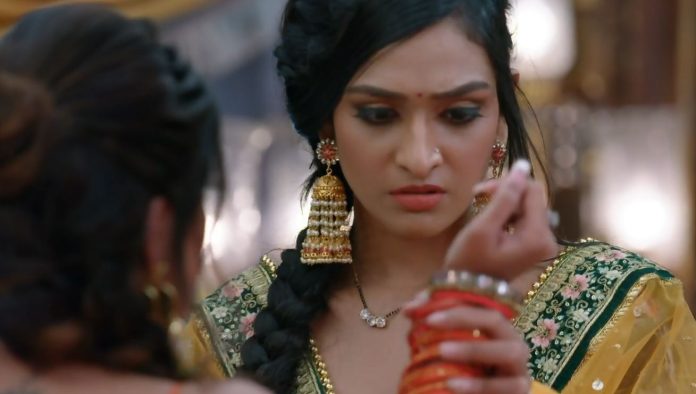 Bhagya Lakshmi 18th October 2021 Preview Update Lakshmi learns Rishi’s truth Lakshmi’s uncle arrives home to meet her. He attends Virender and Neelam’s anniversary party. Lakshmi succeeds to please everyone by her efforts when Sonia and Karishma had laid a series of obstacles for her. Lakshmi doesn’t see Rishi and Malishka confessing love to each other. She also misses to see them sharing a romantic hug.

Rishi seems tense and Malishka asks him why he is troubled. Rishi says that he is fine. Malishka goes to get ready in Sonia’s room. Rishi fights his inner conflicts and he is unable to understand why is he getting affected by Lakshmi’s mood or why is he feeling bad if Lakshmi did not like the gift he gave her. Rishi is asking himself why he felt bad when Lakshmi’s dupatta got torn and she became sad. Rishi is going crazy with all these thoughts and feels that he might have fallen for Lakshmi.

Lakshmi’s uncle finds Rishi dancing with Malishka. He feels they both are not just friends, they have a secret relation hidden from the family. He concludes this when he sees Rishi and Malishka romancing. He worries for Lakshmi’s marriage. He rushes to tell her that Rishi and Malishka are not just friends, but they are into an affair. Lakshmi is shocked to know this. She believes her uncle. She knows that he will never mislead her.

He tells her that Rishi and Malishka are doing wrong, there is something going on between them, its something wrong which should end at once. Lakshmi goes to Malishka and holds her hand to check the love band worn by her. She has seen Rishi wearing the same love band, when he lied to her that its gifted to him by his friend. She knows that Rishi has himself ordered the love bands, and its not for her, but Malishka. She is shocked to learn about Rishi and Malishka’s affair. Rishi and Malishka receive a tense shocker when they get caught by Lakshmi. What will Lakshmi do now? How will Rishi face Lakshmi? Keep reading.

Reviewed Rating for Bhagya Lakshmi 18th October 2021 Preview Update Lakshmi learns Rishi’s truth: 3/5 This rating is solely based on the opinion of the writer. You may post your own take on the show in the comment section below.