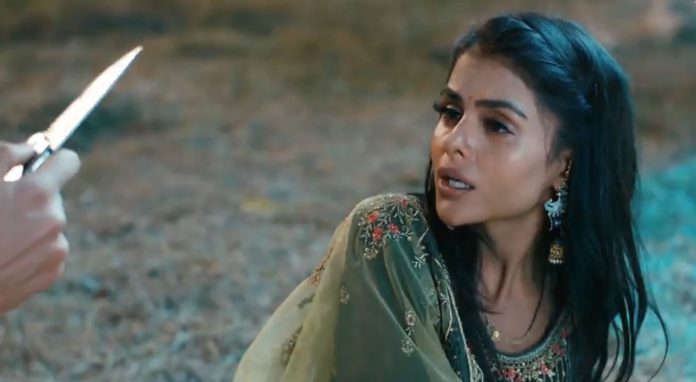 Udaariyaan 18th October 2021 Written Update Tejo abducted Tejo comes across Jass in the Raavan Daahan event. The entire gets busy and celebrate the Dussehra with Candy, while Jasmin intentionally sends Tejo away to meet Jass. Tejo gets a huge shock on seeing Jass back. She runs away from him. She tries to reach Fateh, who grows worried for her seeing her missing from the family group. Tejo shouts to Fateh to get his help, but her voice doesn’t reach him, because of the crowd and noise.

Jass shuts Tejo’s mouth to stop her from shouting again. Jass makes sure that Tejo doesn’t reach Fateh. He takes her away from there with an evil intention. Tejo still tries hard to save herself from Jass. Jass tells her that she has come to attend Raavan Daahan, but the Raavan isn’t killed yet. He adds that he is her Raavan and she is his Sita, he will take her away with him and make her away from her Ram. He tortures Tejo and mishandles her. Tejo cries in a helpless state.

He threatens to kill her. When she tries to escape, he gets her at the point of the knife and brutally injures her arm. The Raavan Daahan carnival turns out to be a huge disaster for Tejo.

Tejo gets abducted by Jass, with the help of Jasmin. Tejo will soon learn that Jass has come back in her life because of Jasmin’s conspiracies. Will Jass reveal Jasmin’s hatred for Tejo after the abduction? How will Fateh find Tejo? What story will Jasmin cook up of Tejo’s disappearance? This twist will mark the end of Jasmin’s evil plans as well, when Tejo’s tolerance and patience gives up and she comes out to Fateh with Jasmin’s entire evil plots. It will be totally interested to watch Jasmin’s doom. Comment your views and keep reading.

Jass plays the dhol while eyeing Tejo in an evil way. Jasmin gives him a signal to come to Tejo and vanish her smile and peace. The entire family stays busy with Candy. Tejo takes Candy to the icecream stall. Fateh and Tejo play with Candy like a happy couple, leaving Jass and Jasmin angered. Gurpreet wishes that Fateh and Tejo have a family, their child that completes their relation. Jasmin wants the family to go away, for her plan to get into action. She fakes an injury to take Fateh with her. She makes Fateh lift her, just to show Tejo her place. She signals Jass to catch Tejo. Jasmin engages Fateh with her. She asks him to take her home. Fateh waits for Tejo. Jasmin asks him to forget Tejo, the family will get her along. Jass misleads Tejo to send her away from the family. He meets Tejo and shocks her.

Tejo’s memories get revived. She gets scared. Fateh asks the family about Tejo, when he doesn’t find her at home. The family asks him the same. Fateh tells that they were going to bring Tejo with them. He grows worried. Tejo asks Jass why did he come back, what is his motive to return. Jass tells that he wants to take his revenge on her. Her phone falls there. Fateh tries to call her. Jass holds Tejo’s hand and frustrates her. He tells her that he is her husband, he will not leave her hand this time.

She asks him to let her go. She threatens to call the police and get him arrested. He tells that nobody will come to save her. She shouts for help. Jass takes her away. A man answers Tejo’s phone and tells Fateh that the phone was fallen on the ground. Fateh worriedly tells the family that he will go and find Tejo. Jasmin asks him to wait for some time, Tejo would be coming home. Jass threatens Tejo. She asks him not to do anything wrong, he will end up in the jail for his crimes.

Jass tells that she didn’t change till now. He asks her not to run away from him. He questions her if she has married Fateh and became the bahu of Virk family. He doesn’t want her to threaten him of the police. He feels confident that he is free from all the blames. He states that Fateh will not come to save her. Tejo tricks Jass and tries to run away from him. Fateh and his siblings look for Tejo, but miss to see her hiding around. Tejo sees Fateh looking for her. She runs to Fateh to seek his help. Jass comes in her way and catches her. He tells her that this time, Fateh can’t catch him.

Tejo boldly fights Jass. Tejo injures her arm to stop her daringness. Tejo lies in pain and weeps. Jass tells Tejo that she is his wife, she belongs to him. She replies that she isn’t his wife now. He tells that he has a right on her, he is her husband, he will not let her go back to Fateh. He adds that he will take her along and keep her like a queen in his palace. She calls him mad. He tells that Fateh can’t become between them. He adds that their marriage was legal, he has a proof to claim her as his wife. He shows the marriage certificate. He shocks her stating that their marriage is still valid, she is his wife, not of Fateh. Jass kidnaps Tejo. Stay tuned.

Reviewed Rating for Udaariyaan 18th October 2021 Written Update Tejo abducted: 3/5 This rating is solely based on the opinion of the writer. You may post your own take on the show in the comment section below.