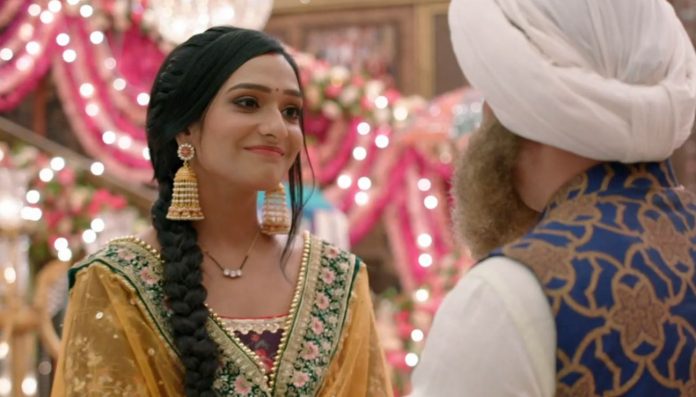 Bhagya Lakshmi 20th October 2021 Written Update Rishi warned Karishma sees the special cake prepared by Lakshmi. She tells Malishka that if the cake gets spoiled, then Lakshmi won’t be having any backup option. She adds that if the cake falls by Lakshmi’s hands, then the anniversary celebrations will stop midway. Malishka tells that she shall go and make the cake fall, till then she will order another cake. On the other hand, Gurucharan warns Rishi against hurting Lakshmi. He tells that he can’t see anyone giving her sorrow. Malishka waits for Karishma, who comes and tells her that she did the work. Lakshmi gets tensed after seeing the spoilt cake. She runs to take help from Malishka. She takes Malishka aside, and happens to see her wearing the love band. Malishka and Rishi get into tension.

Karishma is irritated that Lakshmi becomes successful every time in saving herself. She sees the cake and gets a plan. Malishka asks Karishma if she wants to eat the cake before it is cut. Karishma says that Lakshmi has scored more than Malishka in the anniversary preparations now it’s her turn to go ahead of Lakshmi. Sonia says that Lakshmi has gathered a lot of fans after this feat. Karishma says that she will spoil the cake and make Lakshmi feel that she spoiled it. Sonia is reluctant as she doesnt want to destroy her mom and dad’s special day. Karishma assures her that she will spoil the cake but Malishka will come to the rescue with another cake immediately.

Malishka likes the plan and she tells Karishma to spoil the cake till then she will arrange for the new one. Neha goes running to Rishi and asks him what was he telling about her and Rishi is blank. Shalu comes in between and tells Rishi that Lakshmi was searching for him and forcibly sends him away. Neha realizes that Shalu is jealous of her closeness with Aayush and pledges to make him her boyfriend. Neha sees Aayush and goes towards him but seeing her Aayush runs away. Rishi touches Gurucharan’s feet as he prepares to leave. Virendra goes to meet some important guests and Lakshmi goes to call Shalu and Bani.

Gurucharan tells Rishi that Lakshmi is very innocent and simple and in childhood, he used to fight with her parents because he cannot tolerate seeing Lakshmi in pain. Rishi gets scared but promises to take good care of Lakshmi. Gurucharan bids goodbye to Lakshmi, Shalu, and Bani. Malishka tells Neelam that it is the time of cake cutting and she searches for Virendra. Sonia brings Virendra with her and he agrees to cut the cake. Malishka purposely says that cake is the most important thing at the anniversary party and without it, the party will be spoiled. Lakshmi is asked to get the cake and she goes upstairs to bring it.

Karishma goes up and drops a showpiece to distract Lakshmi and she goes to pick it up. Karishma comes out of the window and drops the cake and runs inside the room. Lakshmi is shocked to see the cake lying on the floor. Karishma comes down and informs Sonia and Malishka that she destroyed the cake making them happy. Lakshmi comes down running and asks Malishka for help and drags her hand. She sees the love band in her hand and is left devastated. Lakshmi remembers Aahana’s words that only a couple wears the love band and also Gurucharan saying her that Rishi and Malishka are not just friends. A friend of Sonia flirts with Shalu and she shouts at him. Aayush is observing everything from far. Sonia comes there and scolds Shalu for speaking rudely with her guest. Aayush drags her from there.

Sonia’s friend says that Shalu flirted with him and she says that such kind of girls search for husbands at big parties and goes away. Rishi comes there and says that a friend of his had gifted the love band so he thought it to give to Malishka because she is single and he thought of ordering new love bands for both of them. Malishka is very sad and starts crying. She excuses herself and Rishi is about to go after her when Lakshmi says that she needs urgent help from him and takes him away. Shalu shouts at Aayush for dragging her and he replies that he only helped her. Shalu says that he has no need to become her friend and goes away in anger.

Shalu again comes back and starts fighting with Aayush. She asks him to stay away from Neha as she is very bad but Aayush tells her that he likes girls around him. Lakshmi takes Rishi inside and talks non-stop. Rishi asks her what happened and she says that he had told her that he will help her when the DJ had not turned up. Rishi says that he will certainly help her and Lakshmi tells him that the cake is spoiled. Lakshmi asks Rishi to keep the guests busy for 30 minutes and she will quickly prepare a sweet dish till then. Rishi suggests to Lakshmi that he will order a cake from the hotel but Lakshmi says that nobody should come to know that the cake is spoiled.

Rishi orders a cake from his friend’s hotel and Lakshmi asks him to put Neelam and Rishi’s photograph on it. Malishka is crying badly and tells Karishma that Rishi ditched her by removing the band because Lakshmi should not get doubt. Karishma tries to pacify her but Malishka is uncontrollable. Karishma finally manages to convince Malishka by telling her that she and Rishi make a cute couple. Malishka asks Lakshmi about the cake and Rishi tells her to wait. Rishi says that his friends want Lakshmi to perform for him. Neelam’s father makes an entry and she greets him. He says that Lakshmi had ordered him to come or else she would not speak to him. Lakshmi goes to touch his feet and he says that girls don’t touch feet in their side and asks her to hug him or just greet him like Neelam. Neelam is shocked to see her father treat Lakshmi as equal to her.

Reviewed Rating for Bhagya Lakshmi 20th October 2021 Written Update Close truth:
3/5 This rating is solely based on the opinion of the writer. You may post your own take on the show in the comment section below.