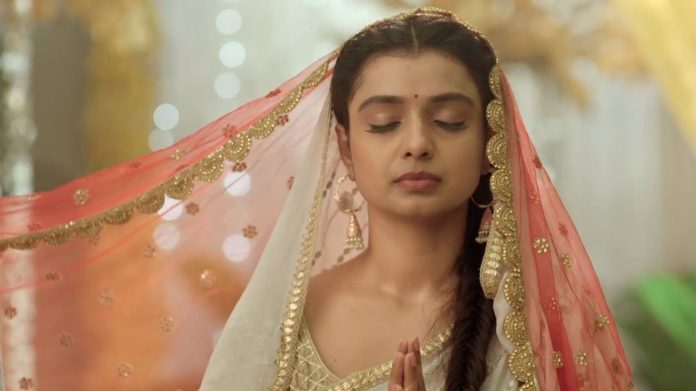 Imlie 21st October 2021 Written Update Malini chides Imlie Imlie is putting oil in pooja diyas and singing a cute wish song (Mata rani’s bhajan). Aprana hears her and smiles. Imlie requests her to sing it with her. Aparna agrees and sings it along with Imlie. Imlie dances while singing it. Whole family arrives hearing it. They too start singing the same bhajan with Imlie and enjoy it with claps. Imlie makes everyone happy and smiles with her cute antics. Imlie asks Pranav to give her his phone and enjoy it with family. Aditya comes there talking to someone on call. He tells the person on the phone that he has solid proof against that minister. Aditya further tells the person that once the story gets published, the minister will not get a place to hide his face.

Nishant jokes that everyone gets Devi Maa’s call and Aditya gets Editor/senior’s call. Imlie asks Aditya to disconnect the call as it’s Devi Maa’s time. Aditya jokingly calls Imlie a small gangster. This makes the whole family laugh. After Aditya disconnects the call, Pankaj asks Aditya if he was saying that some minister is involved with the drug smuggler? Aditya replies yes, he further asks Pankaj to think if a minister is applying poison in the country, what will the new generation learn or do.

Pankaj asks Aditya to involve Imlie too in this story, it will help her in her internship. Malini says to Pankaj that Imlie is busy in navratri preparations. She indirectly calls Imlie careless. Malini says if Imlie will do the internship and navratri preparations together, she may get distracted. Aditya tells Imlie is already helping him in his story. Imlie recalls how Aditya asked her to keep the pendrive containing proof safely. Harish asks Aditya the name of the traitor minister. Aditya tells the minister’s name as Adarsh Kant.

Pranav’s phone rings and he gets tensed if the minister would be calling him. He stops Imlie from touching his phone. Imlie asks him why he is so fast. Pranav apologizes and says he should have kept his phone on silent. Imlie says in her village fast people are called either cheetah or thief. Pranav replies to Imlie in her village all people may be like cheetah or thief only. He explains that he didn’t want to disturb Aditya’s important conversation and thus ran to put his phone on silent.

Aparna says they have a lot of work to do. Pranav thinks the minister is calling him again and again for work. He also thinks till when he will be stuck in Tripathi house. Imlie asks Pranav to spend time with Rupi. Pranav replies he was praying to god for helping him in keeping Rupi happy. Malini calls Pranav sweet. Aparna asks Imlie to give prasad’s invitation to everyone in the colony/society. Pankaj asks her to be careful. Pranav calls the minister and assures him that he will soon bring the proof against him. He thinks no one is leaving him alone to let him steal the pendrive, especially Imlie.

Pranav thinks to win everybody’s trust as soon as possible. He thinks Rupi is an easy target. Pranav gets the idea from Dhruv’s room to win Rupi’s trust by giving her i love you cards. He collides with Imlie, who asks him what he was doing in Dhruv and his wife’s room. Pranav makes an excuse to talk on the phone. He asks Imlie why he is behind him when Aparna gives her some work. Imlie asks him to give Rupi his time and wish him luck. Pranav asks her to keep her luck to herself and hints Imlie that he will take for whatever he came for.

Next, Imlie is seen on a decorated rickshaw inviting everyone to come to her home to get Devi’s Maa’s prasad and blessings. Police tells Imlie that they are here for their duty to give public security during festivals. Imlie says then they could not celebrate any of their festivals properly. She feels bad for them. She also invites police to her home for Devi Maa’s prasad. Imlie tells Aparna that she invited everyone. Malini tells Imlie they have made limited prasad for colony people. Imlie says they can fill everyone’s stomach from Devi’s prasad’s one piece only.

Imlie asks Malini if she took her medicines. Malini replies no. Everyone asks Malini to take her medicines on time. Rupi shows the card Pranav gave her. Malini calls it sweet. Imlie recalls that these cards were kept in Dhruv’s room. She thinks Pranav might have stolen the cards from Dhruv’s room. Radha compares Rupi and the card’s beauty. Imlie too calls the card cute. Rupi says she is surprised as Pranav was not this much romantic earlier. She thinks Paranav is changing and feels happy with it. Imlie feels tensed for Rupi.

Imlie discuss Pranav and Rupi’s situation with Meethi. Meethi says Pranav seems to be a clever and evil person. She explains Imlie to tell Rupi whatever she thinks about Pranav. Imlie says she cannot break Rupi’s hope. Meethi says to Imlie she would never forgive herself if her doubt about Pranav will come out right in future. Rupi sees her and Pranav’s photo frame and cards given by the latter. Imlie comes there and tells her she wants to talk to her. Rupi asks her not to be formal and clearly say anything.

Imlie tells she saw Pranav getting out of Dhruv’s room and the cards he gave her were kept in that room. She also tells Rupi that Pranav may have not purchased these cards. Imlie further says to Rupi that Pranav is not trying as much as he should to win her trust and love. In the next episode, Malini will ask Imlie why she is trying to provoke Rupi against Pranav. Imlie will reply to her that Pranav deceived Rupi badly in the past. Malini will say to Imlie that she too lied and deceived her and Tripathis in the past. She will further ask Imlie who she is to judge Pranav.

Reviewed Rating for Imlie 21st October 2021 Written Update Malini chides Imlie:
3/5 This rating is solely based on the opinion of the writer. You may post your own take on the show in the comment section below.