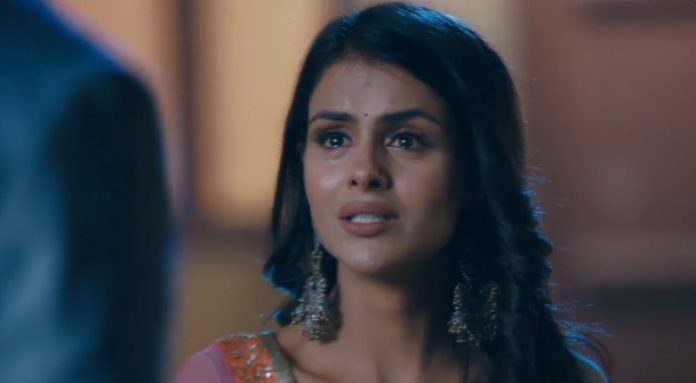 Udaariyaan 23rd October 2021 Written Update Grave danger Tejo gets troubled when Jass plays a provoking drama to make Sandhus react and beat him up. Jass gets Sandhus arrested to weaken Tejo further. Rupy advises Tejo to call Fateh as soon as possible to take his help. Tejo agrees to do so, being with no option. Jass informs Jasmin about the Sandhus’ arrest. Jasmin isn’t affected for anyone. Jass knows that Tejo will call up Fateh to seek his help. Jasmin also knows this well that Tejo will reach out to Fateh and Virk family to rescue Sandhus.

Jass and Jasmin make a plan to keep Fateh out of Tejo’s react. Jasmin assures Jass that she will not let Fateh reach Tejo in any way. Jasmin tells Fateh that she is also worried for Tejo, but now the latter is safe in her family’s house. She asks Fateh to spend time with her, and cover up for the lost days which passed in just tension. Fateh is just worried for Tejo. Jasmin keeps him engaged by planning a surprise romantic date. Fateh stays lost in Tejo’s thoughts. He isn’t interested in romancing Jasmin, being occupied with Tejo’s worries. Jasmin dances for him and gets close to him. She makes sure that he doesn’t have his phone.

Fateh wants to go and check Tejo once, but Jasmin doesn’t allow him to move. Tejo gets troubled by Jass, who enters her house and forces her to accept him. Tejo runs from Jass and gets her phone. She calls up Fateh to inform him the situational tension. Fateh doesn’t see Tejo’s call, when his phone is lying somewhere away. Jasmin hugs Fateh and doesn’t let him go. Tejo calls him again. Jass reaches Tejo and finds her calling Fateh. Jass stops her. Tejo gets scared seeing Jass. What evil will Jass plan next? Will Fateh listen to his heart and understand Tejo’s call for him? Keep reading.

Earlier in the show, The Sandhu men lose control and beat up Jass. Tejo tries hard to stop them. The police arrives there and finds the fight going on. Jass cries out to file a complaint against Sandhu men. The Sandhus complain about Jass, but the inspector believes Jass. Jass tells that Sandhus have kidnapped his wife, they aren’t sending Tejo with him. Jass shows the marriage certificate. Inspector tells that Jass didn’t beat them, but the family had beaten Jass. The family defends themselves. Jass asks the Inspector to arrest Sandhu men. Sandhu men get arrested. Tejo and Sandhu women cry seeing this shocking sight. Jass has his last laugh.

Tejo is helpless to tolerate Jass until she finds her lost phone and calls up Fateh. She looks for her phone. She doesn’t remember where she left the phone during the chaos when the Sandhu men got arrested. Tejo doesn’t like Jass in the house, but he deliberately angers her by demanding like a troubling son-in-law. Satti, Bebe and Lovely also tolerate him for Tejo’s sake. They don’t want Jass to hurt Tejo in the absence of the Sandhu men. Satti tells Tejo that they will feed Jass a lot and keep him in control. Jass troubles Tejo a lot and asks her to serve him ghee and curry.

He asks her to serve her love to her husband. Tejo avoids him. He likes to give her orders. She tells him that she isn’t scared of his threatening, no law can help him once she files a complaint against him. He tells her that she can do anything but after six days, until then he is her husband and will do anything he wants. He stays relaxed. Tejo wants Fateh’s help for her family. Fateh and Khushbeer are worried for Tejo. Fateh feels he lost Tejo’s friendship because he broke her heart. He misses her and also worries for her.

Khushbeer is worried for Tejo, knowing Jass can reach Sandhu house and trouble her. He tells Gurpreet that he is really worried for Tejo. He wants Jass behind the bars. He doesn’t know that Jass has sent Sandhu men to the jail. Gurpreet pacifies him. Fateh stays restless for Tejo. Jasmin comes up with a plan of distraction for Fateh. She doesn’t want him to think of Tejo all the time. She comes up with a dance performance with a romance dose for Fateh to woo him. Fateh is still thinking of Tejo.

Jass continues to trouble Tejo. Jass demands some drinks and nuts. He tells her that she would have shared drinks with Fateh as well. Tejo gets the drinks for Jass. She asks him not to cross his limits and just go to sleep. Jass refuses to go. He sits drinking and asks Tejo to spend time with her. He forces her to sit with him. Tejo tells him that he isn’t her husband, but just a fraud. He talks dirty about Tejo and Fateh. Tejo angrily throws the drink on his face. She goes to find the phone, until the family stops Jass. Tejo finally finds her phone to call Fateh. Tejo calls Fateh, who is with Jasmin, and away from his phone. Tejo wants him to answer once.

Jass stops Tejo from calling Fateh and Khushbeer again. He tells her that Fateh would be resting in Jasmin’s arms. He jokes and tells Tejo that her sister Jasmin is very cunning. Tejo tries to run away and pushes him. Jasmin fools Fateh and tells him that they shall marry soon for Tejo’s sake. Fateh agrees to marry her just to get Tejo rid of Jass. He shares a romantic moment with Jasmin. He tells her that he will sort everything soon. Jasmin hugs him. Khushbeer gets depressed that he couldn’t stop Tejo from leaving. He hurts himself in anger that he failed to protect his daughter. Fateh reaches Khushbeer and consoles him. He asks Khushbeer to have his medicines on time at least for Tejo’s sake. Fateh too wishes that Tejo didn’t leave the house in this manner.

Tejo fails to contact Fateh. Jass poses more problems for her when she tries to run out of the house to get help from the neighbors. Jass locks the gate and tells her that he can’t permit her to go out at night. He asks her to be his good wife and come with him to her room. The family tries to teach him limits, but he leaves them scared by attacking Dilraj. Jass tells Tejo that its their wedding night which will be completing today, since he had left her on the day of their wedding. He apologizes for being bad to her before. He asks Tejo to love her husband.

Tejo is left shocked and feels threatened by Jass. Fateh checks Tejo’s missed calls and regrets. He calls her back and doesn’t get through. A worried Fateh rushes to Sandhu house, only to find Tejo threatened by Jass. He knows Tejo is strong enough to save herself. Tejo takes a big step to protect her dignity and threatens Jass that she can take his life if he dares touch her. What will happen next? Keep reading.

Reviewed Rating for Udaariyaan 23rd October 2021 Written Update Grave danger: 2/5 This rating is solely based on the opinion of the writer. You may post your own take on the show in the comment section below.