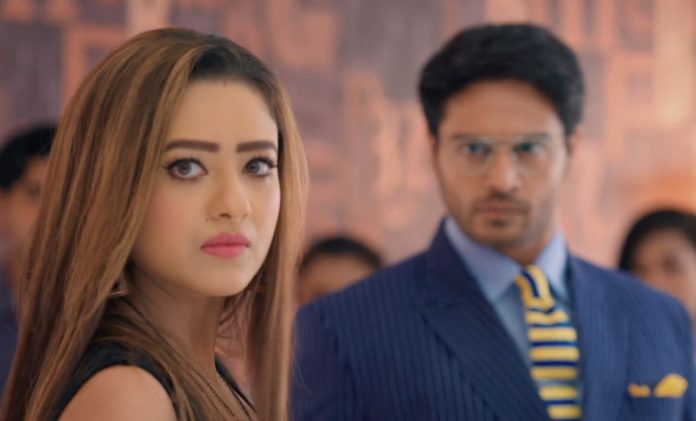 Anupama 25th October 2021 Written Update Kavya fired Nandini wishes Anupama a good morning. She asks Anupama is everyone still asleep. Anupama replies yes, as everyone got tired the day before. Nandini says she is going to meet Samar. Anuapma asks Nandini’s help and asks if she will serve breakfast to everyone. She also tells Nandini that she may have to serve food to everyone’s rooms as nobody will come out of their rooms.

Nandini tells Anupama that she did nothing wrong and she is right. Anupama tells Nandini that she is right but not happy. She explains to Nandini that she may be right but standing against our own family hurts. Anupama asks Nandini to inform Baa that she can come out of the room as she will not see her face now. She further requests Nandini to anyhow make Baa eat food and have her medicines. Before leaving for office Anupama prays to god and Kavya asks her to accompany her to office. Both of them leave and Nandini wishes Kavya doesn’t create trouble for Anupama in office.

At the office, Anupama and Anuj feel awkward about last night. Anupama asks Anuj to not worry as she is fine. She further tells him everybody and everything will get fine with time. Kavya interrupts them. Anuj appreciates her for showing interest in business. But he also asks her to get either permission or appointment before coming to his cabin. Kavya apologizes to Anuj and tells him that she was excited to share her new ideas. Anuj says right now he is busy and she should wait. He further tells Kavya that she should first discuss her ideas with Anupama as she is the project head and then come to him.

Kavya comes out of the cabin and recalls how Vanraj got angry on learning that she will work under Anupama. At the shah’s cafe, some young male customers discuss that Anupama has a boyfriend named Anuj Kapadia. They further discuss that initially Vanraj had an affair with his colleague Kavya, then Samar fell for Nandini who is elder to him and now Anupama made a boyfriend. All this infuriates Baa and Vanraj. Baa tells Vanraj that right now people are talking behind their back, and in future will spit on them in the face.

Next, Kavya is seen giving ideas for online advertising for their project. Anupama and Anuj praise Kavay’s idea. Anuj asks Anupama she is not looking excited for Kavya’s idea. He asks her to be open about her opinion. Anupama says that most of the old-age people and housewife’s use old style phones. They use newspapers and see boards to purchase products as they have fear of fraud in online transactions. Anuj agrees to Anupma’s point and asks Kavya to re-work her idea/plan and incorporate Anupma’s points in it. Anupama apologizes to Kavya.

Anuj asks Anupama to prepare for a video conference. They sit aside for the video conference. Kavya recalls Vanraj’s words that she signed Anuj’s job for her own humiliation. She leaves Anuj’s cabin and again recalls that Vanraj earlier said that Anuj is Anuapma’s puppet. Anuj notices Kavya leaving. She gets frustrated and badmouth Anupama in front of the office staff. Staff stare at her and she continues shouting. She tells everyone that Anuj made Anupama the project even when she doesn’t have any qualification. Staff asks her to not talk ill about Anuj. Some of the staff favors Kavya’s words.

Kavya reveals to everyone that Anuj and Anupama meet each other at each other’s home. She also tells everyone that Anuj and Anupama won the best jodi award in Navratri Pandal. Kavya stops on learning that Anuj is standing behind her. Anuj asks her why she stopped talking. Kavya apologizes to Anuj and asks him to forgive her, taking it as her first and last mistake. Anuj reminds Kavya of the terms and conditions he kept in front of her while he gave her the job in his company.

Anuj says to Kavya that Anupama made a fresh start with her after whatever she did with her in the past. He asks Kavya to see what she did with him and Anupama, and humiliates them in front of the whole staff. Anuj tells Kavya that Baa is better than her as what she did was because of her orthodox thinking. He further asks Kavya why she did all this even after being a modern woman. He says she humiliated Anupama without any reason. Anuj fires Kavya. Kavya requests Anuj to not fire her on her first day of job as this will affect her reputation in the market or society.

Anuj says to Kavya that she didn’t think about his and Anupama’s reputation before blurting rubbish about them in front of the whole staff. Kavya requests Anupama to explain to Anuj that they need this job seeing their house’s financial condition. Anupama replies to Kavya that she would have talked to Anuj if the latter would not have involved Anuj in between her ill talk. She tells Kavya she cannot forgive her humiliating Anuj. Anupama explains to Kavya that many women want to be independent but they don’t even get a chance. She further explains to Kavya that she lost her chance by humiliating the person who gave her the chance to rise in her professional life.

Anuj interrupts in between and asks Kavya to leave. Frustrated, Kavya insults Anuj by saying that he became a hero in Anupama’s eyes by firing her from the job. She even insults Anupama by saying that she impresses Vanraj at home and Anuj at office by her cooking, knowledge and sacrificing skills. She humiliates Anupama more by saying that she used her brains to get her and Vanraj to fight at home and be her boss in office. Anupama gets angry at Kavya for calling Anuj her puppet. She asks Kavya to leave, otherwise she will slap her. Kavya humilates Anuj for keeping the less educated Anupama as project head. She warns employees that Anupama will get their company in loss.

Anuj and Anupama think that Kavya will tell the family everything at home in her own words and increase their anger. Kavya cries crocodile tears in Vanraj’s arms in the cafe. Anuj asks Anupama to have chocolate milk to calm her mood. She drinks it and Anuj tells that they had to visit a site in Ahmedabad’s outskirts. Anupama agrees to it and asks Anuj to treat as any other employee. She leaves for home and Anuj fears that shahs will make an issue of Kavya getting fired.

In the next episode, Vanraj will get angry at Anupama and call her cheap. Anupama will ask Vanraj to send her the voice notes of what he wants to say to her instead of increasing his bp. Next day, she will go for a site visit with Anuj in front of Vanraj. Anupama and Anuj will get stuck in a temple, where the former will ask the latter why he didn’t get married till now.

Reviewed Rating for Anupama 25th October 2021 Written Update Kavya fired: 5/5 This rating is solely based on the opinion of the writer. You may post your own take on the show in the comment section below.