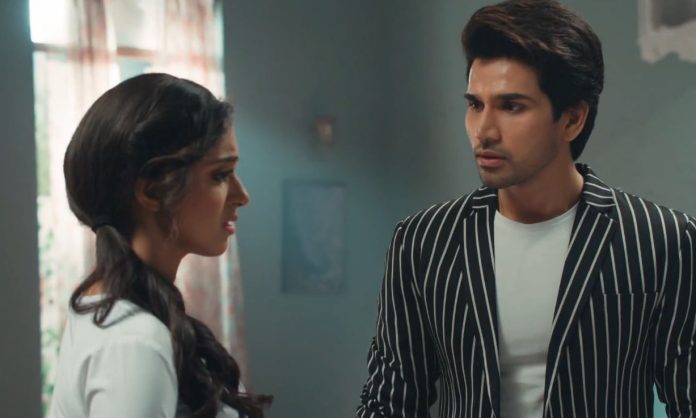 Yeh Hai Chahatein 26th October 2021 Written Update Prisha confronts Inspector Chautala secretly informs Armaan about Prisha’s pregnancy. She tells him that Prisha fainted and the prison doctor confirmed her pregnancy. Armaan gets scared that he can’t let Prisha be with Rudra anymore. Inspector Chautla tells Armaan that Rudra has enough evidence to help Prisha. Armaan thinks to not let Prisha reach court. Both Armaan and Inspector Chautala plan to kidnap Prisha and prove her dead in front of everyone. Armaan comes out of his flashback. He tells Prisha he kidnapped her because she was pregnant and got sentenced to 20 years of life. He tries making Prisha believe that he wanted a good life for her unborn child.

Prisha gets angry at Armaan for kidnapping her. She tells him that Rudra would have got her out of prison. Armaan asks Prisha what proof Rudra had to get her free from prison. Prisha says she can’t tell him about the proof. Armaan asks Prisha if Rudra had the makeup artist Sunil as the witness. Anvi hears and sees the news of Prisha’s death from behind Digvijay. She gets uncontrollable and runs to Saaransh. Anvi reaches Saaransh and tells him that Prisha is dead. She tells Sharda that she saw it in the news. Digvijay confirms it. Rudra returns and Sharda questions him about Prisha’s death news.

Sharda asks GPS, Rudra and Vasudha about Prisha. Rudra tells Sharda that Prisha is more with them. Sharda shouts and cries profusely. Anvi and Saaransh cries hugging Rudra. Prisha asks Armaan how he knew about Sanya’s make-up artist. Armaan tells Prisha that Sunil was not seen entering Sanya’s room in CCTV footage. There was no solid proof to prove her innocence. Prisha asks Armaan not to take tension for her as Rudra will find out about Sunil.

Armaan tells Prisha that Sunil is either missing or dead. He also says to Prisha that Rudra couldn’t have done anything. He asks her to think about her unborn child forgetting everyone. He advises her to stay hidden with him for sometime. Armaan makes Prisha agree to his words using her emotions for her unborn child. Prisha thinks to inform Rudra about her pregnancy but stops thinking that Rudra may fail to prove her innocence. She thinks she can’t let her child take birth in prison.

On the other side, Rudra recalls his moments with Prisha and cries profusely. He recalls his marriage and last Karwachauth with Prisha. Rudra looks at Prisha’s picture and asks what happened. Saaransh comes there and asks for Prisha. He asks Rudra will Prisha never return. Rudra explains to Saaransh that Prisha is in their hearts. He asks Saaransh to pray to god for Prisha’s happiness. Prisha on the other side too recalls moments with Rudra and Saaransh and cries.

She thinks that she can’t live without Rudra and Saaransh. Prisha thinks to inform Rudra about her pregnancy. She sees goons outside her room and uses the window to reach Rudra. Khuranas, Srinivasans and Thakurs perform pooja for Prisha. Rudra refuses to believe that Prisha is dead. He asks everyone to remove the garland from Prisha’s photo frame. Prisha sees Rudra and her family breaking down and cries. Rudra gets angry and Prisha thinks to meet Rudra after Digvijay goes from there. Digvijay tells everyone that Armaan is busy with Sanya’s last rites and memories and failed to come for Prisha’s last rites.

He further tells Rudra if Prisha would have been alive, she would have been suffering in prison for Sanya’s murder. Rudra gets angry at Digvijay for calling Prisha a murderer. He accuses Digvijay and Armaan for entering his family and ruining it. He says that Prisha didn’t kill Sanya and he had proof of Sunil being present there at the same hotel. Inspector Chautla reaches there and tells Rudra that Sunil as a witness is not enough to prove Prisha’s innocence. She tells that Sunil is missing. Rudra asks Inspector Chautala how she came to know about Sunil Makeup artist as he didn’t tell her about it.

Prisha gets shocked on hearing this. She thinks Armaan was right that she can’t tell Rudra that she is alive as otherwise her child will take birth in Jail. Prisha feels sorry that she cannot reveal her being alive to Rudra for the sake of their upcoming child. Prisha returns to Armaan and stops him from scolding his goons for letting Prisha go. Prisha tells Armaan that she is ready to go Abroad with him.

In the next episode, Armaan will say that Prisha Rudraksh Khurana is dead for the world now and a new Prisha will take birth now. Rudra will be seen badly hurt without Prisha. A woman will be seen talking to Mishka in prison saying that she and Sunil got trapped behind Sanya’s murder who is still alive. Mishka will think of using this big news. Prisha will be seen thinking that she won Armaan’s trust and now she will find out about the real culprit.

Reviewed Rating for Yeh Hai Chahatein 26th October 2021 Written Update Prisha confronts: 3/5 This rating is solely based on the opinion of the writer. You may post your own take on the show in the comment section below.