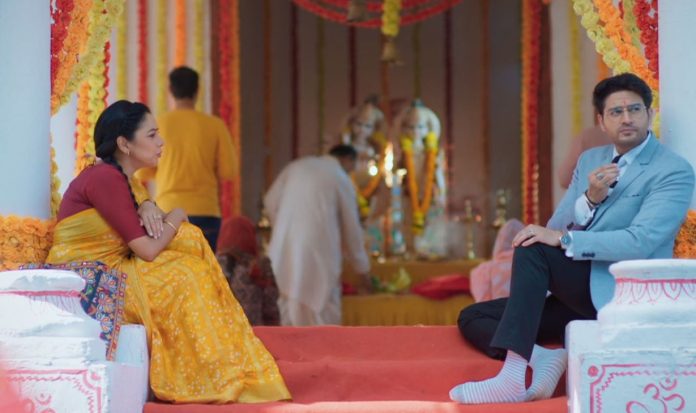 Anupama 26th October 2021 Written Update Unthinkable Anu Anupama returns home. Vanraj and Kavya come in her way. The former asks Anupama, did she show her reality and came to her level. He further asks Anupama, she initially hired his wife (Kavya) for a job and then fired her in just one day. He calls Anupama a cheap, low-level and rude woman. Vanraj asks Anupama are his words pricking her. He says he hasn’t even started. Anupama takes out the cotton from her ears. This angers and shocks Baa, Vanraj and Kavya.

Anupama asks Vanraj, did he finish what he wanted to say. She tells Vanraj that she has got fed up with his same words/dialogues again and again. She apologizes to him saying that hearing the same thing has gone boring. Anupama asks Vanraj to send voice-notes to her instead. She starts leaving but Vanraj grabs her hand to stop her. Anupama in anger pushes Vanraj and Samar saves the latter from falling. She tells Vanraj she will push him again if he tries touching her or raising his hand on her.

Anupama asks Vanraj to not forget sending the next day’s voice note and challenges him that she will anyhow go with Anuj for work the next day. She says to Vanraj to not come secretly behind her by hiding in Anuj’s car. Bapuji praises Anupama’s voice notes ideas. He advises Baa, Vanraj and Kavya to try voice notes ideas for their ill words and taunts. Everyone leaves, Kavya says Bapuji didn’t say anything to Anupama and instead left taunting Baa, Vanraj and her.

Vanraj gets angry at Kavya for getting humiliated by Anuj and Anuapma. Bapuji asks Anupama not to get habitual of bearing pain or hearing taunts. Bapuji feels bad that he is not able to support her as much as it is required. Anupama tells Bapuji that he is giving her the strength to fight taunts and evil words. She tells him that it is because of his support and belief in her that she can reply back confidently to evil people’s ill words. Anupama says to Bapuji that she was going to ask his permission for going out with Anuj for work but due to drama she wasn’t able to.

Bapuji says to Anupama that he understands her and has full faith in her. He further tells Anupama that he is going for satsang, where he will pray that she has to no more prove herself to everyone. Bapuji leaves and Anuapama prays to god to do something so that everyday’s drama gets finished. Next morning, Anupama visits the temple and prays for the well being of her family and kids. In the temple, Anupama meets Akshara where they discuss about everybody wanting love and family only. Both of them get flashbacks of ill treatment from their respective families.

They discuss a person cannot get anything easily, as family is to be made by efforts and love. Akshara and Anupama make a wish through one family card. They wish that their family and family’s love remains maintained. Anupama tells Akshara that it’s good to love family full heartedly but one should love himself/herself too at least a little. She advises Akshara to stand for herself too. Akshara feels overwhelmed to meet Anupama and feels affinity from her.

Both Anupama and Akshara decide to meet each other in future and showcase each other’s talent. They wish the best for each other. Anuj reaches Shah house to pick up Anupama. Vanraj doesn’t let Anupam get outside from the main door. He warns Anupama that he will not allow her to return to Shah house if today she goes with Anuj. Anupama recalls Bapuji’s advice. She climbs the wall, gets outside and sits in Anuj’s car. Neighbors call Anupama cheap. Angry Vanraj goes inside. Kavya gets angry at Baa for not scolding Anupama.

Angry and instigated Baa thinks to scold Anupama badly after her return. Anuj takes Anupama to the temple where he used to send charity. He tells Anupama about his wish to come to this temple with his partner. Both Anupama and Anuj sit there for some time. Anuj reminisce his moments with his parents in this temple and tells Anupama about it. Some women in the temple praise Anuj for being handsome. They wish to get a life partner like Anuj. Anupama laughs at those women’s words.

Anuj feels shy in front of Anuapma. Anupama asks Anuj why he didn’t get married till now. Anuj. In the next episode, Anuj will ask Anupama why don’t she get married again if she thinks that everyone needs a life partner. Anupama and Anuj might meet an accident in bad weather. Everyone at Shah house will be seen waiting for Anupama to return, and start thinking wrong about Anupama. Keep reading.

Reviewed Rating for Anupama 26th October 2021 Written Update Unthinkable Anu: 5/5 This rating is solely based on the opinion of the writer. You may post your own take on the show in the comment section below.