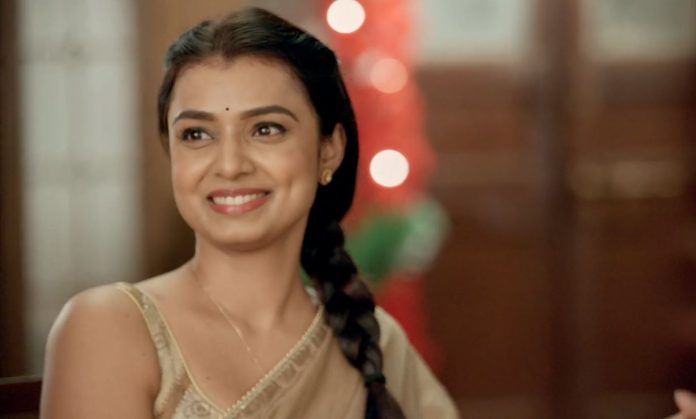 Imlie 29th October 2021 Written Update Malini’s secret plan All Tripathis are seen ready with each other’s partners to play dandiya. Malini goes and stands with Aditya. Imlie from behind tells Malini that once again she forgot her place. Malini asks Imlie what she means? Imlie takes Malini aside and asks her to sit and enjoy for baby’s safety. Aparna supports Imlie and Malini to rest and enjoy. Malini agrees but feels angry. Anu asks Aparna that their servants are crossing their limits. She insults Sundar for dancing with family members.

Aditya stops Sundar from leaving. He tells Anu that Sundar is just like his brother Nishant for him. He instead insults Anu for being an outsider and attending his family function without invitation. This angers Malini and Anu but they stay quiet. Nishant plays a song for Sundar. Everyone dances with their partners. Seeing Imlie playing and enjoying dandiya with Aditya angers Malini more. Anu’s anger gets increased and she goes to stop Imlie and Aditya but Aparna stops her with her dandiya.

Malini gets shocked seeing everyone stopping Anu from reaching Aditya and Imlie. Anu finds it difficult to get out of the Tripathi family circle. She with force gets out of the circle to hit Aditya bit Imlie stops her. Anu’s hand gets hurt. Everyone gets shocked. Imlie asks Anu if her weak hands could handle wooden dandiya. She goes to bring another dandiya but comes back with two stick shaped balloons. Some of the family members laugh at this. Imlie handover stick shaped balloons to Anu and says her weak hands can handle it.

Everyone laughs and Anu bursts the balloon and leaves. Malini too leaves from there. Tripathis leave Imlie and Aditya alone. Dev goss to meet crying Malini. Malini asks Dev to say nothing as his favourite daughter got acceptance in her in-laws house. Dev tells Malini that within months she will realise how wrong she and her thinking is. He explains to Malini that a person can fight for themselves till they become a parent. Dev further explains to Malini that once she will become a mother her priorities will change.

He will explain to Malini that she will never be able to hate her child for even his/her wrong doing, he too can’t hate her. Dev tells Malini that she can hate him but he can’t. He asks Malini to not commit mistakes like him. Dev further explains to Malini that in her wish to make place in Aditya’s heart, she is losing her real self. He asks Malini to become like she used to be in the past for her upcoming child. Malini asks Dev if she failed to become like old Malini? Dev promises Malini to help her in it.

Aditya and Imlie stops dancing and thinks where whole family went? Nishant and Rupi with other family members kidnap Imlie and Aditya. They bring them near Aditya’s room. Aparna tells Imlie that she wants to do her “Griha Pravesh” in Aditya’s room as she failed to perform it earlier in Tripathi house. This behavior and gestire of Aparna and whole family surprises Imlie. While Anu gets angry with it. Harish thanks Imlje for always respecting the Tripathi family. Aparna apologizes to Imlie on the whole family’s behalf gir their past rude and ill behaviour with her.

Anu thinks its good that Malini didn’t stop to see Tripathis accepting Imlie as their daughter-in-law. She thinks Malini’s heart would have broken seeing all this. Malini stops Tripathis from behind. Anu thinks Malini have found some idea no stop Imlie from taking her place. Aparna asks Malini why she stopped the ritual in between. Malini says to Imlie the day she was waiting for came. She tells Imlie that she is happy for her. She gets emotional and ask Aparna if she can perform her sister’s (Imlie’s) aarti?

This behavior shocks everyone. Malini says she wants to welcome Imlie in Aditya’s room. Aparna gets emotional and asks Malini if she really wants to welcome Imlie in Aditya’s room? Harish asks Imlie to see that she has both her parents and in-laws blessings today. He himself blesses her by saying “Saubhagyavati Bhava”. Anu tries to stop Malini from what she is doing. Dev asks her to get back and let Malini do what she is doing.

Aparna asks Malini to take pooja thali from her. Aditya stops Aparna and says that since many days Imlie was yearning for her blessings. He further says that Imie struggled a lot for this day to arrive. Aditya asks everyone to let lmlie decide by whom she wants to get welcomed in his room. Malini says she understands that it should be Imlie’s decision. She tries to make Imlie and everyone believe that now she realised her mistake. In front of everyone, Malini thanks Dev for making her realize that her upcoming baby is her priority. She tells everyone that she just wants her child to live happily in a big family which she never got to.

Imlie says she chooses the upcoming child’s happiness. Anu gets confused with Malini’s changed behavior. Malini performs Imlie’s aarti. She congratulates Imlie and Aditya. Imlie performs her “Griha Pravesh ” rituals. Flowers fall on Aditya and Imlie when they enter their room together. Angry Anu leaves from there. After sometime Malini is seen talking to lmlie . She tells Imlie that for some time her taste changed. Malini tells Imlie that now she and her unborn child love eating lmlie. Imlie tells Malini that the Imlie she is eating is fake. Malini says the shopkeeper deceived her. Imlie replies to Malini that she can deceive everyone but she (Imlie) will not get deceived now.

In the next episode, Malini will reveal her new plan to Anu that she will defeat Imlie by becoming a good girl in Tripathis eyes. She will tell Anu that she is going to do something after which Aditya and his family will never forgive lmlie. Imlie will tell Aditya that she can’t live in his room till she feels that they trust each other fully.

Reviewed Rating for Imlie 29th October 2021 Written Update Malini’s secret plan: 3/5 This rating is solely based on the opinion of the writer. You may post your own take on the show in the comment section below.