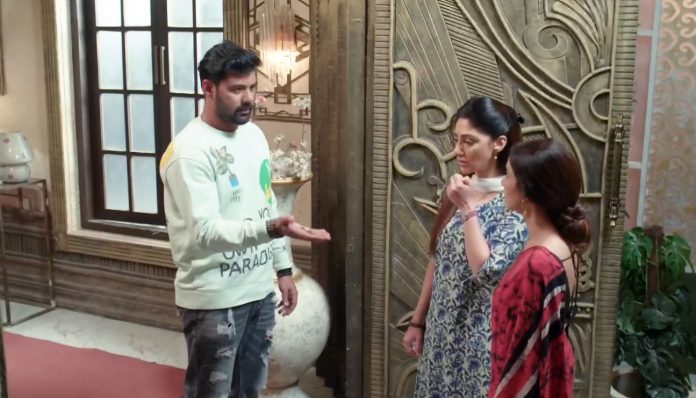 Kumkum Bhagya 2nd November 2021 Written Update Abhi rocks Ranbir confronts Rhea for her confession that she loves him. She admits that she loves him, but adds that she didn’t say that she wants to get him. She acts dedicated and loyal towards her husband Siddharth. Ranbir asks her to stop it and not making things odd in their relations. Rhea deliberately falls into Ranbir’s arms, just to show Prachi. Prachi happens to see them together. On the other hand, Pragya proves Abhi innocent and brings him home. Abhi confronts Aaliya and Tanu for still working with Gaurav against Pragya. He tells Tanu that Pragya’s enemies are his enemies. He removes Tanu’s mangalsutra and shocks her.

He further adds that she has no right to wear the mangalsutra. He tells that just Pragya has a right to wear it, since she is the one who has the right on him. Tanu is left in shock, and even Aaliya can’t believe Abhi’s shocking move. Abhi gets them to their right place, knowing they had put him at stake just to take their revenge on Pragya. He reminds that he had earlier warned them to stay away from Gaurav. Pragya wants Abhi to oust Aaliya and Tanu from the house.

Earlier in the show, Rhea tells Ranbir that the entire Kohli family will be embarrassed because of his decision, because he knows the truth, and still he is turning blind towards it. Ranbir calls it enough. He tells Rhea that she is crossing her limits. She tells that she didn’t cross her limits, he isn’t aware of what it actually means. She tells him that she can do anything for her true love. She shocks him by professing love to him.

Gaurav tells Aaliya that Abhi isn’t getting punished for being a culprit, but because of his innocence. He is getting punished due to Pragya’s rigid decision. He asks Aaliya to wait for some time and then see how the judge punishes Abhi by declaring the verdict. He tells that they shall see if Abhi gets an imprisonment or death sentence. He doesn’t think anyone can save Abhi now. Aaliya gets worried for her brother, when she finds the judge declaring Abhi guilty. She wants to stop the judge from declaring the verdict.

Abhi gets blamed in the court that he planned the building collision just to get a hefty amount from the insurance company for his wife Pragya. Abhi tells the court that Gaurav is directly involved in the case. He tells that Pragya isn’t here, but she will be here soon. Judge just wants to question Abhi, not anyone else. He asks Abhi not to mislead the court. He tells that its an open and shut case, he is involved in the unintentional death of six people. The judge wants to punish him.

Aaliya asks Gaurav to give the proof to the court and save Abhi. He tells that he will not give any proof, Abhi will get punished for being Pragya’s husband. He asks Aaliya to wait till the verdict is announced. He leaves from there. Pragya comes in time and stops the judge from passing the verdict against Abhi. She tells the judge that her husband is innocent. She apologizes for coming late. She tells that she was gathering the proof for her husband’s innocence. Aaliya is relieved that her brother will get saved.

Pragya tells the court that the contractor Subhash is the culprit. Aaliya thinks what proof will Pragya show up when Gaurav has refused to her. Pragya tells that she wants to call Santosh in the court, he is Subhash’s cousin. The judge permits her to call her witness and prove whatever she wants to give a new direction to the case. Santosh becomes a witness in Abhi’s favor. He tells that Abhi didn’t give any such order to break the wall. He adds that Gaurav had come there after Abhi left, and spoke to Subhash.

The lawyer asks her not to waste the court’s time. Pragya tells that Gaurav had transferred money to Subhash, she has the cctv footage and also the recording against Subhash. She asks the judge to check the recording of Subhash and Gaurav’s conversation. Santosh tells that Subhash told him the truth before. He adds that Pragya had told him about Subhash’s crime. He tells that Subhash is responsible for those people’s death. Subhash tries to run away, but gets arrested. Judge announces Abhi free from all the accusations. Abhi gets freed all thanks to Pragya. Abhi and Pragya have a moment of joy.

Aaliya and Tanu return home, and don’t know about Pragya’s evidences. Aaliya gets mad on herself, that she believed Gaurav. She curses herself that she couldn’t save her brother. She cries for Abhi. She tells Tanu that Gaurav cheated them. Tanu asks her to calm down. She tells that they shall call Gaurav and scold him. Aaliya tells that nobody knows about Gaurav. She thinks Pragya would have got another hearing date, she has no proof for Abhi’s innocence. Pragya hugs Abhi with love. The lawyer congratulates them for winning the case. Pragya gets praised for her filmi entry. Pragya is thankful to Santosh.

Santosh thanks her for getting Subhash caught. He doesn’t want his brother to commit more crimes. Inspector asks Abhi to finish formalities and go home. Pragya asks Abhi to come soon to her, she is waiting for him. Abhi gets a wide smile on his face. Elsewhere, Ranbir goes to make kada for Prachi. He seeks Pallavi’s help. She guides him for making a strong kada. He likes to see the concern in her eyes for Prachi. She tells that she just worries for her son, she loves him a lot. She clears that she never wanted him to marry Prachi, she still dislikes Prachi. After Pallavi leaves, Rhea meets him and angers him by her filthy talks.

He asks her to come out of the past. He trusts Prachi, with whom he wants to spend his life. He asks her not to spoil his family. She tells that she loved him, but he never trusted her. She claims that she can do anything for her true love. Gaurav celebrates his victory. He gets Thapar’s call. He tells that he has a meeting with the foreign investors, he will sell Pragya’s properties and go away. He is very happy and excited. He tells that his life has changed, because Abhi is behind the bars.

Reviewed Rating for Kumkum Bhagya 2nd November 2021 Written Update Abhi rocks: 2/5 This rating is solely based on the opinion of the writer. You may post your own take on the show in the comment section below.