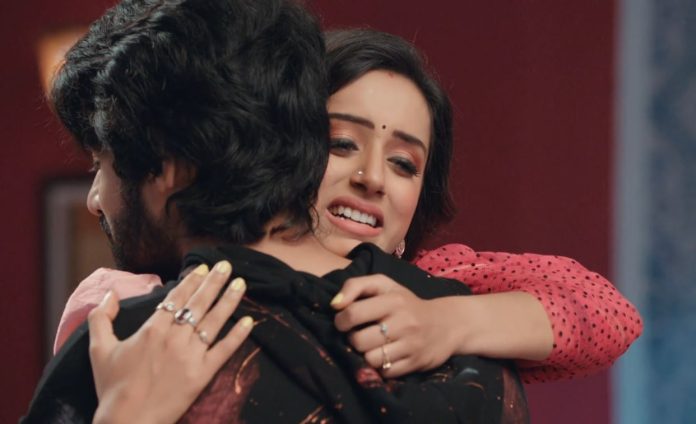 Yeh Hai Chahatein 2nd November 2021 Written Update Prisha returns Sharda and Rudra get shocked seeing Sanya alive in the video brought by Mishka. Mishka asks Rudra to work on his part of the deal Rudra starts giving Msihka a lesson on the importance of marriage. Mishka tells Rudra that she is not interested in his lectures. Rudra agrees to marry Mishka as per his deal. Mishka calle the pandit and some people she had arranged for her marriage. Mishka leaves to get ready revealing that the registrar will too arrive to get her and Rudra legally married. Sharda asks Rudra to think once before marrying Mishka. Rudra tells Sharda that he can do anything for Prisha.

On the other hand, Armaan makes Prisha sit in his car. He shares his happiness with Prisha of being with her. He tells her it was his dream to spend his life with her. Prisha cries hearing all this. Armaan asks her why she is crying and asks her if she is fine? Prisha says she once wanted to see Rudra. Armaan says he can’t do it as she is dead for everyone. Seeing Prisha weeping and sad, Armaan allows her to see Rudra but not meet him. He warns her that she shouldn’t be seen by anyone as it could land her and her unborn child in prison.

Prisha gets shocked seeing Rudra marrying Mishka. Armaan too seems shocked. He then feels happy seeing Prisha shocked. Prisha thinks Rudra moved easily on and is marrying Mishka. She feels that nothing is left for her to stay in India. Arman takes advantage of the situation and instigates Prisha against Rudra. He puts fuel in the fire. Armaan asks Prisha to forget Rudra and start a new life with him. Lawyer announces that Rudra and Mishka are legally married to each other. Prisha leaves from there crying and in anger. Rudra asks Mishka to take him to Sanya.

Mishka takes Sanya and Sunil’s location from Reshma. Rudra grabs Mishka in her wedding dress at Sanya’s location. On the other side, Sanya finds Sunil missing. Rudra reaches Sanya and gets angry at her for faking her death. Sanya reveals to Rudra that she was just a pawn in Armaan’s plan. She further reveals that Armaan even used her to get Prisha. Rudra refuses to believe Sanya and starts strangling her neck. He blames Sanya for trapping Prisha in her fake murder.

Inspector Chautala reaches there and asks Rudra to leave Sanya as she will handle her. She requests Rudra to leave Sanya. Inspector Chautala blames Sanya for Prisha’s death. She says to Sanya that she wishes that Prisha could have seen her alive. Prisha from behind comes there. Rudra smiles seeing Prisha. Prisha and Rudra hug each other tightly, shocking everyone. Prisha reveals that she is alive. Rudra reveals that it was his and Prisha’s plan. He asks Sanya if she thinks that only she can trap people?

Inspector Chautala agrees to Rudra’s plan. He says he wants to meet Prisha once to explain his plan. Inspector Chautala agrees and leaves. Flashback ends. He further reveals that he used Prisha’s dizziness due to Karwachauth fast to make Armaan believe that Prisha is pregnant. Again a flashback is shown where Rudra met Prisha in prison to discuss his plan. Rudra is seen explaining to Prisha that she has to pretend to be pregnant in front of Armaan. He explains to Prisna that Armaan will then kidnap her and make her believe that if she comes in front of the world, her upcoming child will take birth in prison. Rudra also reveals to Prisha that Inspector chautala is helping them in their plan.

In detail, Rudra explains to Prisha that Armaan will make her believe that he loves her and they can start a new life abroad. Prisha will agree to support Rudra in his plan to expose Armaan. Rudra will give Prisha a spare phone to be in contact with him. Flashback ends and Rudra tells Sanya that everything went as per his plan. Rudra tells Sanya that Armaan even made Prisha see his and Msihka’s marriage to instigate her. Prisha reveals that not even for a minute doubted her. She tells that she fooled Armaan. Prisha says to Sanya that her and Rudra’s plan could have failed due to Digvijay’s call when she was trying to get her location from Armaan.

Rudra reveals that Mishka helped them and told him that she met Sunil’s girlfriend. He further reveals that Reshma told him everything about Armaan’s plan of Sunil doing Sanya’s murder makeup to make everyone believe that she died. In the next episode, Prisha will tell Inspector Chautala that she left Armaan in the mall. Next, Rudra will shock and surprise the family by bringing Prisha home. Everyone will get emotional. Inspector Chautala will arrive and reveal that all charges against Prisha are taken back. She will also reveal that she has some bad news too.

Reviewed Rating for Yeh Hai Chahatein 2nd November 2021 Written Update Prisha returns: 4/5 This rating is solely based on the opinion of the writer. You may post your own take on the show in the comment section below.