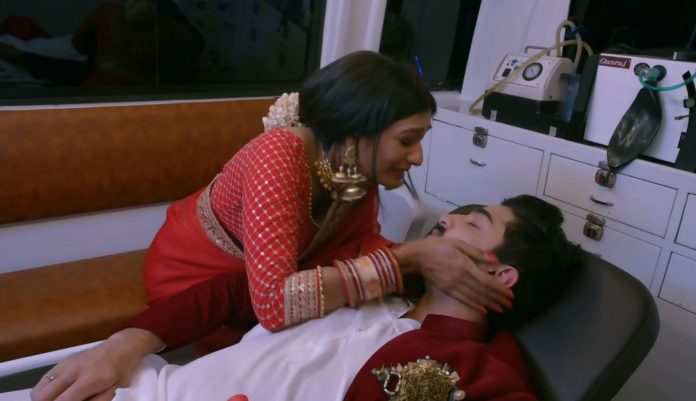 Bhagya Lakshmi 4th November 2021 Written Update Death twist Rishi cuts off his ties with Lakshmi, and falls in a grave danger in the next month. The snake is still around on the terrace, where Rishi is talking to Malishka on the video call. The moment he breaks the chain gifted by Lakshmi’s family and declares that his relation with Lakshmi is finished, the snake gets close to bite him. Malishka sees the snake behind Rishi and screams. She alerts Rishi to look behind and just run. Rishi reacts on hearing this. He looks behind. The snake bites on his hand. Rishi faints down after the snake bite. The family reaches Rishi and finds him bitten by the snake.

Neelam calls the doctor for Rishi, while Lakshmi attends him. Neelam asks the doctor to save Rishi. Doctor sees the same snake on the video call and tells that the snake is really poisonous, Rishi won’t even have more than 30 minutes to save his life. He asks them to get Rishi to the hospital as soon as possible. Lakshmi hugs Rishi. She takes him to the hospital. She stays with him in the ambulance. She prays for Rishi. Malishka tells Kiran that she is guilty, Rishi fell in danger because of her.

She adds that she fought with him and he had to go to the garden to speak to her. She blames herself and cries. Kiran consoles her daughter. Rishi has less time to reach the hospital. The ambulance gets stuck in the traffic jam. Lakshmi gets down the ambulance and checks the long jam. She is worried and races against time to save Rishi. She asks Rishi to please open his eyes.

Rishi starts expelling foam from his mouth as a result of the poison spreading in his body. Lakshmi is stunned and scared to see this. Lakshmi has no option than to suck out the poison from Rishi’s hand. Virender consoles Neelam in the state of worry. Neelam makes him away and reminds him that their relation isn’t a normal one. Ayush comes to tell Lakshmi about the jam getting cleared. He is shocked to see Lakshmi taking the poison onto herself to save Rishi’s life. He cries seeing her true love for Rishi. Lakshmi gets dizzy and starts turning blue by the poison effect. Ayush worries for her when she falls unconscious, after saving Rishi’s life. Will Lakshmi survive? Keep reading.

Virender and Neelam have an argument for Rishi and Lakshmi’s marriage. He tells that Lakshmi is Rishi’s protector. She tells him that Rishi and Lakshmi will just have a relation without love, she won’t ask him to love Lakshmi. Rishi tells Malishka that Lakshmi made him wear the engagement ring. He removes it and throws it away, while Lakshmi gets tensed sensing a bad happening. Lakshmi recalls her marriage with Rishi. He tells Malishka that he will break every sign of his marriage just for her sake.

He tells that his marriage with Lakshmi is over. Malishka gets joyed up. She sees the snake going to bite him. She asks him to look back. Rishi gets a shocked. The snake gets close to him. Rishi tries to run away. Malishka and Rishi’s call gets disconnected. She calls him back. Rishi tries to get rid of the snake. He puts his hand forward. He gets bitten by the snake. Virender asks Neelam to just think about Lakshmi. She refuses to him. Dadi asks him to let it be. She asks him to let the fate decide for Rishi and Lakshmi. Malishka calls the landline. She asks Lakshmi to save Rishi from the snake.

Lakshmi is shocked to hear this. She tells the family about Rishi. They run to the garden to save Rishi. Neelam loses her cool and attacks the snake with a rod. She kills the snake in rage. Ayush asks Neelam to leave it. Rishi tells that he isn’t able to keep his eyes open. Virender and Neelam try to contact a doctor. Rishi falls unconscious. The family panics. They try to get him conscious. Doctor talks to Virender, who tells about the snake bite. Doctor asks them not to give water to Rishi. Lakshmi takes care of Rishi. Neelam tells the doctor that Rishi is bitten by the snake, they need immediate help.

Doctor asks them to get Rishi to the hospital. He tells the chances of getting paralyzed. He asks them about the snake, so that he can prepare the medicine before Rishi reaches. Neelam shows the dead snake to the doctor. Doctor tells her that the snake is really poisonous, she should get Rishi to the hospital as soon as possible. Neelam asks him how will they get him so soon. She asks for some immediate relief. Doctor tells that Rishi can get saved if anyone sucks the poison out, but an expert has to do it, any normal person doing this can die.

Lakshmi asks Rishi why did he not hear her and come inside the house. Rishi finds her crying for him. He recalls his words to Neelam that he is cheating Malishka by being with Lakshmi. He knows that he can’t get saved if he breaks the relation with Lakshmi. Ayush tells them that the ambulance has arrived. Lakshmi takes care of Rishi and cries for him. Malishka learns about the snake attack. She cries for Rishi. She blames herself that she was happy seeing Rishi break the chain and remove the ring. She tells that Rishi was breaking his relation for her sake. She feels he is getting punished because of her.

Kiran tells that Rishi’s threat will end until he is with Lakshmi. She adds that Malishka has made him break the marriage with Lakshmi, that’s why he has fallen in danger. She asks Malishka to wait for some months, instead pushing Rishi towards his death. Malishka cries for her love. Kiran asks her not to act as Rishi’s wife, and accept that Lakshmi is his wife and his savior. She tells that just Lakshmi can save him. Malishka calls Neelam and tells her that she is coming to see Rishi. Lakshmi and Ayush take Rishi in the ambulance. Lakshmi assures Rishi that he will be fine. She worries seeing the long traffic jam. Stay tuned.

Reviewed Rating for Bhagya Lakshmi 4th November 2021 Written Update Death twist: 5/5 This rating is solely based on the opinion of the writer. You may post your own take on the show in the comment section below.