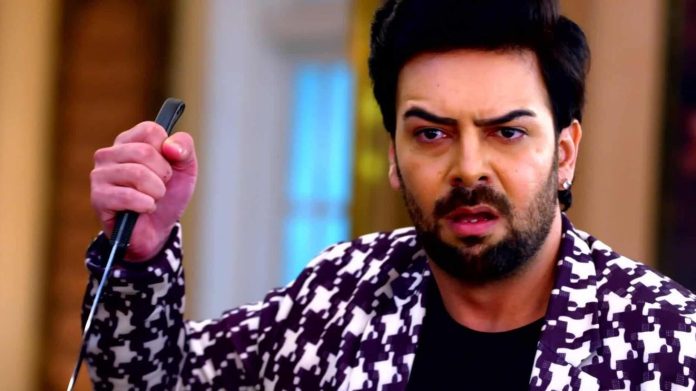 Kundali Bhagya 4th November 2021 Written Update Prithvi exposed Preeta admits in front of Prithvi that she knows about his crimes, how he has tried to bribe Sandeep to make him frame Rishabh and later, he attempted to kill Sandeep. She is aware of his entire crime lists. She still gives him time to react. Prithvi tries hard to make her speak up about Sandeep, but in vain. She gives him a befitting reply and sends him away. His worried face makes Kritika tense about him. Kritika thinks he is handling the business all alone in the absence of her brothers Karan and Rishabh, that’s the reason that Prithvi is so stressed. She doesn’t know the real reason for his tension.

Prithvi decides to get rid of Sandeep for once and all, before Rishabh’s case hearing. He realizes that he just has few hours left to save himself. He looks for Sandeep everywhere in the house. He finally finds Sandeep resting in the living room. He finds his prey and goes to attack him with a dagger. He wants to stab Sandeep to death. Sandeep gets conscious at the same time and runs to save his life. Its actually Preeta’s plan to catch Prithvi red-handed. Prithvi stabs Sandeep, while the latter moves in the nick of time falls down the wheelchair.

Prithvi tells that Sandeep won’t be alive now. The lights get on in the living room. Prithvi is shocked to see Preeta and Luthras in front of him. He is exposed in front of everyone. Preeta tells him that he is really trapped this time. He wants to find a way to save himself. What story will Prithvi come up now? Preeta has already threatened him that she will write his end. Is this Prithvi’s end? Comment below. Keep reading.

Prithvi checks Bani, Kareena and Mahesh’s rooms. He feels they are sleeping in peace. He doesn’t find Sandeep anywhere. He thinks where did Preeta hide him. He gets in Preeta’s place to think where will he hide Sandeep to save his life. He tries to understand Preeta’s plans. He tells that he would have changed Sandeep’s location time to time to save him. He is glad that he is competing with a smart enemy. He feels she isn’t the smartest, Preeta will herself show him the way to Sandeep. He tells that he is the one ruling and winning the game. He adds that nobody knows his madness, he can hurt himself to give a wound to other. He wants to trouble the Luthra family.

He doesn’t think that Sandeep is in Preeta’s room. He goes to find Sandeep. Shrishti tells that she has an idea to secure Sandeep, they will keep Sandeep safe by shifting him to different rooms, Prithvi won’t be able to find him. Sameer tells that Prithvi shouldn’t see him. Preeta tells that if Prithvi asks them, then they will lie to him, Prithvi shouldn’t find Sandeep at all. Sameer praises Preeta and Shrishti for their smart idea. Rakhi asks them if Prithvi will believe them. Shrishti tells that he will only believe Kritika, not them. She asks them to shift Sandeep to the guest room.

Preeta goes to attend Pihu. Sameer goes to keep an eye on Prithvi. Shrishti calls Kritika and does a drama to inform her about Sandeep’s presence in Karan’s room. Kritika wonders why did Shrishti tell this to her. Prithvi overhears the conversation. He asks Kritika where is she doing. She tells that Shrishti called her by mistake and told that Sandeep is in Karan’s room. Shrishti knows that its just Sandeep who can save Rishabh from the blames in the court. Prithvi tells that he likes to play the hide and seek game. He thinks Luthras aren’t smart. He goes along with Kritika to check Karan’s room. He doesn’t find Sandeep here. Kritika tells that maybe she heard it wrong. He tells that its just a drama.

She asks him the reason for his angered behavior. She wants to know what’s the problem. He apologizes to her. He tells that he is okay. He finds Shrishti taking a wheelchair. He thinks Sandeep would be sitting on that wheelchair. Kritika finds his behavior really odd. She thinks to find out. Prithvi thinks he is wrong to underestimate the Luthras, they are shifting Sandeep to save him. He goes to the kitchen and gets some kerosene bottles. He makes a plan to reach Sandeep. He wants Preeta to show him the way herself. He takes a dagger as well. Preeta and Shrishti bring Sandeep to the guest room.

Sandeep gets conscious. Prithvi goes to Sameer’s room and pours the kerosene. He wants Luthras to play with the fire and get to ashes. He is sure that Preeta and Sandeep will stop playing hide and seek, and come out in front of him. He wants the family to get busy in putting off the fire, so that he can get time to find Sandeep alone and kill him. He tells that Sandeep’s game will be over. He burns the room and makes a leave. Preeta and Rakhi get worried seeing the smoke in the house. Shrishti tells that the smoke is coming from Sameer’s room. They run to see the cause of the smoke.

They see the room set on fire. Prithvi’s plan works. They all run to blow off the fire, leaving Sandeep alone. Prithvi knew their predicted move. He goes to the guest room and finds Sandeep. He meets Sandeep and shocks him showing the dagger. He threatens Sandeep. Sandeep begs him to spare his life. Prithvi doesn’t have pity. He stabs Sandeep, but the latter jumps away to save himself. Sandeep tries hard to fight Prithvi. He shouts for help. Preeta tells Rakhi that its Sandeep’s voice. She worries that nobody is with Sandeep. They run back to Sandeep, who reaches the hall and hides there.

Prithvi looks for him. He hides seeing Preeta coming. Preeta finds Sandeep lying unconscious. Prithvi doesn’t want to waste time and just kill him. He feels good doesn’t exist in the world now. He wants his evil to win. Shrishti tells Rakhi that Sandeep would have come for a walk and fell down. Rakhi asks Sameer to get a blanket for Sandeep. She tells Preeta that they will leave Sandeep to rest in the open air. Sameer tells that he will stay with Sandeep.

Preeta makes this idea to leave Sandeep alone as a bait to catch Prithvi. Prithvi waits for Sameer to go. Sameer acts to go away to get some water for himself. Prithvi comes out from the hiding to hunt for his prey. He goes to kill Sandeep. He doesn’t realize that Sandeep is shifted once again. He gets caught red-handed while attempting to kill Sandeep. Preeta declares that Prithvi is really trapped. What will happen next? Too exciting to watch the next episode. Keep reading.

Reviewed Rating for Kundali Bhagya 4th November 2021 Written Update Prithvi exposed: 5/5 This rating is solely based on the opinion of the writer. You may post your own take on the show in the comment section below.