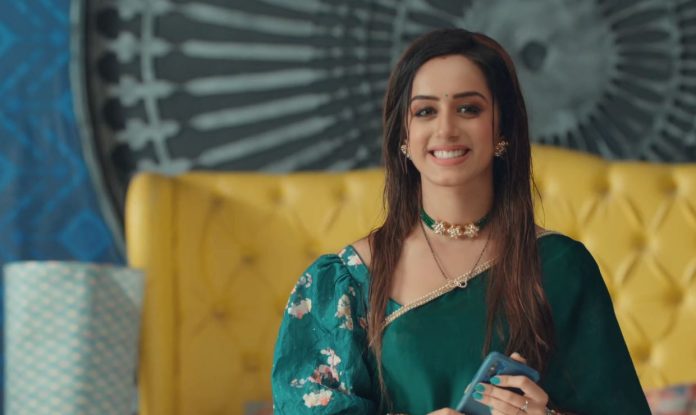 Yeh Hai Chahatein 5th November 2021 Written Update Prisha’s Big surprise Rudra parises GPS’s way of convincing Vasudha. He asks Vasudha if she is still angry with GPS? Vasudha replies no and makes GPS make her wear the gajra he brought. GPS gets romantic with Vasudha, Rudra coughs and interrupts them. Prisha and Rudra tease GPS and Vasudha. Rudra and Prisha take a leave from Srinivasans. Prisha makes a face and while driving Rudra asks her what happened? Prisha asks Rudra to see that her father is so romantic and advises him to learn from GPS. She asks Rudra why he never buys gajra for her?

Rudra says he is more romantic as he plans romantic nights for her. Prisha calls his romantic plans as poppat plans. She irritates Rudra calling his plans as poppat plans. They stop in between to have ice-cream. Rudra finds Prisha eating ice-cream like a kid. He calls her cute. Rudra and Prisha get romantic in the middle of the road. He applies ice-cream on Prisha’s face and eats it from there. Prisha feels shy and pushes Rudra away. Rudra tells her to not care about other people as she is his wife. Prisha says they should also care about the place. Rudra replies that he can only see her now.

Param stops his car behind Prisha and Rudra interrupting their romance. He praises Prisha and Rudra’s romance. Param tells them that he heard a lot about their love story on social media but feels vow to see it live. He also says that he wishes to have someone in his life. Rudra feels himself as a lucky man. Prisha says whose heart is true and pure, that person surely gets his or her true partner. Rudra and Prisha tell Param that he will soon find a good girl for himself. Param thanks them and takes a leave saying that he will be bringing important documents for Rudra’s signatures next morning.

Next morning, Prisha runs behind Saaransh to feed him. Saaransh runs away. Rudra comes there and hugs Prisha from behind. He reminds her that she called him non- romantic. Rudra tells her that now he will show her how romantic he is? His and Prisha’s romance again gets interrupted by Param once again. Param apologizes for interrupting. Prisha leaves to see Saaransh and the kitchen. Rudra makes Param sit. He takes the paper from Param and signs them without reading. Rudra shares with Param that Prisha feels he is not romantic. Param offers Rudra to do something for him.

Param informs Rudra that he can arrange a romantic date for him and Prisha in his new recording studio. Rudra agrees and thanks Param with a hug. Param takes a leave. GPS on the other side meets Subu and thanks him for lying to his family. Subbu asks him if anyone doubted him? GPS replies no one. He asks for another help from Subu. He tells Subu that he will lie to Vasudha that he will be with him on Sunday. Subbu asks GPS that till when he will hide the truth from Vasudha. GPS says the truth should never come out as it will not be good for anyone. Subu agrees to help GPS.

On the other side, Prisha gets a big romantic surprise from Rudra. Rudra tells Prisha that now he will show how romantic he is? He sings Prisha and Saaransh’s family song “Will You Marry Me” for Prisha. Both of them dance and get romantic with each other. Prisha too feels happy with the surprise. He lifts Prisha in his arms and kisses her forehead. Prisha asks what us this? Rudra says it’s a surprise from her romantic husband. He takes her to the decorated room and asks how she found his surprise? Rudra further asks Prisha if he isn’t romantic.

He lays Prisha on the bed. Prisha starts sneezing. Rudra finds the flowers on their bed are the flowers which Prisha is allergic to. He takes her outside the room. Prisha continues sneezing and scolds Rudra for his stupud plan. Rudra reveals Param arranged it for them and the latter wasn’t aware of her allergies. Prisha tells Rudra he can’t do anything. She makes Rudra happy by telling him that now she will plan their romantic night. Next morning, Vasudha asks GPS to take her for Diwali shopping on Sunday.

GPS says he will not be able to go shopping with her on Sunday. He tells her that he has to go outside with Subu and his friends. Vasudha gets upset and tells him that he doesn’t love her. GPS tries to convince Vasudha by being romantic. He apologizes to Vasudha by saying that it was already planned. GPS promises Vasudha that next week he will spend with her. Vasudha gets convinced and allows GPS to go with Subu and his friends. GPS leaves for some work. At Khurana mansion, Rudra wakes up and gets mesmerized by seeing Prisha drying her hair.

In the next episode, Rudra will reveal to Param that Prisha got allergic to flowers and their night got ruined. Param will apologize for his mistake. A hotel staff will inform Rudra that Prisha is waiting for him in the restaurant. Rudra will call a girl from behind thinking that she is Prisha. Vasudha will see GPS getting someone’s call late at night. As GPS will leave, Vasudha will doubt him being in an affair with some woman. Stay tuned.

Reviewed Rating for Yeh Hai Chahatein 5th November 2021 Written Update Big surprise: 4/5 This rating is solely based on the opinion of the writer. You may post your own take on the show in the comment section below.