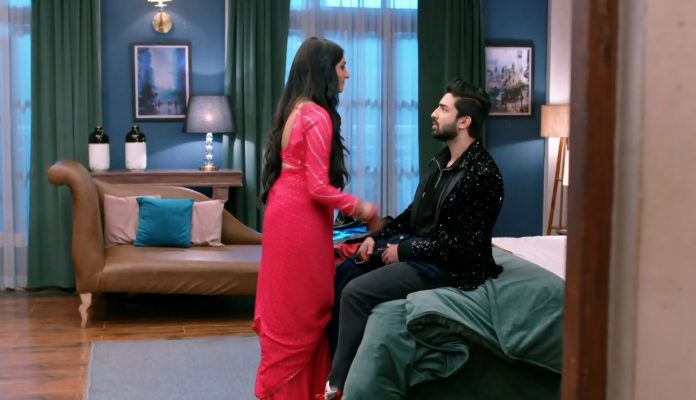 Bhagya Lakshmi 10th November 2021 Written Update Rishi’s love for Lakshmi Rishi and Lakshmi have a sweet moment. He tells her that he feels good when she scolds him. He permits her to scold him, but only with love. She plays a prank on him, and shouts snake. He gets scared and jumps on the bed. She bursts into laughter. They pull each other’s cheek. Rishi turns into Lakshmi’s caring friend. He believes she is a true and selfless girl. He doesn’t want to lose her. Malishka overhears Karishma and Kiran’s conversation. Karishma asks Kiran to stop Malishka’s mad behavior. She warns that even Malishka’s fate will become like Kiran’s.

Kiran tells that Malishka really loves Rishi, she is just insecure. She adds that Malishka can’t tolerate Lakshmi taking her place in Rishi’s life. Karishma asks her to send her daughter to Rishi and make them sort their differences, else Malishka will lose out everything, and their fears will turn true. Malishka stays tempered. Kiran finds Rishi and Lakshmi sharing a cute moment at home.

Ayush tells Rishi to start massaging Lakshmi’s hair. Rishi asks Lakshmi how much oil she uses for her hair as he has never massaged any girl’s hair before. Lakshmi tells her that she will have to wash her hair if she uses oil today. Rishi then starts massaging her hair with hands only, without any oil. Virender tells Ayush that he has given him a really good massage and he is feeling sleepy now and leaves the room, Ayush also follows him and leaves Rishi and Lakshmi alone. As they leave, Lakshmi tells Rishi that he does not have to do the massage now as they have left.

Rishi tells her that it does not matter whether they have left or not, it is not necessary that we get anything only when we want it and continues massaging her hair. Rishi and Lakshmi share a heartfelt moment when Lakshmi tells him that even her father used to massage her hair like this. Rishi asks whether she misses her father, to which she replies that yes she misses her a lot especially when she is with him. She further tells him that his father used to take care of her like him and says that it will be her first Diwali without her father. She continues to share that his father used to decorate the house with lights and he used to take her help while putting up the lights just to make her feel special.

She tells him that she used to feel as if there will not be any lights without her nor will there be any Diwali celebration, she used to feel as if he did everything for her only. Hearing this Rishi tells her that wherever his father is, he is watching her and he too will wish that she feels happy. Later Oberois decks up for the Diwali Party and Rishi asks Lakshmi to help him put the lights on. Virender and Ayush see them and Virender asks Ayush whether taking Balayein really works to which Ayush says that Dadi tells that it works. Virender considers it as superstition and Ayush leaves to take a call.

Later, Rishi and Lakshmi put on the lights and Virender takes their Balayein. Lakshmi thanks Rishi and Rishi thanks him in return, Lakshmi says that she knows why he is doing this for her. Lakshmi starts doing the Rangoli while Karishma gets irritated looking at her as she feels making Rangoli in this huge mansion is out of their standards. Later, Lakshmi’s aunt seems to be in a bad mood as she asks Lakshmi’s sister about their visit to the Oberoi mansion so far. She starts counting to which her aunt gets erred and calls her mindless. She asks her daughter what she has done so far by visiting the Oberoi mansion as nothing has bloomed between Ayush and Her. She gets awkward listening to her mom’s thoughts. Lakshmi’s aunt tells her to woo Ayush so that she can become the daughter-in-law of the Oberois.

Ayush tells him that if he did not like the Rangoli then he would have told her, to which Lakshmi asks him if it is true that he hasn’t liked the Rangoli and Rishi tells her that he really liked the Rangoli and says sorry to her. Virender pretends to scold Rishi and asks him to fix the Rangoli. He further tells Lakshmi that she needs to control her husband as her husband is getting out of hand and she should learn how to control her husband. He asks Lakshmi to keep Rishi at her control. Rishi asks him to scold him the way he is scolding Lakshmi now and tells Lakshmi that whenever he scolds him he bursts like a volcano.

Virender tells him not to change the topic and make the Rangoli. Lakshmi tells him that there is no need for that and Ayus tells her not to make Virender angry as he will burst like a volcano only. Rishi then agrees to fix the Rangoli and starts helping Lakshmi in fixing it. Virender and Ayush enjoy seeing them working together. Later Malishka’s mother arrives at Oberoi mansion and sees them together. Lakshmi welcomes her by touching her feet and tells her that Malishka has become her best friend now.

Lakshmi finds Rishi worried and asks him what is wrong to which he replies that he is worried about a deal. Listening to this she tells him to leave everything to God as she does the same and asks him not to worry about these things and enjoy spending time with his family. Rishi feels better listening to her when Malishka’s mother interferes by telling that Malishka was right about the two. She further says that Malishka has told her that both of them are a really nice couple. Neelam gets surprised seeing Malishka’s mother there and welcomes her wholeheartedly.

Neelam praises Lakshmi’s Rangoli and her efforts for the Dinner party. Hearing this she thinks about Karishma’s warning and gets worried. Later Lakshmi accidentally falls on Rishi while preparing the diyas. The servant laughs seeing them like this to which Rishi gets irritated and tells Lakshmi that what is so funny about this as they are a married couple and this is a normal thing to happen between wedded couples. Lakshmi gets shy and leaves from there and Rishi too feels embarrassed. Lakshmi smiles at him and they exchange a sweet gesture with their eyes.

Reviewed Rating for Bhagya Lakshmi 10th November 2021 Written Update New love: 3/5 This rating is solely based on the opinion of the writer. You may post your own take on the show in the comment section below.